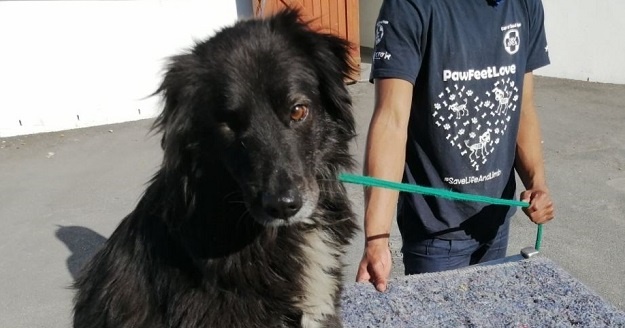 Meira, the faithful companion of a 71-year-old man who lives under a bridge in Lansdowne.
Facebook/Cape of Good Hope SPCA

A suspect who allegedly stabbed the dog of a homeless man has been released on a warning after appearing in the Wynberg Magistrate's Court on an animal cruelty charge on Wednesday.

Brian Solomon, 32, appeared in the dock for the knife attack on Meira who was the faithful companion of a 71-year-old man who lives under a bridge in Lansdowne, Cape Town.

He was arrested on Tuesday after Inspector Jeffery Mfini of the Cape of Good Hope SPCA traced him to the Flamingo informal settlement.

"He violently took his frustrations out on Meira who was doing nothing but sitting contentedly with her owner," she alleged.

The elderly man was unable to defend his dog as the 20cm blade was allegedly plunged into her back. Her alleged assailant then lifted her up and kicked her before walking away.

The SPCA was alerted to the incident about a week later when it received a complaint of a wounded dog living with a man under the bridge in Imam Haron Road.

Mfini responded and took a badly injured Meira to the SPCA's animal hospital for treatment.

Abraham said it was clear her owner had taken Meira for treatment as the wounded area had been shaved and cleaned.

"But the prognosis was grim," she added.

Meira was unable to use her back legs and no longer had any feeling in her hindquarters.

She was euthanised to prevent further suffering, Abraham said.

"Her owner was heartbroken, devastated, that his companion's life had essentially been cut short," she added.

Mfini managed to trace the suspect who was known to the inconsolable owner. He was arrested on charges of animal cruelty on Tuesday.

"This is sadly not an isolated incident. People often take their frustrations out on the vulnerable, causing sad and unnecessary pain," Abraham said.

Two months ago, an abusive former lover allegedly stabbed a woman's pet when she refused to hand it over to him.

The dog named Brave Sometime was left critically injured with a deep wound to his neck.

His owner had left her former partner only to have him return and allegedly set her home on fire in retaliation.

When she returned from the police station after reporting the incident, the man was waiting. He demanded she hand over the family dog and when she refused, he restrained the dog and allegedly stabbed him.

Charges relating to the Animals Protection Act were laid against the 44-year-old suspect who was arrested.

At the time, Abraham said often an intimate partner would use animal maltreatment as a coercive tactic when their partner had a valued bond with an animal, or an emotional attachment that could be exploited.

"It is for this reason that an intimate partner and gender-based violence present very real threats to any animals within the household too.

"Animal cruelty is just as much a criminal offence as domestic violence and if you should find yourself in a position where you fear for your safety and that of your companion animals, please let us know.

"We will assist you with the removal of your pet for safekeeping, the compilation of a criminal docket, formulation of charges and the representation of any pet injured by your intimate partner in a court of law."

Abraham urged those who applied for a protection order to include the emotional or psychological suffering and distress caused when witnessing pets being treated cruelly.

"This will then qualify these acts as domestic violence in terms of the Domestic Violence Act and afford your pet some level of protection."