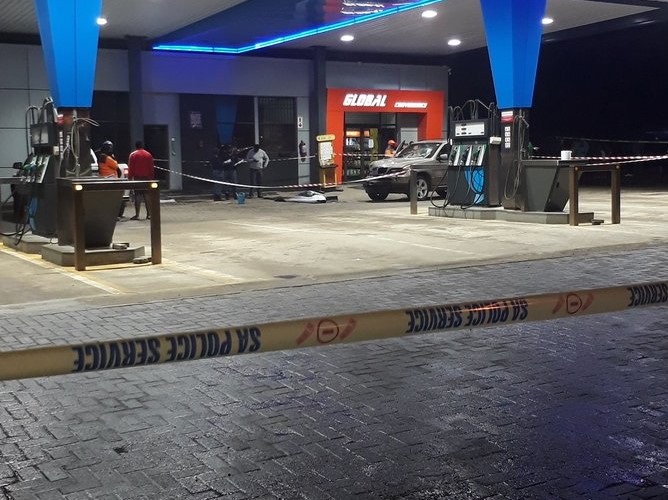 Gauteng police say a man who shot and killed himself in full view of motorists at a petrol station in Sharpeville on Tuesday had allegedly shot several people earlier in the evening. (Photo via @Membrane_ZA, Twitter)

Two of the three people allegedly shot by a man who later killed himself in full view of motorists at a petrol station in Sharpeville have died, police said on Wednesday.

News24 reported earlier that Gauteng police said a man who shot and killed himself in full view of motorists at a petrol station in Sharpeville on Tuesday had allegedly shot several people earlier in the evening.

According to police spokesperson Captain Kay Makhubele, the motorist who was in a BMW X5, had allegedly shot several people in Vanderbijlpark at around 19:00.

He was later found dead at a filling station in Sharpeville after allegedly shooting himself, Makhubele said.

Makhubele said another victim who was also shot was still in hospital.

I just got at the garage in my kasi (Sharpeville) to fill in petrol..and this guy parked in front of my car, got out and shot himself... ?????????? Batho ba imetswe hleng pic.twitter.com/2pxpTLx1c9

CCTV footage believed to be of the incident shows a luxury SUV pulling into the petrol station and stopping. A man emerges from the driver's seat with his hands in the air. An object can be seen in his right hand.

He appears to be talking, but it's unclear if he's speaking to anyone in particular.

He then walks a few metres ahead of the car before stopping and putting his right hand to his head. His body suddenly jerks and he falls to the ground.

All the while, other motorists are parked nearby.

"The motive of the shooting is unknown. Police are currently trying to establish who the person is," said Makhubele.

He added the people who were earlier shot by the motorist were taken to hospital.

Every day ke payday for Daily Lotto players
Full list of lottery results
Lockdown For
DAYS
HRS
MINS
Voting Booth
When a Covid-19 vaccine for under 16's becomes available, will you be taking your children to get it?
Please select an option Oops! Something went wrong, please try again later.
Yes, immediately!
37% - 2297 votes
I'll wait to see how others respond
27% - 1667 votes
No, I don't think they need it
36% - 2273 votes
Previous Results
Podcasts
PODCAST | MISSING MATTHEW EPISODE 3: Decades of false starts add to a family's despair