Mashaba to brief the media amid resignation speculation 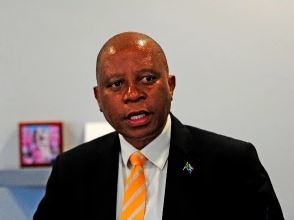 City of Johannesburg mayor, Herman Mashaba is expected to tell the nation whether he is staying put or resigning as the city's number one resident.

Mashaba has called a press briefing where he will outline if he will continue leading the City which is governed by the DA in coalition with the EFF.

News24 reported on Sunday that three sources have been informed that Mashaba intends announcing his resignation.

His call for a press conference came after former DA leader Helen Zille was elected as the party's new federal council chairperson.

Zille has returned quite emphatically into party politics and her announcement prior to her election over the weekend has left many within the official opposition unhappy, including Mashaba.

Three sources - two of them provincial leaders and one national leader in the DA, told News24 on Sunday that Mashaba will announce his resignation from the party.

News24 understands that Mashaba had met with some DA leaders on Saturday where he said he would resign were Zille to emerge victorious.

He said he was "watching developments closely".

We live in a world where facts and fiction get blurred
In times of uncertainty you need journalism you can trust. For only R75 per month, you have access to a world of in-depth analyses, investigative journalism, top opinions and a range of features. Journalism strengthens democracy. Invest in the future today.
Subscribe to News24
Related Links
Mashaba to hold press conference: Will he or won't he resign?
Herman Mashaba: Walking away from Johannesburg would be the DA's biggest mistake
Herman Mashaba: Is the IRR the Guptas of the DA?
Next on News24
LIVE | SA Covid-19 death toll at 50 566 as the number of cases now sit at 1 518 979