Mbalula: Reopening of N2 Umhlatuze River bridge 'by no means a small step' 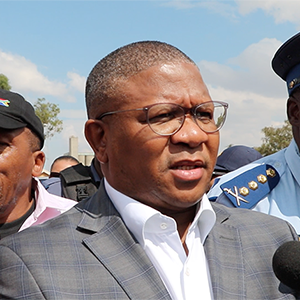 Transport Minister Fikile Mbalula has praised the completed upgrade of the Umhlatuze River bridge between the Mtunzini toll plaza and Empangeni, saying it is "by no means a small step for road users".

Mbalula officially opened the upgraded bridge on Friday, where he emphasised the importance of infrastructure in connecting communities.

"Every gravel stone and every drop of bitumen that make up the surface of our roads represent every road user the road connects to their loved ones and centres of social and economic activity.

"Our road network connects lives, connects communities, connects economies and indeed represent our forward momentum as a nation," he said in a statement released after the ceremony.

Mbalula added the upgrade of the road was in line with the National Development Plan and maintaining road infrastructure.

"The 33km stretch of the N2 between the Mtunzini toll plaza and Empangeni T-junction on the KwaZulu-Natal north coast has for years earned the ignoble reputation as a road of death.

"The many lives lost on this road must spur us into action and decisive interventions that save life and limb and change the behaviour of road users," he said.

The completion of this project means a safer dual carriageway, relieves pressure on this key arterial road due to increasing traffic volumes. The previous lane configuration was inadequate resulting in major delays for motorists, with traffic volumes in excess of 12 000 per day. pic.twitter.com/rghnvyYGj5

While the upgrading of the road will ensure drivers' safety, Mbalula warned this does not mean drivers could now be reckless.

"Our commitment to upgrade and keep our road infrastructure in a pristine condition should not translate to reckless behaviour by motorists who feel emboldened to drive at excessive speeds.

"Those who take advantage of our good roads and place the lives of others at risk will face the full might of the law."

"There is very little doubt that roads are the lifeblood of the economy. They enable movement of goods and people as well as connect economic and social nodes," he added.

We live in a world where facts and fiction get blurred
In times of uncertainty you need journalism you can trust. For only R75 per month, you have access to a world of in-depth analyses, investigative journalism, top opinions and a range of features. Journalism strengthens democracy. Invest in the future today.
Subscribe to News24
Related Links
Mbalula condemns recent wave of taxi violence after 5 people killed
Mbalula lays into Western Cape Judge President following Prasa ruling: 'Does he know how to run...
CCTV footage shows four suspects behind CT train blaze: 'We've seen them, in their kortbroekies',...
Next on News24
LIVE | Covid-19 in SA: Cases rise by 1 931 as death toll goes up by 17