Motshekga says she has no interest in 'hiding' schools without PPEs, as group pickets her visit 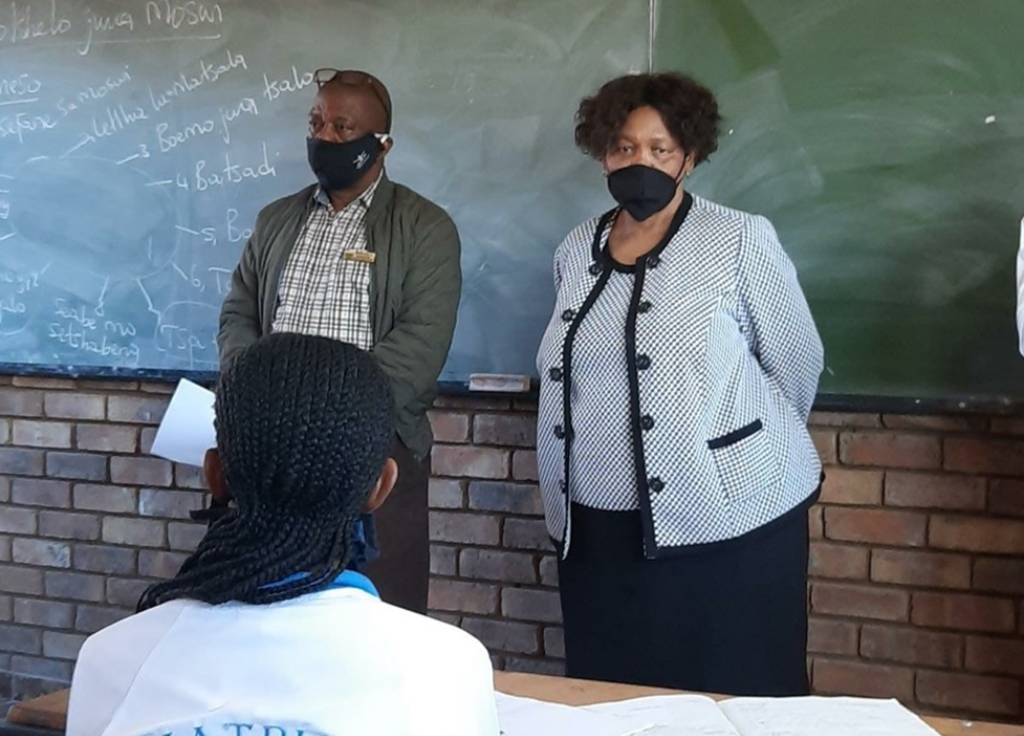 Basic Education Minister Angie Motshekga says people who are aware of schools still without PPEs need to bring the information to the attention of her department.

Motshekga was speaking during a visit to two schools in Lethlabile, in the North West, on Tuesday to assess the return of Grade 12 pupils following their week-long recess.

The minister's first stop was at Eletsa Secondary School, where a group picketed with a banner reading #AngieMotshekgaMustFall.

The group, which comprised of members of the Progressive Student Movement and the Forum For Service Delivery, was barred from entering the premises.

Police were called to monitor the group.

They alleged that the minister was only visiting "privileged schools" with capacity and adequate PPEs, and not those in rural areas with poor infrastructure.

The president of the Progressive Student Movement, Kabelo Nthekiso, said they were calling for Motshekga to resign, because "she had dismally failed to transform the basic education system and sector at large".

Nthekiso added that Motshekga was not cautious on decisions she was making regarding schools during the pandemic.

He said they had told the department that reopening schools was "dangerous".

"The approach she is using is very wrong and we said to her that she must implement more broader mechanism and more comprehensive mechanism to ensure we save the academic year. At large we are even calling the minister to go to the most rural schools around this area.

"There are no PPEs and the state of infrastructure is delapidated. We are calling the minister to stop visiting the most privileged schools around these areas. Let the minister go to rural schools," said Nthekiso. ‎

WATCH | Security Personnel is trying to chase the group outside the school premises. #SchoolReopening (@Sesona_Ngqaks) pic.twitter.com/PNHjTYPyS8

Motshekga added that information that there were still schools struggling with infrastructure was, however, also helpful for the department in order to attend to the problems.

The minister said she had met with the team dealing with school infrastructure on Monday and was told that there was not any school that had not opened because of a lack of water and sanitation. She added that if anyone had information disputing that, it would need to be verified.

"From our national team, because I get information from them, said there is no school that would not have opened because it doesn't have water.

"What they still need to do is; during the rush, they had put tanks on the floor, they had not installed them properly and are busy installing those. I am meeting the sanitation team this evening," said Motshekga.

She also emphasised that the decision to close schools for four weeks was not only based on the rate of new infections, but also outstanding work the department still needed to complete to ensure schools were safe when all grades returned to classrooms on 24 August.

"We had to deal with some of our own challenges that we had. There are things we didn't expect. This thing about comorbidities almost inconvenienced us. We had not thoroughly planned, especially for the 24th group, for substitute teachers, to get budget for temporary teachers..."

We live in a world where facts and fiction get blurred
In times of uncertainty you need journalism you can trust. For only R75 per month, you have access to a world of in-depth analyses, investigative journalism, top opinions and a range of features. Journalism strengthens democracy. Invest in the future today.
Subscribe to News24
Related Links
Lockdown: Anxiety fills Gauteng schools, but principals determined to sail through uncharted waters
Schools under attack
School reopening: Break over for most grades on 24 August, all grades back by 31 August
Next on News24
LIVE | Covid-19 in SA: 453 new cases as death toll hits 88 674

Lucky Sunday for 3 Daily Lotto players
Full list of lottery results
Lockdown For
DAYS
HRS
MINS
Voting Booth
Facebook is facing a fresh crisis after a former employee turned whistle-blower leaked internal company research. Do you still use Facebook?
Please select an option Oops! Something went wrong, please try again later.
Yes, the benefits outweigh the risk for me
32% - 2544 votes
No, I have deleted it
38% - 3016 votes
Yes, but I am considering deleting it
31% - 2454 votes
Previous Results
Podcasts
PODCAST | Ballot Box: Why Facebook is not doing enough against election misinformation