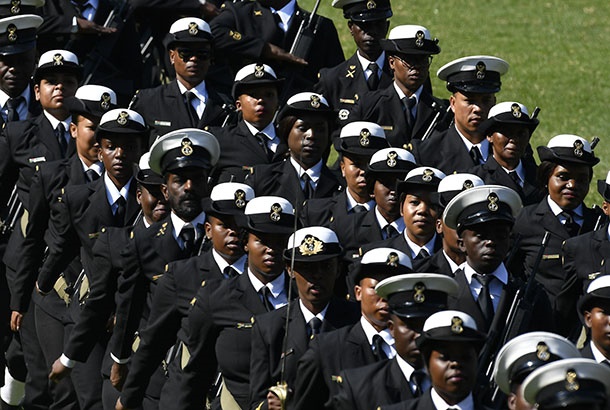 A SANDF parade during the inauguration of ANC president Cyril Ramaphosa as head of state of the Republic of South Africa at Loftus Stadium on May 25, 2019 in Pretoria, South Africa. (Gallo Images/Lefty Shivambu)

A Muslim member of the SANDF is expected to face a hearing in a military court in Cape Town on Tuesday because of her refusal to not wear her headscarf.

The major, who has been a member of the armed forces for the past 10 years, works as a clinical forensic pathologist at 2 Military Hospital in Wynberg.

Her adviser, Nazeema Mohamed, said the major's scarf was worn under her beret and "does not even cover her ears".

It did not obstruct any insignia or military rankings, Mohamed explained. For the past decade, none of the officers she reported to took exception to it.

Mohamed said the action smacked of Islamophobia, sexism and a poor attitude toward women.

The disciplinary action against the major was "shocking", as such steps would not be taken even in conservative countries like the US, she charged.

SANDF spokesperson Mafi Mgobhozi was not immediately available to comment on the matter.

Mohamed said should the SANDF proceed with charges against the major, they would take the matter to court as the action against her was discriminatory.

We live in a world where facts and fiction get blurred
In times of uncertainty you need journalism you can trust. For only R75 per month, you have access to a world of in-depth analyses, investigative journalism, top opinions and a range of features. Journalism strengthens democracy. Invest in the future today.
Subscribe to News24
Related Links
Police investigating the murder of Waterkloof Airforce Base Commanding Officer
Soldier and SANDF impostor charged over presidential inauguration ruse
Stop paying 'millions to protect ministers' and equip SANDF to protect borders - DA's Msimanga
Next on News24
LIVE | Covid-19 in SA: Cases rise by 3 520 as death toll goes up by 10

Super start to the weekend for 3 Daily Lotto players!
Full list of lottery results
Lockdown For
DAYS
HRS
MINS
Voting Booth
Matric results are out! Are you happy with your child's result?
Please select an option Oops! Something went wrong, please try again later.
No, the pandemic really messed up their ability to focus
34% - 62 votes
Yes, they did well given the circumstances
66% - 120 votes
Previous Results
Podcasts
LISTEN | The Inge Lotz Story - a miscarriage of justice