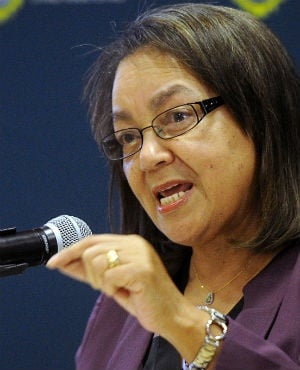 Patricia de Lille has been told to vacate her office and return any City property to the City of Cape Town.

This follows a media briefing on Tuesday during which the DA announced that De Lille was no longer a member of the party.

The DA cited clause 3.5.1.2 in its constitution, which says if a member publicly declares his or her intention to resign, then their membership ceases immediately.

De Lille was given a letter on Tuesday informing her of this decision and told she was being removed as mayor of Cape Town.

'No longer the executive mayor of Cape Town'

"The Democratic Alliance has ceased the party membership of Patricia de Lille.

"This means she has lost her seat as a councillor and is therefore no longer the executive mayor of Cape Town, with immediate effect," said Neilson.

The mayoral committee was also dissolved with immediate effect, and an interim structure will be put in place.

Only Neilson and Smit are political authorities within the City of Cape Town.

The IEC's Reverend Courtney Sampson, however, said it not yet received the notice of vacancy. He added that De Lille had also served court papers on the IEC relating to the DA's vacancy declaration.

In a media statement later on Tuesday, De Lille said her only aim was to clear her name and her integrity after being subjected to "slander" and "bullying" by DA members without being found guilty of anything.

"Once again, the DA’s desperation has led them to take another short cut to get rid of me before following their own due processes and sticking to their principles of fairness to allow me to stand before an impartial tribunal and respond to the untested allegations against me in public," she said.

We live in a world where facts and fiction get blurred
In times of uncertainty you need journalism you can trust. For only R75 per month, you have access to a world of in-depth analyses, investigative journalism, top opinions and a range of features. Journalism strengthens democracy. Invest in the future today.
Subscribe to News24
Related Links
DA's unfair process forced me to seek relief from the courts, says Patricia de Lille
DA leaders to brief media on Tuesday on De Lille's future
DA tells de Lille her membership has ended
Next on News24
LIVE | SA records 1 564 355 Covid-19 cases and 53 663 deaths