On Monday morning, the fire had reportedly spread towards Devil's Peak and the front face of the mountain, affecting Vredehoek and the surrounding areas.

Approximately 4 000 UCT students were evacuated on Sunday after the veldfire reached the campus. The Table Mountain National Park (TMNP) said it believed it may have been caused by a vagrant fire.

On Sunday night, more than 150 firefighters battled the blaze. They had worked around the clock to extinguish the runaway fire which also destroyed parts of the Rhodes Memorial Restaurant and Tea Garden on the slopes of Table Mountain, the iconic Mostert Mill and damaged historic UCT buildings. The Mostert Mill after the fire swept through. (City of Cape Town) The Mostert Mill after the fire swept through. (City of Cape Town)

All academic activity at UCT had been suspended due to the devastating fire that also gutted the HM Pearson, Fuller and Jagger Library buildings.

"The safety of students and staff is paramount. For safety reasons, the campus will be locked down and no one, other than emergency services, will be allowed access," UCT vice-chancellor Mamokgethi Phakeng said.

"We are all anxious about the extent of the damage to the Rondebosch campus. We will provide updates as soon as we are able to do so."

She said the university was unable to confirm the extent of the damage to property, as well as the number or names of the buildings affected.

"Food and emergency accommodation have been arranged for all the students who had to be evacuated earlier today (Sunday). Jessica Lyon, manager of the Rhodes Memorial Restaurant and Tea Garden, said they were still in shock after the fire ripped through the area. (Photo: Dane Marrison)

"The necessary arrangements have also been made to accommodate fasting Muslim students. Food was prepared at Old Mutual's offices in Pinelands, Cape Town, and was distributed to the locations where students were accommodated. The public have been asked to donate any essential items and food which they may wish to contribute, at Old Mutual West Campus, in Pinelands."

Jessica Lyon, manager of the Rhodes Memorial Restaurant and Tea Garden, said they were still in shock after the fire ripped through the area.

"All we know is that we managed to evacuate the clients and staff as quickly as possible. I don't know what the extent of the damage is," she added, relieved that everyone had escaped the flames unharmed.

Powell on Sunday confirmed that UCT students in residences on campus were evacuated, and should private residences need to be evacuated, "DRMC will go door-to-door in affected areas to assist residents".

She said residents have been advised to keep doors and windows closed to keep out smoke caused by the fire. A helicopter gathers water to battle the veldfire that raged from Rhodes Memorial towards the University of Cape Town on Sunday 18 April 2021. Photo: Glen Jones
Supplied Supplied (Instagram/@glenjonesphotos)

"At present, the City has more than 150 of its firefighters on the scene from various stations across the metropole, working alongside the Table Mountain National Park staff, Working on Fire and the Volunteer Wildfire Services. At this stage, the fire is not yet under control. Aerial firefighting support will resume at first light," Carelse said on Sunday evening. 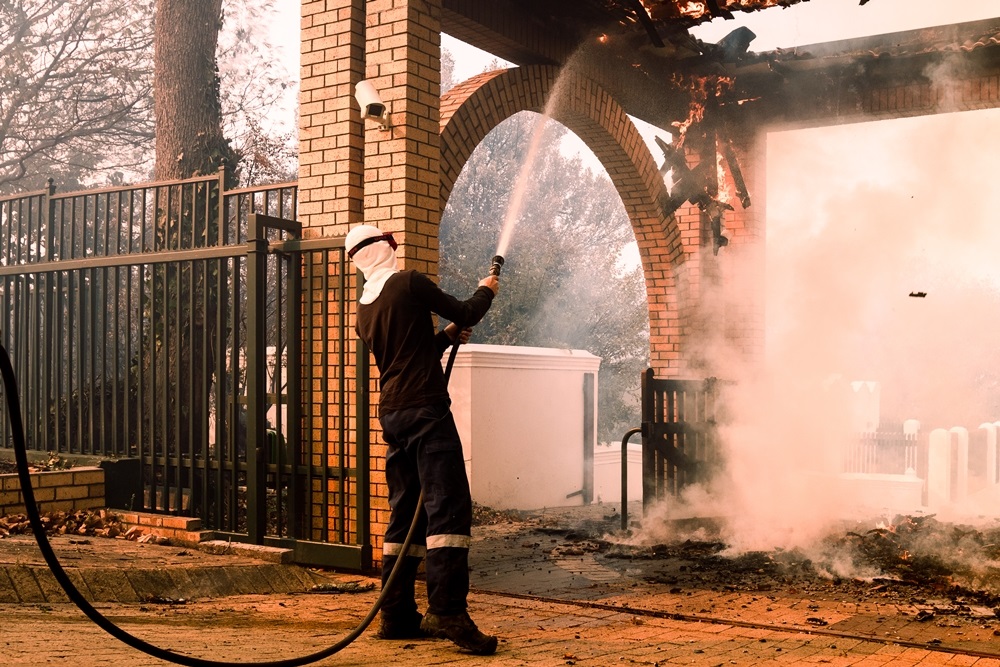 UCT emergency staff member and student Siya Ntuntwana told News24 students started seeing helicopters flying over the campus and were curious as to what was going on.

"Students went out to see what's happening and we realised the fire was coming closer to us. We told students to close the windows because we have curtains and it would have been a disaster. The fire caught the tennis court at the back and the pine trees."

He said some rooms at the residences were damaged.

"There are many structures damaged at the university. Some of the students are staying at the graduate business school and hotels and some have volunteers who offered to house them for now."

Many are panicking and stressing, many are on medication. We are trying to mitigate the situation.

Another student Molemo Molefe, who lives near the university, said her apartment started filling up with smoke, making it difficult to breathe.

Lisette Lombard, who is a frequent hiker at Newlands Forest, told News24 it took the fire only a second to wreak havoc.

"I walked up and saw a small fire and it was far. The next minute after I took a photo the fire started spreading and I had a huge fright when I realised my car was going to burn out.

"I heard two explosions as I was running down, and I thought it was my car. The fire was in front of me, and I had to run away from it," she added.

I think my Car has been destroyed as I cannot reach Rhodes Memorial and think I managed to outrun the fire -can anyone tell me if the cars at Rhodes Memorial are safe and where do I need to run to get away from the fire? Newlands Forest? @wo_fire @cptfrs #fire #CapeTown pic.twitter.com/d0xICuvupS

My car has been destroyed in the fire with other vehicles and the restaurant, but thank God we are safe ?? Never have I experienced a fire that spread so unpredictably fast. I have so much respect for our firefighters ???????? Thank you ?? #capetown #fireforce @wo_fire @cptfrs pic.twitter.com/MK6iEGgENy

Cape Town Mayor Dan Plato, who visited the area on Sunday, said he was saddened that property and historic buildings had been damaged in this fire.

"It is tragic that literary treasures have been lost at the UCT library, but I have been informed that some of the most valuable works were saved by the quick activation of roller doors. Our attention and support remains with firefighters and all role players working to protect further loss of property."

Meanwhile, Capetonians opened their hearts and donated generously to firefighters battling the blaze, dropping off food, water, energy drinks and an assortment of other necessities.

My car has been destroyed in the fire with other vehicles and the restaurant, but thank God we are safe ?? Never have I experienced a fire that spread so unpredictably fast. I have so much respect for our firefighters ???????? Thank you ?? #capetown #fireforce @wo_fire @cptfrs pic.twitter.com/MK6iEGgENy