Dressed in a green shirt with yellow and white polka dots, a blue pacifier in his mouth, two-year-old Thaakir Buzic on Monday led a colourful musical band through the streets of Cape Town, in South Africa - from the safety of his grandfather's arms.

About 20 000 performers divided into dozens of troupes marched in the city centre while playing music and dancing for the annual Cape Town Minstrel carnival.

Returning after a two-year Covid-induced break, the celebration, also known as Tweede Nuwe Jaar, is a family affair for Buzic's relatives.

The boy is the youngest of 13 family members - led by his 68-year-old great great aunt - to take part in the parade as dancers for the 1 000-strong Playaz Inc troupe.

A tambourin in hand, Buzic bounced from one leg to the other as brass players rehearsed outdoors at a school in Mitchells Plain, near Cape Town, on New Year's Eve. "It's in the troupes that my parents met. I was born into it, the same goes with my kids and my grand-kids," said his grandmother, Sadia Daniels, 40, who has not missed a parade since she was born.

"Only the lockdown could keep us away from it... this year we're back on track."

Tens of thousands of people flocked to see the march on Monday.

Minstrels stuck out their tongues and wiggled their hips under the blazing sun to the sound of trumpets and whistles. "We've been camping on this spot since 28 December," said Ruzia Fry, 39, as she sat under one of four marquees set up on the side of a road to accommodate her about 50 family members.

"It's a tradition for us to come here every year."

The festivity has its roots in colonial times, when slaves - some of whom were forcibly brought to Africa's southern tip from Southeast Asia - were allowed to relax on the day after New Year's Day.

They used the time off to dress up, dance and sing. It's now seen as a celebration of the Cape's diverse culture and marks the start of a weeks-long competition where minstrels battle it out for the title of best troupe.

In impoverished, crime-ridden communities with high unemployment rates, joining a band offers some a way out.

"The biggest thing for us is to keep the youngsters occupied. It takes them away from all the ills from our neighbourhoods," said Raeed Gallant, 35, co-director of Playaz Inc.

Siraaj Allen, 30, said music kept him from taking a more dangerous path, when as a teenager he started hanging around with "the wrong guys".

"I chose music. And that saved me from being a bad person," he said. 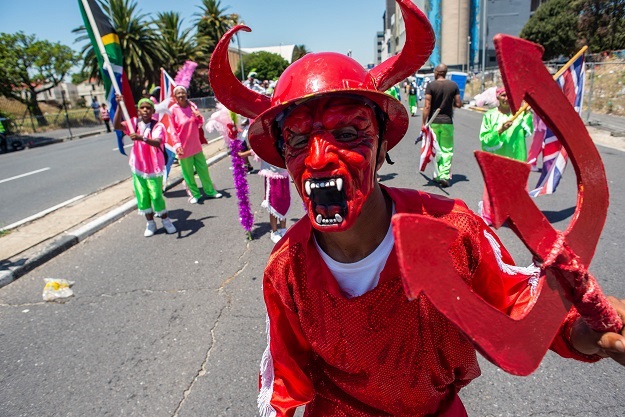 "Music taught me discipline and now I give it over to the younger guys, to make sure they don't go the same path that I almost went."

With 27 troupes confirmed, organisers said the parade would be back with a bang after the two-year hiatus.

"There was something missing during Covid-19, if you understand the cultural significance of this event," deputy mayor Eddie Andrews said, dressed in a bright white and yellow costume.

"It's very important for us, this event is part of Cape Town," he added, outside city hall as the parade was about to kick off.