Pupils and staff at Phomolong Secondary School are grieving for widely loved and respected deputy principal Thembisile Ngendane, who was gunned down outside the school on Friday.

"This school is nothing without ma'am Ngendane," said pupil Yonele Mzilikazi, as she clung to her fellow matriculants still reeling from Ngendane's execution-style murder.

"She was a very loving person who used to encourage us to do better. This school is nothing without ma'am Ngendane. She was the best teacher in this school. There is no teacher that can replace her. We want justice for our 'popayi' [cartoon]. She used to call us popayis, and today we are ma'am Ngendane's popayis forever," she said.

According to initial reports, the mother of two was driving out of the school gates after work, and three gunmen appeared and shot her three times through the passenger window.

"Subsequently, she got out of her car trying to evade the hailstorm of bullets, but she fell just beside the car. One of the gunmen allegedly shot her twice while she was on the ground, and they fled the scene without taking anything from her," said the Gauteng Department of Education. Pupils at Phomolong Secondary School are calling for justice after their deputy principal was gunned down outside the school.
News24 Kayleen Morgan

On Monday, Education MEC Panyaza Lesufi visited the school where pupils staged a protest and a candlelight vigil, calling for Ngendane's killers to be brought to book.

As News24 left the premises, kitchen staff waved us down, wanting to share their memories about the woman who touched their lives. A memorial for the teacher.
News24 Kayleen Morgan

"She was a woman who treated us well. We are grief-stricken. She was our confidant and knew our troubles. Whenever we had problems, we would turn to ma'am Ngendane. Today we have no one to turn to. We have felt great pain. We want justice and for the killer to be brought to light," said Tholakele Mtumtum, who works in the school's kitchen. 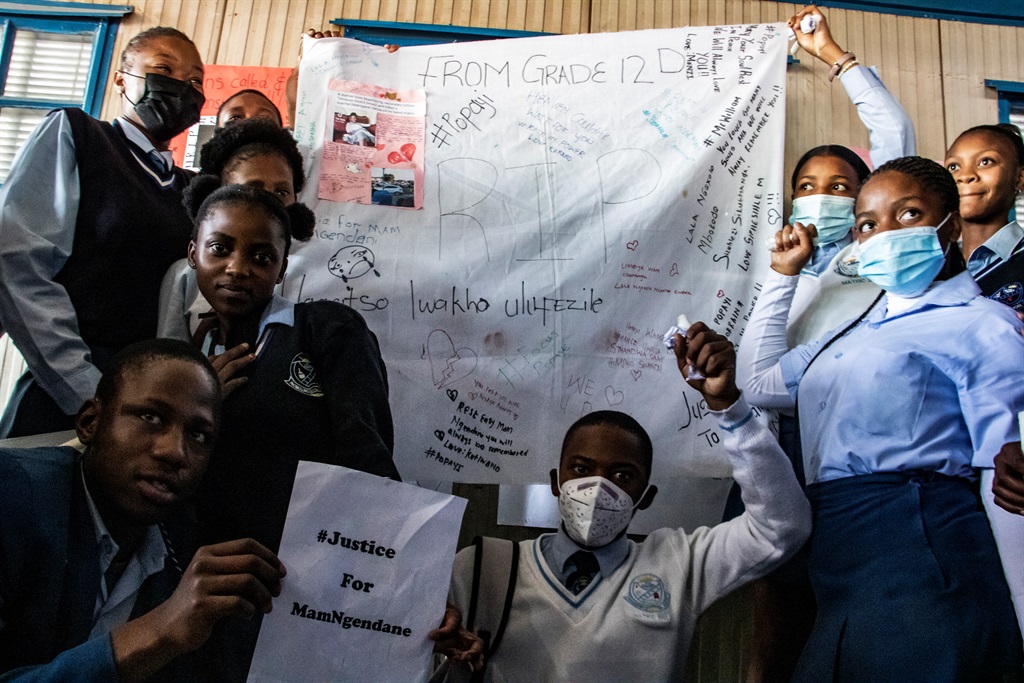 Pupils at Phomolong Secondary School are calling for justice after their deputy principal was gunned down outside the school.
News24 Kayleen Morgan

After visiting the school, Lesufi made his way to the Ngendane family home in Birchleigh North, in Ekurhuleni. Family spokesperson Yolo Ngendane said they were shocked by the incident because Ngendane was loved by many.

"We don't know why this happened because we know her as someone who didn't have any problems with anyone. She has never said she had issues with anyone, so this whole thing has left us feeling shocked," said Yolo.

Lesufi warned the public against speculating about the reason behind the murder.

"We have no information, and we must wait for the police to conclude their work, and we must ensure that those who killed our deputy principal are the ones who tell us why they did this. I want to send a strong message to them as well: they can run, but they can't hide," he said.

Lesufi said that a provincial task team had been assembled to track down the killers and that they had activated their 72-hour plan.