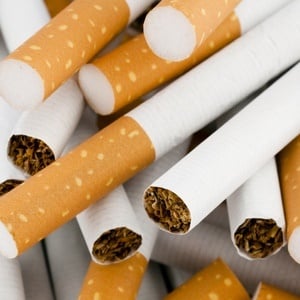 A 43-year old man was arrested in Madikwe, North West, on Saturday for the alleged possession of illicit cigarettes, with an estimated value of almost R1.2m.

This, after police acted on a tip-off that two vehicles were escorting a truck which was suspected to have been hijacked.

The truck was spotted on a gravel road leading to Moubana.

Police spokesperson Colonel Adéle Myburgh said backup was summoned after police realised there were four other vehicles escorting the truck.

"It is alleged that upon recognising the presence of the police, the escorting vehicles fled the scene and left the truck behind.

Consequently, the truck was stopped. Although five male occupants managed to run and fled into the bushes, the driver of the truck was arrested," Myburgh said.

Boxes of allegedly illicit cigarettes were found, with an estimated value of R1 166 000.

#sapsNW Police in Madikwe, acting on a tip-off, arrested a 43-year-old suspect on Saturday, 31 August 2019 in Moubana village outside Madikwe for possession of illicit cigarettes worth an estimated R1 166 000-00. NPhttps://t.co/QnwoV1ycPe pic.twitter.com/DE9W6UFrx7

The man faces a charge of possession of illicit cigarettes (Export Control Act under the Customs and Excise Act 91 of 1964). He is expected to appear in court soon.

He said the bust would send a clear message that illicit activities would not be tolerated.

We live in a world where facts and fiction get blurred
In times of uncertainty you need journalism you can trust. For only R75 per month, you have access to a world of in-depth analyses, investigative journalism, top opinions and a range of features. Journalism strengthens democracy. Invest in the future today.
Subscribe to News24
Related Links
SARS extends deadline for tender to help stop illicit tobacco trade
SARS fight against illicit cigarette trade backed by industry players
Tobacco companies to SARS: help us help you by tackling illegal smokes
Next on News24
LIVE | Covid-19 in SA: Cases hit 790 004, as death toll rises to 21 535