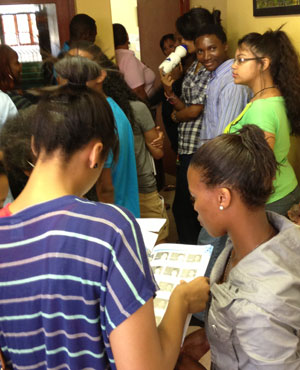 The 2016 matric pass rate, including the results of the progressed pupils, increased to 72.5%, which was 1.8 percentage points more than last year’s rate of 70.7%.

Get your matric results on News24

Progressed pupils are those who fail Grade 11 for two consecutive years and are then automatically promoted to matric.

Motshekga said attention had been given to providing academic support for these pupils during the year.

“As a result in 2016 we saw the largest number of progressed learners since the promulgation of the policy. Failing learners does not help them. We need to instead support them in areas of weakness.”

Of the progressed pupils, over 3 000 got bachelor’s degree passes.

“The significance of this achievement is that these learners would be high school dropouts if they had not been supported,” she said.

We live in a world where facts and fiction get blurred
In times of uncertainty you need journalism you can trust. For only R75 per month, you have access to a world of in-depth analyses, investigative journalism, top opinions and a range of features. Journalism strengthens democracy. Invest in the future today.
Subscribe to News24
Related Links
Matric pass rate up slightly, despite 'progressed pupils'
Shift focus from matric results to primary schooling - Equal Education
Education dept stands by 2016 matric results
Next on News24
LIVE | Covid-19 in SA: 53 new deaths as cases hit 2 920 109

Lucky Sunday for 3 Daily Lotto players
Full list of lottery results
Lockdown For
DAYS
HRS
MINS
Voting Booth
Should Proteas star Quinton de Kock continue playing at the T20 World Cup even if he doesn't take the knee in support of the fight against racism?
Please select an option Oops! Something went wrong, please try again later.
Yes! He should be allowed to show his support any way he chooses
38% - 824 votes
No! If De Kock refuses to unite with his teammates, then he should be on the next plane home
12% - 262 votes
The only ones at fault here are Cricket SA, who have sabotaged another Proteas World Cup
51% - 1109 votes
Previous Results
Podcasts
PODCAST | Ballot Box: An end to 'vat en sit' coalitions and how they will be regulated in the future