South Africa is not committing to cutting ties with Israel.

This according to International Relations and Cooperation Minister Naledi Pandor.

Responding to a parliamentary question, she reiterated the government's stance on the matter.

"South Africa has recently issued a number of media statements strongly condemning the actions of the Israeli government, where casualties have been mostly innocent civilians, children, women and the elderly. Palestinian gather near the rubble of an ice factory and mechanic garages that were destroyed by Israeli airstrikes, in Gaza City.
Sameh Rahmi/NurPhoto via Getty Images

"South Africa recalled its ambassador accredited to the State of Israel, Mr Sisa Ngombane, in May 2018. The government remains seized with the modalities related to its diplomatic relations with the State of Israel. The department will communicate any further actions still under consideration," Pandor said.

This in response to a question from EFF MP Thembi Portia Msane who wanted details on South Africa's "response to the criminal and indiscriminate killing of Palestinians by the State of Israel".

After nearly two weeks of violence in the Gaza Strip, a ceasefire between Israel and Hamas was announced.

Al Jazeera reported it came into force after Egypt brokered an agreement between the two parties. 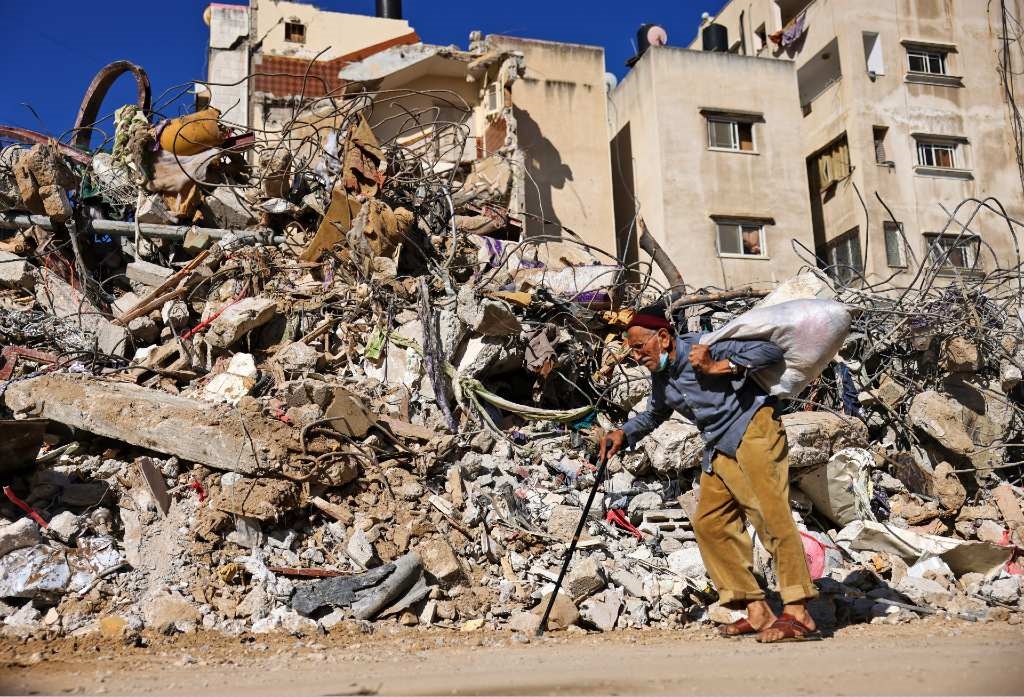 A Palestinian man walks past a building destroyed by Israeli bombardment in Gaza City, on 19 May 2021.
Mohammed Abed/AFP

The 11-day conflict claimed the lives of at least 232 Palestinians, including 65 children. Twelve Israelis, including two children, were killed.

According to the UN, at least 90 000 people have been displaced in Gaza.

The SA Jewish Board of Deputies' national director, Wendy Kahn, said if South Africa truly wanted a resolution to the Palestinian-Israeli conflict and wanted to play a part, it should be looking to increase its presence in both countries. Palestinian Muslim men perform the morning Eid Al-Fitr prayer outdoors amid the destruction on the first day of the Muslim holiday.
Majdi Fathi/NurPhoto via Getty Images

"It also negates their ability to play a role as any kind of peace broker. This is so incongruent to the way in which they approach all other conflicts globally and on our continent," she said.

In respect of South Africa's mission in Israel, Khan added: "During the Covid-19 pandemic in particular, they provided incredible support to South Africans in Israel as well as assisting with repatriation processes.

"It would be extremely important for the South African mission to remain functioning. There are many South Africans in Israel for various reasons - trade, tourism, religious and personal. As South Africans they are entitled to diplomatic assistance when required.

"Furthermore, South Africa has a role to play in encouraging peace building. They should be bringing the parties together in dialogue. This is not possible without a diplomatic presence in the country."

Perfect start to the month for 1 Daily Lotto player!
Full list of lottery results
Lockdown For
DAYS
HRS
MINS
Voting Booth
Should pension fund members be allowed to access their savings before retirement?
Please select an option Oops! Something went wrong, please try again later.
Yes, it's their money to do with as they please.
34% - 1790 votes
No, more people will end up without enough savings in retirement.
37% - 1920 votes
Depends on how big the withdrawal limits will be.
29% - 1485 votes
Previous Results
Podcasts
PODCAST | The Story: Surviving Covid-19 and unrest: - will our economy ever recover?