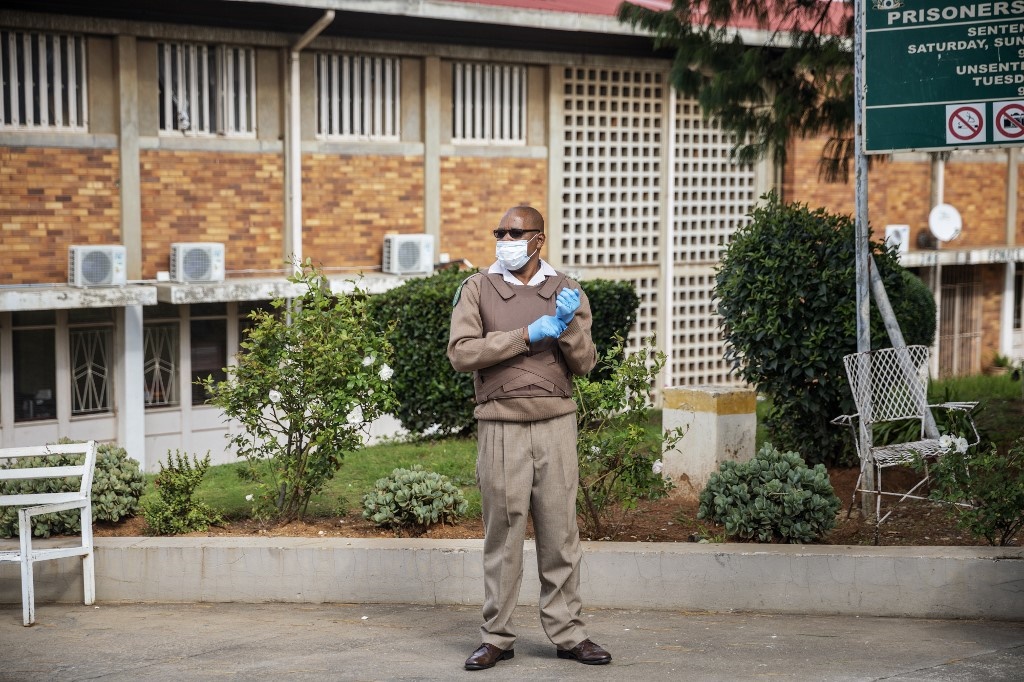 A prison guard wearing gloves and a face mask stands guard at the entrance of the female section of the Johannesburg Correctional Centre also known as Sun City Prison. (Michele Spatari / AFP)

The result came back from the prison official's coronavirus test: Positive.

But it was already too late. The virus had already invaded her workplace, and was cutting a swathe through prisoners and staff alike.

Over the past two weeks, 56 inmates and 31 workers at the correctional facility in East London have been diagnosed with the potentially deadly disease.

"This is a ticking time bomb," said Ayanda Botha, whose nephew is serving a 10-year term at the overcrowded jail in the Eastern Cape.

"There is no physical distances in prisons, none at all," he told AFP. "So how do you expect to contain the spread?"

The tale encapsulates the problem facing the world's jails, where close confinement is a red-carpet invitation to a respiratory virus.

Overcrowding and poor sanitation have prompted a growing number of countries to release low-risk prisoners after coronavirus was detected among inmates.

Its 242 jails house around 160 000 inmates, according to official figures, although data on overcrowding is not available.

So far, only four prisons say they have detected the disease, prompting government to opt for prevention rather than release.

Some of the East London cases - which has more than 300 inmates and employs some 80 staff - will be treated in hospital.

Justice Minister Ronald Lamola assured that all infected prisoners had been put in single cells on a separate quarantine site. "We have absolute confidence in our Covid-19 measures and we are confident that they will lead to recoveries that will 'give birth' to a correctional services free of the virus," Lamola told reporters earlier this week.

Family visits have also been restricted and testing ramped up in all detention centres.

"Even with the testing, I am not convinced that the net will catch each and every prisoner," said Botha, who remained worried.

Coronavirus outbreaks in detention centres are often traced back to prison officials who contracted the disease outside office hours.

The first case at the East London facility was a staff member who fell ill after attending a funeral in Port Elizabeth.

South Africa's correctional services department said it was considering how best to deal with "officials attending gatherings and movements from their residences to places of work".

Two suspected coronavirus cases were meanwhile reported by the St Albans correctional centre, on the outskirts of Port Elizabeth in the Eastern Cape.

Testing on Friday revealed that all inmates were negative.

But a prisons social counsellor told AFP that  inmates had panicked at prospect of a Covid-19 outbreak.

"They are not taking it lightly, they are afraid," said the counsellor, who did not wish to disclose her name for fear of being reprimanded.

"With the overcrowding, the spread can be very fast," she added. "But prison officials are putting numerous measures in place to curb the unthinkable."

The counsellor confirmed inmates were given gloves and face masks and that "recommended hygiene protocols" had been set up.

Mavuyi Themba's brother was one of the St Albans inmates suspected of carrying the virus.

Despite his concern, Themba told AFP the government's response to the pandemic was "commendable".

"I see the work which is being put in the fight against this disease and I'm hopeful," said Themba.

"It is crowded there," he added.

"But the prison officials try their level best to separate those affected and apply the recommended hygiene protocols."

We live in a world where facts and fiction get blurred
In times of uncertainty you need journalism you can trust. For 14 free days, you can have access to a world of in-depth analyses, investigative journalism, top opinions and a range of features. Journalism strengthens democracy. Invest in the future today. Thereafter you will be billed R75 per month. You can cancel anytime and if you cancel within 14 days you won't be billed.
Subscribe to News24
Related Links
9 more prison officials test positive for coronavirus
6 new coronavirus cases confirmed at East London prison
Coronavirus: 49 more prisoners test positive in East London prison as outbreak worsens
Next on News24
BREAKING NEWS LIVE | New Gauteng premier to be sworn in on Thursday