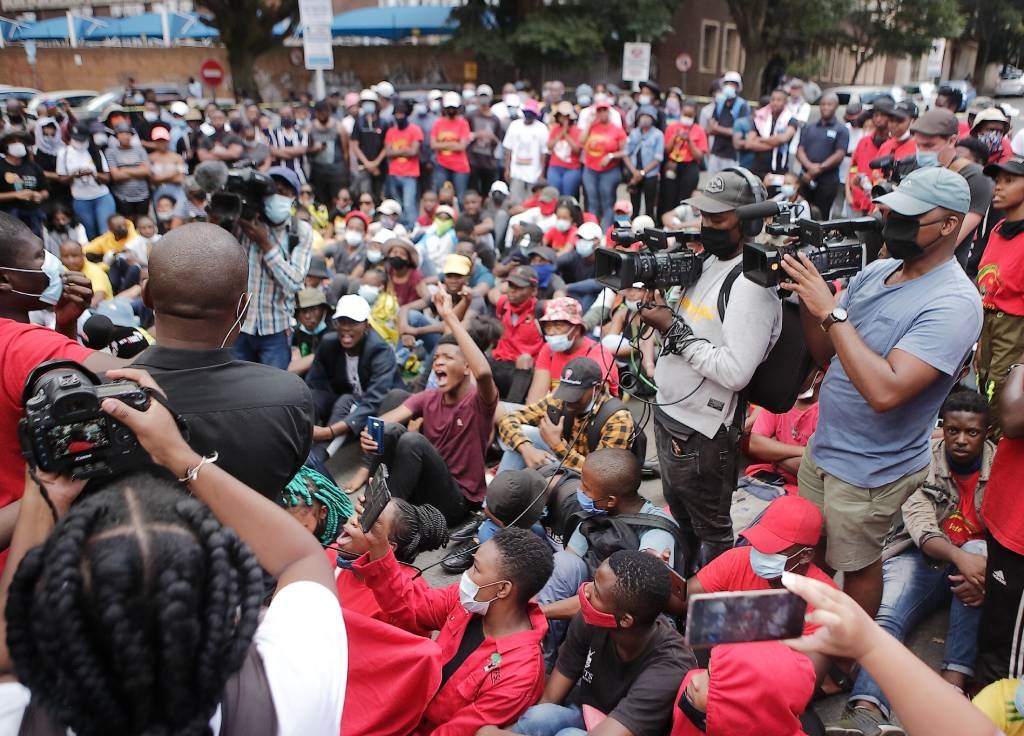 Students protesting at the Wits University. It is reported that the student leaders protested over registration issues.
Fani Mahunts, Gallo Images

"We believe that these acts of intimidation of eNCA journalists by students are rooted in recent tweets by EFF leader Julius Malema encouraging members to not cooperate with journalists from this media house," said Sanef.

Malema had last week tweeted: "No journalists Male/Female from eNCA will interview any of the EFF activists anywhere globally; you can all jump anyhow you want. VOTSEK!!!"

No journalists Male/Female from eNCA will interview any of the EFF activists anywhere globally; you can all jump anyhow you want. VOTSEK!!!

During protests in Johannesburg on Monday, eNCA reporter Sli Masikane was allegedly accosted by the EFF-linked students who pushed and shoved her and her camera crew during a heated verbal exchange while she was reporting on the protest.

"Sanef acknowledges that other student formations intervened and defended Masikane and her camera crew. We also salute the bravery and courage she displayed during the encounter."

Similar incidents have happened to other eNCA journalists during their coverage of EFF events, after the broadcaster decided it would stop covering the EFF's elective conference in 2019 in solidarity with some media houses who the party said were not allowed to cover it.

"We believe that eNCA is now being punished for this decision. But this 'tit-for-tat' campaign is not good for journalism - the question is, which media entity will be the next victim?

"We believe such tactics by any political formation has no place in our democracy as it fuels attacks on journalists. If the EFF has any issues with the broadcaster they, like all other stakeholders, should engage with eNCA."

"The United Nations plan of action on the safety of journalists warned that every attack on a journalist distorts reality by creating a climate of fear and self-censorship, and every journalist neutralised by terror, physically or through cyberbullying, results in one less observer of the human condition."

Sanef said it would continue attempts to reach out to the EFF's leadership to resolve the matter.

Here are the Daily Lotto numbers
Full list of lottery results
Voting Booth
Have you and your family been counted in Census 2022?
Please select an option Oops! Something went wrong, please try again later.
Yes
48% - 1239 votes
No
52% - 1364 votes
Previous Results
Podcasts
PODCAST | The Story: How one incident at Stellenbosch University sheds light on deeper issues