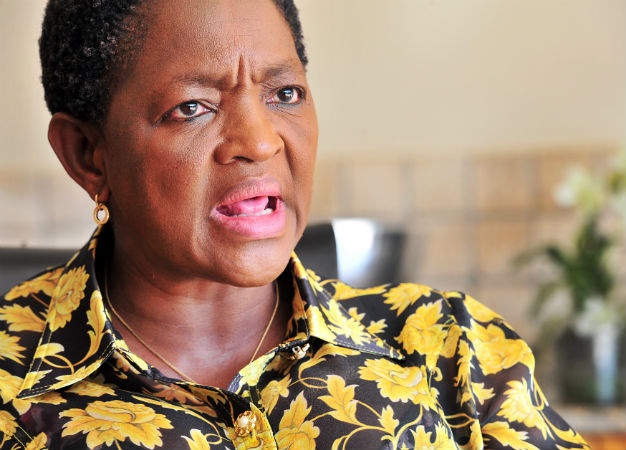 ANC Women's League (ANCWL) president, Bathabile Dlamini, singled out Hunter in a series of tweets on Friday, in response to an article the journalist had written regarding an ANCWL meeting on Thursday night.

The meeting debated whether it should march in support of ANC secretary-general Ace Magashule.

Dlamini accused Hunter of lying, saying she was being paid to divide the ANC.

Again this journalist paid to write propaganda is lying about the meeting of the WL .The approach that she is coming up with is figmentation of her corrupt mind .Each and every member of the WL NWC that attended the NWC knows what was exactly discussed in the NWC .She is a liar

"She is a disgrace and she is an insult to the struggle for women's emancipation .She is the queen of patriachy and she has ametuerish and grovelling journalist [sic]," Dlamini tweeted.

I hate liars ,this women lied about the women’s league at the policy conference,I don’t have time for her it’s worse when a woman is used by men to destroy women .This is about the soul of our birthright ,the future of the country not about a journalistanyana that is used

In a statement, Sanef said: "Taking to Twitter - a social media platform that has become synonymous with the most vitriolic and atrocious attacks against mainly women journalists - the ANCWL president, who has 22 600 followers on Twitter, accused Hunter of deliberately 'spreading lies' and being 'bankrolled' by a 'Master' to 'destroy the ANC'."

Actually the life of the ANC is at stake here and we are going to present our position Hunter is not our spokes person .She is a disgrace and she is an insult to the struggle for women’s emancipation .She is the queen of patriachy and she has ametuerish and grovelling journalist

Her tweets also refer to Hunter as "misogynistic", "an insult to the struggle for women's emancipation", and labelled her as an "information peddler".

I am going to lay a complaint to the press ombudman about her unbecoming behaviour and who ever is paying her to divide the ANC must just stop .This woman has been left for a long time leaking gori details of the ANC meetings and who your master

News24's lawyers have called for an unconditional retraction of the accusations. They have also called for an apology to be published on Twitter and other platforms, due to the defamatory nature of the statements.

https://t.co/trhN0gHW48Qaanitah Hunter must be brought to book for spreading lies.She has been left for too long lying and leaking the information about ANC meeting .Who is her Master .Who is paying her ? To hell with journalists that are bank rolled to destroy the ANC

"They are also highly defamatory of Ms Hunter, who is a senior journalist, whose political and investigative reporting won her many awards, including the Nat Nakasa award for brave and courageous journalism, and the Vodacom Journalist of the Year award in 2016 and 2017," the letter said.

"While you and the ANC Women's League are perfectly entitled to dispute the version of events at the meeting of the League on Thursday 6 May 2021 … you are not entitled to harass, intimidate and defame persons, who express views contrary to your own."

A deadline of 24 hours was given for the public apology, after which further legal action would follow.

"Dlamini's unfortunate tweets are another example of how rogue politicians, here and globally, have weaponised social media to insult, denigrate and ultimately silence the work of critical journalists.

"We shall not succumb or quiver to Dlamini's disgusting behaviour in the name of women empowerment. We will continue to demand an apology and retraction in the right legal forum," Basson added.

The incident comes only a few days after International World Press Freedom Day was celebrated on 5 May.

"Sanef again reminds political and all sector leaders of the consequences of any attempts to intimidate journalists and the dangerous impact it has on media freedom.

"Media freedom is the lifeblood of our democracy and is protected by the Constitution," Sanef said.

Lucky Sunday for 1 Daily Lotto player
Full list of lottery results
Lockdown For
DAYS
HRS
MINS
Voting Booth
When and why would you have your or your partner's sperm count checked?
Please select an option Oops! Something went wrong, please try again later.
That's an unnecessary procedure
17% - 471 votes
As soon as we decide to start a family
7% - 187 votes
Only if we're struggling to conceive
76% - 2086 votes
Previous Results
Podcasts
PODCAST | The Story: Public Protector Busisiwe Mkhwebane's fate hangs in the balance