A porcupine carcass washed up on Melbosstrand Beach in Cape Town in the early hours of Tuesday.

It is unclear how long the dead animal was laying there and what caused its death.

The Cape of Good Hope SPCA said it was investigating the circumstances.

"We were informed of the animal that washed ashore. The porcupine carcass was handed over to the SPCA for a post-mortem, but it is too early to speculate where the porcupine came from or how it ended up on the beach," said SPCA chief inspector Jaco Pieterse.

The inspectorate team said it was important to guard against misinformation and it would issue a statement with its findings once the post-mortem results were ready.

"We want to guard against pointing fingers until we have all the facts and can draw a sound and factual conclusion as to why these wildlife carcasses are washing ashore," the SPCA added.

Resident and avid beachgoer Cornelia Jansen, who found the porcupine carcass, told News24 "it was pretty weird" to see the dead animal laying there.

"It had a little blood on his nose but no other serious injuries from what I could see. It did not give off a bad smell which could possibly indicate the carcass was only laying there for a few minutes before we placed it into a box," she said.

She called her friend, Liezl Neethling, who works closely with the SPCA, to come and have a look at what she saw.

"When Liezl came to the beach, we moved the little carcass into a box and called the SPCA who then collected the animal at Liezl's house. It's definitely not the first time that some sort of wildlife animal washes up on this beach but I was shocked to see a porcupine of all animals wash up," Jansen said. 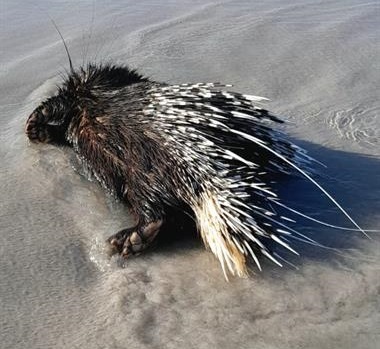 Last Friday, a female adult aardvark washed up on Sunset Beach in Milnerton.

It most likely died of suffocation or heart attack.

"An autopsy was conducted which determined that the results indicate that the animal was already dead by the time it went into the water.

"[Even though the] animal was already deceased, [it was] in remarkably good shape when pulled from the surf zone by members of the public and left on the beach where it was collected," Pieterse previously said.

Before that, a trapped Cape fur seal had to be euthanised after it was attacked and stoned by four men at Monwabisi Beach in Khayelitsha, Cape Town.

They were each released on R1 000 bail, much to the SPCA's "disappointment".