Senzo Meyiwa murder: The 5 accused and the charges they face Five men appeared in the Boksburg Magistrate’s Court in connection with the Senzo Meyiwa murder on Tuesday.
Chanté Schatz, News24

Proceedings in the Boksburg Magistrate's Court was an event to be beheld on Tuesday morning as five men appeared for their alleged involvement in the murder of former Bafana Bafana goalkeeper Senzo Meyiwa.

With limited space in the courtroom, reporters as well AfriForum's private prosecution unit had to find ways to sit through the proceedings, while also maintaining physical distance to curb the spread of Covid-19. 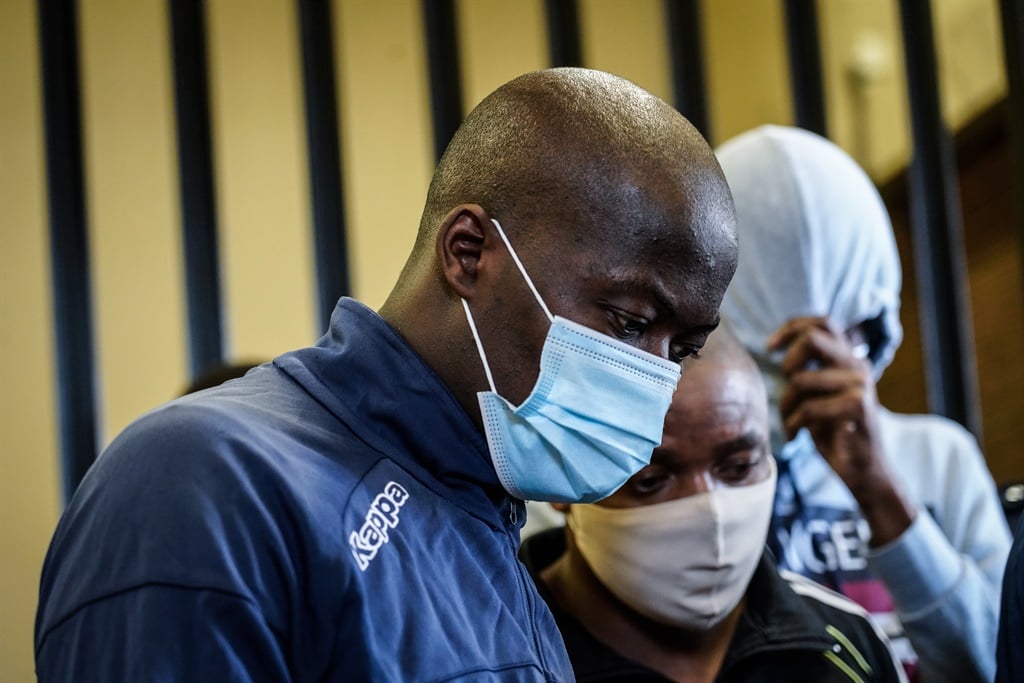 But a sudden turn of events caught the court by surprise when four of them - Sibiya, Mncube, Maphisa and Ntuli - appeared without any legal representation and contended they had no need of one because they were wrongly implicated. The accused said they were being implicated because "they did not have money", while those "with money" were out on the loose.

They also alleged it was not true they were arrested on Monday and that they had been in custody.

Police Minister Bheki Cele announced the five men were arrested between 08:00 and 10:00 on Monday.

According to the indictment all the accused are South African citizens.

Sibiya, 34, and Ntanzi are respectively from Tembisa in Gauteng and Rustenburg in the North West, while their co-accused - Mncube, 36, Maphisa, 35, Ntuli, 34 - are from KwaZulu-Natal. The court heard the accused were facing a schedule six offence.

According to the indictment, the accused face a charge in that they allegedly unlawfully and intentionally killed 30-year-old Meyiwa on 26 October 2014 in Vosloorus and they attempted to kill Kelly Khumalo's sister, Zandile Lorraine, whom they allegedly shot.

At the time of the incident, Meyiwa was also in the presence of Khumalo's mother, Gladness, Longwe Thwala, who was Zandile's boyfriend, Meyiwa's friend, Tumelo Madlala, as well as Mthokozisi Thwala.

Music mogul and businessman Chicco Twala and his son, Longwe Twala, say they would like to meet with Senzo Meyiwa's mother. | @ntwaagae https://t.co/l7Ckf3w6fa

The indictment also states that count three is for the assault of Khumalo whose cellphone, a Samsung S4, was taken from her at gunpoint.

Count four and five are for the possession and use of a firearm, a 9mm parabellum C7 model 75 pistol whose serial number was filed off, without a licence.

The summary of substantial facts reads that while Meyiwa was at Khumalo's home on the day, two people barged in at around 20:00 with a firearm and a knife and demanded money and cellphones from the victims.

"We have nothing to do with the case." This was what four of the five people accused of the murder of former Bafana Bafana goalkeeper #SenzoMeyiwa told a Johannesburg court on Tuesday. | @Sesona_Ngqaks https://t.co/wj74I5jWQM

A scuffle ensued between Meyiwa and the person who had the firearm and the footballer was shot in the chest. It is alleged the shooter had dreadlocks, a gold tooth and was wearing a khaki coat. One of the shots fired on the day struck Zandile on her right ankle.

They dropped a hat on the premises while fleeing.

Meyiwa was declared dead on arrival at Botshelong healthcare facility.

The State alleges the accused were acting in common cause.

Addressing the allegations from the accused that they were not arrested on Monday, National Prosecuting Authority (NPA) spokesperson Sipho Ngwema said the reality was that they were all in custody.

ALSO READ | Meyiwa's family hopeful after arrests: 'We have been waiting for this day for 6 years'

He said warrants of arrests were only obtained last week and the police executed them.

"Maybe there's a difference of understanding in terms of the technicalities that are involved because they were in custody, they [thought] they were arrested [sic].

"They were not arrested for this particular matter and so they had to be moved from the prisons where they were because there were warrants that were executed in order for them to be able to appear for this murder case here this morning," Ngwema added.

He said the investigation was tight and there were no possibilities of wrongful arrests, adding they were confident the accused were the right ones at this point while more arrests were not ruled out.

Ngwema added:
We still have a long way to go. When the [DPP] took the decision on Wednesday because there was sufficient evidence to charge these five, there were number of instructions that he had issued so that we can make sure that when we present the final indictment everything [would] have been done and follow up investigations...

Meanwhile, Meyiwa's brother, Sifiso, had only a few words to express himself following court proceedings, saying it was just the beginning.

"When they [the accused] say they don't know anything, obviously when you are arrested for a crime, you deny it. Investigations will continue. But I am happy there have been people arrested. The police bringing them to court mean they have done their investigation and I don't think they would have brought them in without any evidence."

READ | 'I will be satisfied when the mastermind is arrested,' says Senzo Meyiwa's brother as Afriforum insists it was a hit

He thanked the scores of supporters who had come out to court, calling for the accused to remain in jail.

The five men will remain in custody at various prisons and police custody.

They will appear again in the Boksburg Magistrate's Court on 27 November to allow for the State to submit a final submission for the case to be moved to the Gauteng High Court in Johannesburg.

* Please note: police and court officials faces have been distorted as per the court's instruction.

We live in a world where facts and fiction get blurred
In times of uncertainty you need journalism you can trust. For only R75 per month, you have access to a world of in-depth analyses, investigative journalism, top opinions and a range of features. Journalism strengthens democracy. Invest in the future today.
Subscribe to News24
Related Links
Senzo's murder 'might have been bigger than has been understood' - Cele after visiting family
'My wish is to meet with Senzo's family' - 'vindicated' Chicco Twala after arrests
Senzo Meyiwa murder: Bheki Cele says there's 'much more to come'
Next on News24
LIVE | Covid-19 in SA: Cases hit 790 004, as death toll rises to 21 535