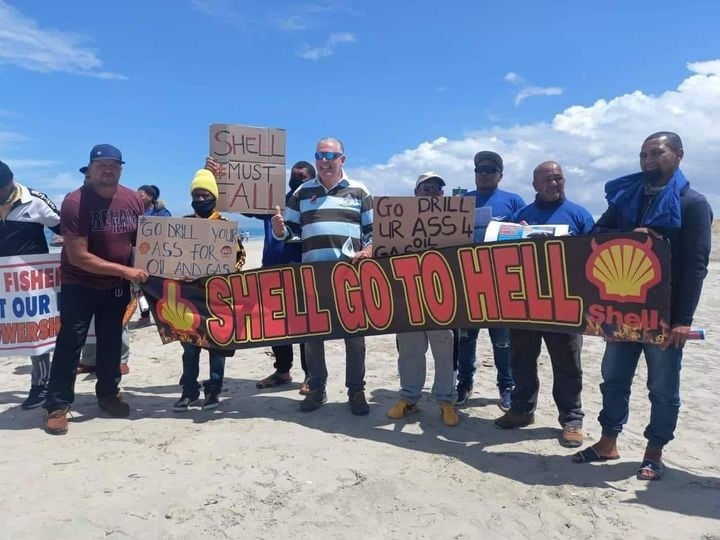 Hundreds of South Africans took to beaches across the country to protest against Shell's seismic survey.
Supplied

The countrywide protests aimed at stopping energy giants Shell from blasting the ocean floor off South Africa's ecologically sensitive East Coast in search of oil and gas have spread to the UK.

A group of 100 Africans in the UK converged outside the South African High Commission in Trafalgar Square on Sunday to fight what they called "the harsh punishment of Africans".

In South Africa, protesters took to various shorelines, including Hout Bay and Muizenberg Cape Town, Eastern Cape's Nahoon Beach in East London, and Mbizana's Mzamba Beach in the former Transkei to object to Shell's seismic survey on the Wild Coast.

By Sunday, an online petition against the survey had collected 396 000 signatures while two groups had launched urgent High Court interdicts to block Shell.

However, one application has gone unsuccessful while the High Court in Makhanda still needs to decide on the latest one launched late last week.

In the UK, the hashtag #stoppunishingafrica demonstration was organised to oppose Shell's seismic survey as well as to reject perceived vaccine apartheid and international travel bans imposed on most African countries in light of the Covid-19 Omicron variant.

The organisers of the UK protest said Shell's seismic exploration in the marine protected areas would result in a complete marine ecosystem collapse which would have disastrous effects on marine biodiversity and local indigenous communities, their livelihoods and tourism for the region.

The protesters said:
We demand Shell halts operations immediately, failing to do so will result in a citizen’s legal action that we are preparing to file in the UK and European courts to stop Shell. We are also aware that there are plans to split Shell into two companies and rebrand the oil and gas exploration so that Shell can continue to destroy the Earth whilst greenwashing the British public into believing that they are investing in green energy.

The organisers of the UK protest are Africans Hayley Reichert, Paris Oomadath and Kate Swart.

Hayley and Paris were born in KwaZulu-Natal and Kate in Pembrokeshire, Wales, but spent most of her life living in the Xhosa villages of the Wild Coast.

The outrage comes after Shell announced it will begin blasting the seafloor of the unspoilt Wild Coast - from Morgans Bay outside East London all the way to Port St Johns - in search of gas and oil deposits.

It appointed Shearwater GeoServices to conduct a three-dimensional (3D) offshore seismic survey from Morgans Bay to Port St Johns to map potential oil and gas deposits under the seabed.

Shell Exploration and Production South Africa said it anticipated the seismic survey would take four to five months to complete, depending on weather and current conditions.

The survey area is more than 20km from the coast at its closest point, with water depths ranging from 700 to 3 000m, and it covers 6 011 square kilometres.

Fish and other marine creatures, including endangered species, may die when Shearwater GeoServices uses a high-powered airgun to blast the sea floor every 10 seconds.

The sound waves can reportedly penetrate more than 1 000m into the earth.

Environmental, ordinary people and businesses have raised concerns that the blasts will affect sea life - including whales, dolphins, sharks, penguins, and crabs.