Student romance leads to two PhDs in one day 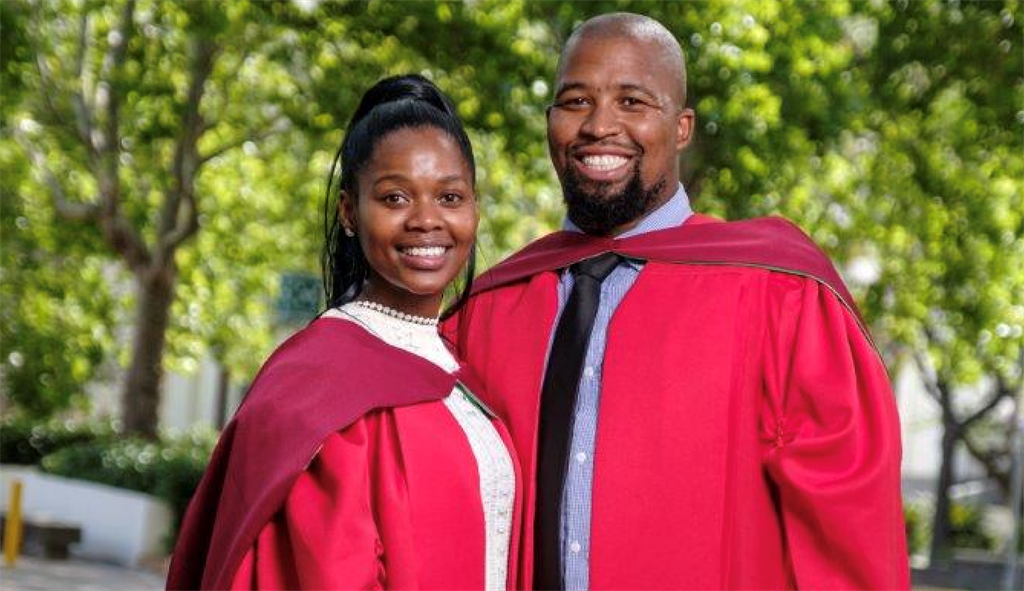 There was jubilation all round in the Shange-Juba household when Nompumelelo Shange and Roderick Juba received their PhD degrees together on the very same day – and both in the Faculty of AgriSciences at Stellenbosch University.

Shange received her degree in Food Science and Juba in Conservation Ecology. The couple were married in September 2019 during a traditional wedding in Inanda near Durban.

"Because of Covid, we had to postpone our white wedding to next year," Shange said.

The two hail from Inanda and Humansdorp respectively. They were second years, living in the Erica and Helderberg residences, when their paths crossed in 2010 through mutual friends.

After years of "just being friends", they started dating in 2016 when at long last both realised they not only shared the same sense of humour, aspirations and work ethic, but were in fact soulmates and best friends.

For the past year or two, they successfully navigated the intricacies of a long-distance romance caused by their shared career aspirations. While Shange was based in Stellenbosch and Oudtshoorn, Juba studied part-time towards his PhD while working for Living Lands, an NGO involved in the holistic management of important catchment areas.

"I've learnt about persistence, perseverance and hard work from him," Shange said.

"And I've learnt that she'll do anything to get things done, and that hard work is part of that," Juba said.

Taking the world by storm - together

They are planning to take the world by storm together and to pay their good fortune of a good education forward by motivating and helping others to do the same.

For her PhD in Food Science, Shange investigated to what degree two emerging pathogens – Campylobacter and Arcobacter – are found in the ostrich meat industry. These pathogens can cause gastrointestinal infections in humans.

"Regulations that govern the contamination of any meat products with these species are not yet in place in South Africa, but my work could serve as a good baseline should government want to put guidelines in place," she said.

Juba focused on the impact of invasive alien trees on riparian zones and the potential value that could be derived from harvesting its biomass.

Among others, he looked at the monetary value attached to producing value-added wood products made from invasive trees being chopped down.

"Bioproducts made from invasive plants, such as biochar and wood chips, can be used to varying degrees of success by wheat and canola farmers to improve soil quality," he noted.

2 people bag R250k in the Daily Lotto jackpot!
Full list of lottery results
Lockdown For
DAYS
HRS
MINS
Voting Booth
When a Covid-19 vaccine for under 16's becomes available, will you be taking your children to get it?
Please select an option Oops! Something went wrong, please try again later.
Yes, immediately!
38% - 3223 votes
I'll wait to see how others respond
26% - 2218 votes
No, I don't think they need it
36% - 3107 votes
Previous Results
Podcasts
PODCAST | MISSING MATTHEW EPISODE 3: Decades of false starts add to a family's despair