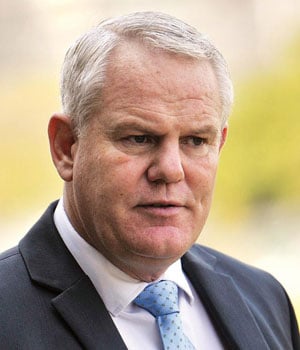 Former head of the Hawks in KwaZulu-Natal, Johan Booysen. (File)

The Sunday Times has apologised and announced that it will return all awards and prize money received for now discredited reports on the Cato Manor "death squad", the SARS "rogue unit" and Zimbabwean extraditions.

"I believe it is only just and fitting for us to humbly reconsider our decision to accept such prestigious awards," the newspaper's editor, Bongani Siqoko, said in a piece published on Sunday.

"Accepting such accolades will be a negation of a higher journalistic idea.

"It will be for this reason that we will be returning all the awards and the prize money."

Siqoko said that the newspaper had spent time reflecting on the reports in question, which had been published in 2011.

"There was clearly a parallel political project aimed at undermining our democratic values and destroying state institutions and removing individuals who were seen as obstacles to this project," he said.

"We admit that our stories may have been used for this purpose," Siqoko added.

We 'allowed ourselves to be manipulated'

Siqoko said that while the purpose of investigating the stories was always to find out the truth, "something went wrong in the process of gathering the information and reporting".

"What is clear is that we committed mistakes and allowed ourselves to be manipulated by those with ulterior motives."

He said that the paper had not been aware of these political machinations – "but we should have joined the dots. We should have paused and asked more questions".

He said that the paper felt it had "failed SA" in this regard and thus was "deeply" regretful.

Nevertheless, he said that the paper also should not have ignored the stories either. "There was, and is, a middle path that we should have taken."

"We should have reported on these incidents but with caution and care, aware of the hidden hand… at play".

In terms of the reports about a Cato Manor policing unit, Siqoko said that the labelling of it as a 'death squad' was unqualified.

Siqoko also said the articles created an "impression" that then-head of the Hawks in KwaZulu-Natal, Johan Booysen, was "directly and personally responsible" for the killings.

Siqoko said that Booysen had told the newspaper he did not have any direct involvement in the unit – and "we have no reason not to accept his version".

On Sunday, the newspaper also published a piece by Booysen in which he outlined how, at the time, he had become aware that "rogue elements within crime intelligence" were meeting with investigative journalists from the Sunday Times.

Booysen said that he had contacted then-editor Ray Hartley and demanded to be given a chance to give his side.

During a meeting, he then explained that many of the allegations were untrue and directed the journalists to channels where further verification could be obtained.

However, the published article presented only the version provided by the other side and made it clear that no further fact checking had been done.

Booysen pointed out how even certain photographs accompanying the story were from unrelated incidents.

He said as some of the newspaper's investigative journalists continued to be used by various forces, "the fallout from these invented stories was that dedicated officials within the Hawks and SARS were ostracised, suspended and worked out of the system".

"High level investigations were compromised as detectives and SARS officials were arrested on bogus charges."

Ultimately, said Booysen, "the aftermath of these articles cannot be measured in monetary terms".

"The Hawks and SARS became dysfunctional and lives were ruined."

Yet, Booysen also extended gratitude to Siqoko, "who has shown great courage and leadership to address wrongs that happened under his predecessor's watch".

We live in a world where facts and fiction get blurred
In times of uncertainty you need journalism you can trust. For only R75 per month, you have access to a world of in-depth analyses, investigative journalism, top opinions and a range of features. Journalism strengthens democracy. Invest in the future today.
Subscribe to News24
Related Links
Judge exercises firm judicial grip on Cato Manor 'death squad' case
Hawks meet Sunday Times editor, both mum on nature of visit
Ex-SARS exec to 'rogue unit' journalist: 'My life is destroyed'
Next on News24
LIVE | Covid-19 in SA: Death toll at 21 289, with 778 571 confirmed cases