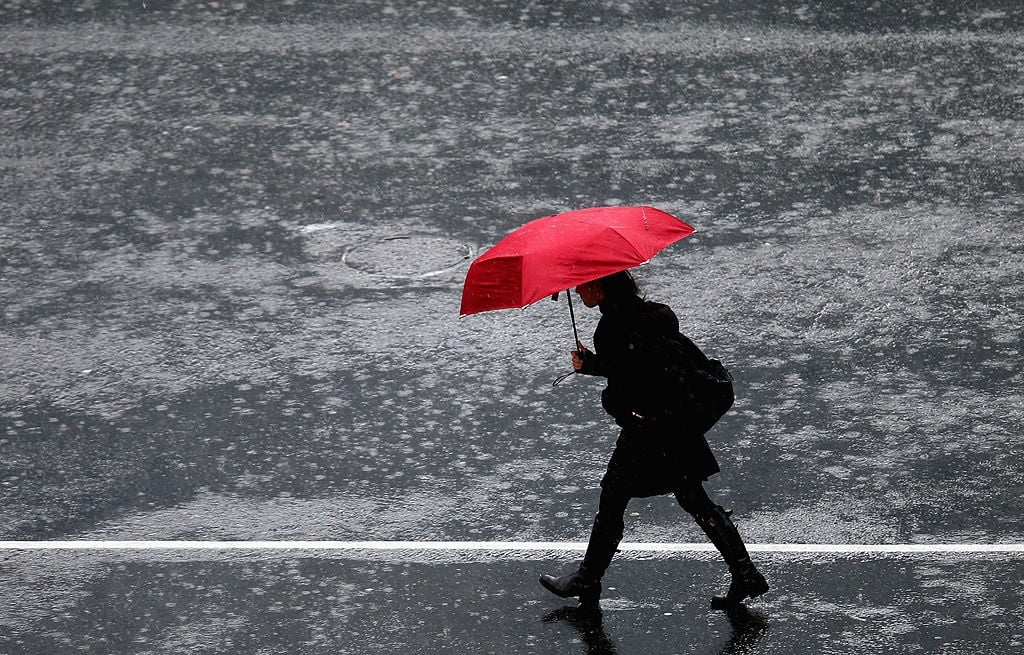 Brace yourself for heavy rains in the Western Cape.
Jason Oxenham/Getty Images

An intense cold front is expected to affect the Western and Northern Cape from late Sunday into Monday, according to the South African Weather service.

Heavy rain leading to flooding is expected over the Cape Metropole, western Cape Winelands and western Overberg in the Western Cape on Monday.

High to very high seas with wave heights between six to 10m is expected between Lambert's Bay and Plettenberg Bay on Monday, subsiding from the west on Tuesday.

Very cold conditions are expected in places over the high-lying areas of the Namakwa District in the Northern Cape until Tuesday and Western Cape and Eastern Cape high ground on Monday and Tuesday.

Strong interior winds (45-55km/h) can be expected over the Namakwa interior of the Northern Cape, Central Karoo and Breede River Valley in the Western Cape Sunday, spreading to the interior of the Eastern Cape on Monday.

Light snowfalls is possible over the western mountains in the Western Cape and southern high ground of the Northern Cape on Monday into Tuesday.

Here is your regional weather update for Sunday:

Gauteng will be fine and cold. The expected UVB sunburn index is low.

The North-West will be very cold at first with severe frost, fine and cold.

It will be fine and cold to very cold in the Free State with severe frost at first.

The Northern Cape will experience frosty areas at first, otherwise fine and cold, but very cold over the southern ground. It will be windy over the interior from afternoon through to the evening. The wind along the coast will be moderate to fresh easterly to north-easterly becoming westerly in the afternoon.

The Western Cape will be frosty in places over the interior at first, otherwise sunny and cool to cold becoming partly cloudy over the extreme west and south western parts from late evening.

It will become windy over the Central Karoo, Breede Valley and Cape Metropole by afternoon. The wind along the coast will be moderate to fresh northerly to north-easterly becoming strong north-westerly in the southwest by afternoon and reaching gale force from late evening.

The western half of the Eastern Cape will be cool along the coast, otherwise fine and cold. Frost can be expected in places over the high lying areas in the morning.

The wind along the coast will be light north-westerly, becoming moderate north-easterly by late morning, but fresh in places in the afternoon.

In the eastern half of the province expect partly cloudy and cool conditions along the coast in the morning, otherwise fine and cold but very cold in places in the north. Frost can be expected in places over the high lying areas in the morning.

The wind along the coast will be moderate north-westerly, becoming fresh north-easterly from late morning, but strong in the evening.

KwaZulu-Natal will be partly cloudy in the east, otherwise fine and cool to cold. The wind along the coast will be moderate to fresh southerly to south-easterly becoming easterly to north-easterly south of Durban by the afternoon.

We live in a world where facts and fiction get blurred
In times of uncertainty you need journalism you can trust. For only R75 per month, you have access to a world of in-depth analyses, investigative journalism, top opinions and a range of features. Journalism strengthens democracy. Invest in the future today.
Subscribe to News24
Related Links
PICS | 'Our houses look like a river': storms cause bad flooding in parts of Cape Town
It's snow joke: SA Weather Service warns of 'bitterly cold, wet and windy' weekend
WATCH | Driver in shock after strong Cape winds cause truck to overturn
Next on News24
LIVE | Covid-19 in SA: 81 new deaths as cases hit 2 918 366