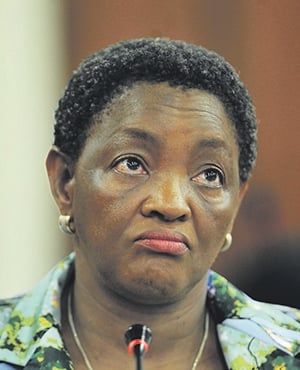 SA Post Office (Sapo) boss Mark Barnes has fired a veiled attack at Social Development Minister Bathabile Dlamini by accusing the SA Social Security Agency (Sassa) of being “non-responsive and causing delays” in his entity’s ability to take over the payment of grants on April 1.

On Thursday, Barnes sent a hard-hitting letter to Mpumi Mpofu, the director-general at the department of planning, monitoring and evaluation, asking her to intervene.

Mpofu reports to Minister in the Presidency Jeff Radebe, who heads the interministerial committee appointed by Cabinet to find solutions to the crisis at Sassa.

“Failure to meet the deadlines will have an adverse reputational impact not only on Sapo, but on Sassa and the government at large,” Barnes wrote.

- Delaying the design of the Sassa card and the specifications of the corporate holding and special disbursement accounts;

- Not cooperating in the finalisation of the biometric engine and integrated grant payment system; and

Following protracted and deadlocked negotiations between Sassa and Sapo in November, the interministerial committee stepped in and ordered the agency to hand over the distribution of grants to Sapo.

But Sassa failed to do so, forcing CPS’s contract to be extended by another year.

In his letter, which was also sent to Sassa acting boss Pearl Bengu, Barnes said that, on November 19, the agency had confirmed specifications for cards and corporate holding and disbursement accounts.

“Despite Sapo’s best efforts to expedite matters to meet very aggressive deadlines, on the 28th of December, Sapo received an email from Ms Mvulane [Sassa’s head of special projects] bringing to our attention that the card design had not been concluded as yet, and requested an urgent meeting to discuss the matter.

"Several meetings have taken place since and, at the time of drafting this letter, the card design has still not been approved by Sassa, which will impact the revised delivery date of March 16 for the first 2 million cards.”

Barnes also complained that, despite Sassa having agreed to Sapo’s proposed biometric and integrated grant payment system model on December 21, on January 22 the agency backtracked and claimed that it had not approved the models.

“On January 22, Sassa’s chief information officer, Mr Mahlangu, indicated via email that Sassa has ‘NOT’ approved the specifications of the two solutions and that, in the event that it was found that the specifications on both solutions do not meet their requirements and if these deficiencies cannot be rectified during the contracting or design phase, Sapo would have to consider withdrawing the request for proposals” from prospective suppliers, Barnes wrote.

Cabinet spokesperson Phumla Williams said it was difficult for her to comment on Barnes’ letter because she had not seen it.

She said the interministerial committee was available to handle all matters relating to the distribution of social grants.

Sassa spokesperson Kgomoco Diseko said the agency was instructed by both the interministerial committee and the standing committee on public accounts (Scopa) on meetings held on November 7 2017 and November 8 2017, respectively, to work with the SA Post Office.

“Based on the directive, it was expected of Sassa to report to the committee on November 16 while, on the other hand, it was scheduled to appear before Scopa on November 17.

"Sassa then immediately considered all the options that will assist, and procurement of the technical and advisory services were considered to be ideal for the Sassa-Sapo engagement to be a success this time around to avoid the impasse that took place earlier in the year when Sassa engaged with Sapo through a closed tender."

RETURN OF THE WORKSTREAMS

In the letter, Barnes also raised concerns about the new workstreams appointed by Sassa, which he believes could be another stumbling block in the process.

“Sapo has been informed that Sassa has appointed new workstream experts who are required to scrutinise every aspect of the solutions that Sapo must deliver on.

“Due to the fact that these experts were not part of the initial discussions and deliberations on the solutions or privy to the principles and processes leading up to the signing of the agreement, the introduction of the requirement that all matters must be cleared by the workstream experts first poses a significant risk to the project.”

The risk will result in deviations from previously agreed solutions and processes, as well as delays in approval processes, said Barnes, adding that deadlines were being compromised.

Dlamini is facing an inquiry that is looking into her role in the appointment of work­streams, and how they almost placed the distribution of social grants in jeopardy.

The workstreams, which duplicated work that was done by Sassa’s officials, reported directly to Dlamini.

Documents received by City Press show that, in December, Sassa handed Rangewave, a workstream, a R11.5m contract without a tender and without obtaining approval from Treasury.

The agency contracted the company to consult as advisers and provide technical services on banking, business information and project management.

The documents show that, on December 11, Sassa asked Treasury to approve a deviation so that Rangewave could be appointed without a public tender process.

However, the agency went on and appointed the company without Treasury’s approval.

On December 21, Sassa informed Treasury that it had deviated from normal procurement processes and appointed Rangewave.

What consequences should Sassa face for seemingly stalling Sapo’s processes?

SMS us on 35697 using the keyword SASSA and tell us what you think. Please include your name and province. SMSes cost R1.50

The story initially misrepresented the response of Kgomoco Diseko when it quoted him as saying: “Sassa spokesperson Kgomoco Diseko said the agency initiated the process to procure Rangewave’s services because they had been instructed by both the interministerial committee and Parliament to work with Sapo.”

In his response, Diseko said that: “Sassa was instructed by both the interministerial committee (IMC) and the standing committee on public accounts (Scopa) on meetings held on November 7 2017 and November 8 2017, respectively, to work with the SA Post Office.”

It was incorrect for City Press to say that Diseko said Sassa procured Rangewave’s services on instruction from the IMC and Scopa for Sassa to work with Sapo. City Press apologises for the mistake and any inconvenience caused by the misrepresentation.

We live in a world where facts and fiction get blurred
In times of uncertainty you need journalism you can trust. For only R75 per month, you have access to a world of in-depth analyses, investigative journalism, top opinions and a range of features. Journalism strengthens democracy. Invest in the future today.
Subscribe to News24
Related Links
I warned Dlamini about her controversial work streams – Magwaza
Dlamini 'was running Sassa like her own shop' - Magwaza
Bathabile Dlamini admits she failed to inform ConCourt promptly about Sassa deadline delay
Next on News24
LIVE | Covid-19 in SA: Cases rise by 2 273