'They said they are going to protect me': Refugee girls have big dreams after losing their families

In a shelter near the border, girls dream of futures that may be out of reach if they cannot secure documents.

In the second of a four-part Al Jazeera series exploring the lives of stateless children in South Africa, three girls share their dreams for the future.

Precious*, 12: 'They said if you come to South Africa there is a shelter where other kids live'

Twelve-year-old Precious is one of the thousands of migrant and refugee children to have found their way to Musina, the northernmost town of South Africa, just 20km (12.4 miles) from the Beitbridge border crossing with Zimbabwe.

She crossed the border two years ago and is now living at the Christian Women's Ministry (CWM) Children's Project, in an old church nestled between houses on the outskirts of town. Train tracks run parallel to the main road there, and spaza shops - informal convenience stores run from people's homes - line the streets. The buildings on the church property have been converted into a shelter for women and unaccompanied girls. Elsewhere in the town, a similar structure houses unaccompanied boys.

When Precious was six, both of her parents died - she has no idea why or how. For several years, she lived on the streets of Beitbridge. Like other street children, she heard many stories about the opportunities South Africa could offer.

"They said if you come to South Africa there is a shelter where other kids live, and you can get your bed and get education and clothes for free," she recalls.

She crossed the border alone.

A child walks past small footprints in the cement at the children's home. (Yeshiel Panchia, Al Jazeera)

Her trip across the Beitbridge border crossing was by malayitsha - a Ndebele term meaning "one who transports goods to and fro". The term is used to describe cross-border transport operators who carry everything and anything - goods, money, undocumented travellers and even unaccompanied children - for a price. The vehicles are often minibus taxis, crammed with goods and people.

The fees for this "service" are higher than for conventional transport, but travellers understand that the extra charge helps facilitate the crossing, with money changing hands between transport operators and border officials.

Precious says an adult, a "big man", on the Zimbabwean side paid her fare - which can be anything from R600 to R2000. She does not know why he paid for her, but she ran away as soon as she could and made the journey to Musina by herself. 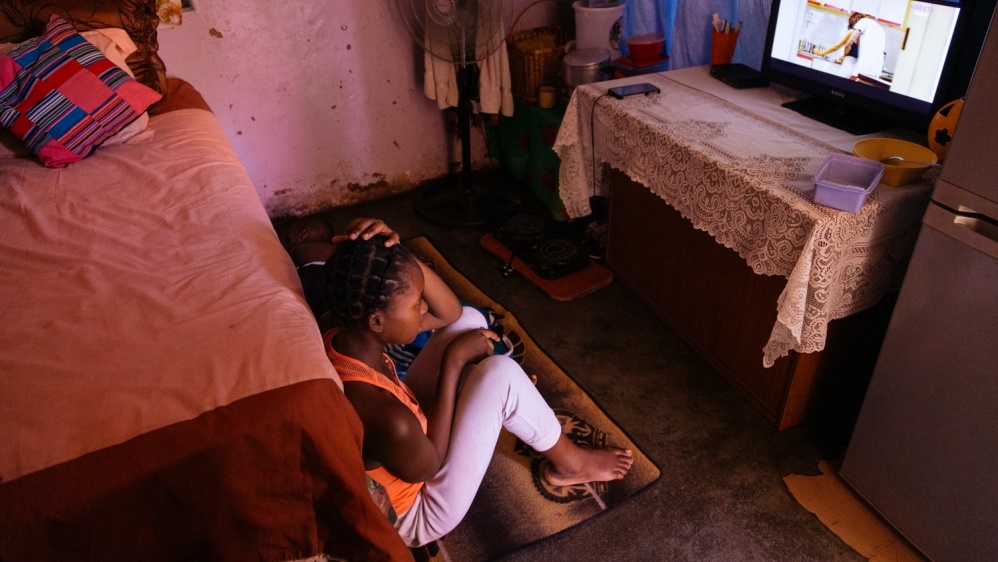 A 17-year-old resident of the children's home, who is originally from Zimbabwe, sits with her one-year-old son, who was born in South Africa. (Yeshiel Panchia, Al Jazeera)

A wooden cross leans against a large tree at the centre of the churchyard where she now lives. The sound of children playing travels through one of the open windows and, from the dining hall, laughter drowns out the sound of the television.

In one of the rooms just off the courtyard, the shelter's youngest resident lies stretched out in front of a fan, fast asleep despite the heat. He is one year old. His 17-year-old mother is originally from Harare, but he was born in South Africa.

Outside, in the shaded church courtyard, the young residents of the shelter huddle for a group photograph. The picture will be mounted in the office, joining all the other photos of children who have lived there since the shelter opened in 2008.

"When I heard I was coming to the shelter I was very happy, because I would get an education"

Sitting on the lower level of a bunk bed in one of the dorm rooms, Precious runs her hand along the graffiti scrawled on the base of the bed above. Here, many young girls have scribbled their messages and their dreams; their prayers and their requests to their gods and their angels. In one corner of the wooden base, a school timetable was written with black marker - English, Maths, Science, Biology. Precious is now in Grade 4 at school, and says she wants to be a teacher.

"When I heard I was coming to the shelter I was very happy, because I would get an education," she says, before adding that her favourite subject is English.

Many of the shelter's residents hope to one day make their way to a big city. Precious has set her sights on Johannesburg. She imagines things will be better there and that she will finally be able to make a home for herself.

A prayer written on the back of a bedroom door in the children's home. (Yeshiel Panchia, Al Jazeera)

Like Precious, 11-year-old Chantelle, also a resident of the church shelter, dreams of one day becoming a teacher. She sits on a single bed in one of the bedrooms. Behind her, a ragdoll and a fluffy bunny flank an open bible.

Chantelle has been living at the home for the past three months. She asks if her story will be on the television and if it will include her real name and photograph. She wants her photograph to be shown, she explains, because then maybe her mother will see it and come to find her.

Chantelle is originally from Zimbabwe, although she does not know exactly where.

"I came here with my mum," she says, "but she disappeared at the border. She saw the police and ran away."

Chantelle says she has no other family. "I feel bad because I want to see my mother."

The children at the CWM children's shelter in Musina have very few personal belongings, often crossing the border alone, taking with them only what they can carry. (Yeshiel Panchia, Al Jazeera)

After she was separated from her mother, some adults brought her to the shelter.

"They told me we are friends. They said to me they are going to protect me, and I can go to school."

Her face lights up at the mention of school. Back in Zimbabwe, her days were spent helping her mother with chores and she never went to school.

"I want to be protected. I want to go to school. One day I want to be a teacher," she says. She misses her village and friends in Zimbabwe, she says, but she is glad that she has new friends in Musina, and that they serve her favourite food - chicken and rice - at the shelter.

Nombuso*, 18: 'I want to be an international lawyer'

Nombuso, who attends the CWM children's home in Musina, hopes to be able to complete her schooling despite not having a birth certificate. (Yeshiel Panchia, Al Jazeera)

Nombuso has been living in the shelter for the past six years.

She sits under the shade of a red canvas roof as the younger girls run around her.

She came to Musina 11 years ago with her sister, who was 21 at the time. She does not remember exactly how she crossed the border.

"I was seven years old," she says. "I just remember when we were in the car and the police caught us and we went to the police station."

Her brother-in-law paid her bail. "I didn't know what was going on," she recalls.

Nombuso lived with her sister in a small rented home in an informal settlement just outside Musina, but was forced to move after her sister died in 2012 and she could no longer afford to stay there.

At least at the shelter, she says, she could continue her schooling. She is currently in Grade 9 and loves science.

"Going to school is so good. It's the wish of every child, but now it's complicated because they need some documents," she explains.

But Nombuso has no identity documents; she only has a court order placing her in state care.

If she cannot stay in school, she would like to work at the shelter and help other children. But her dream, she explains, is to become an international lawyer.

She smiles as she looks into the courtyard where Chantelle and Precious are playing. "I can stand up for the other children like me. That's what I wish."