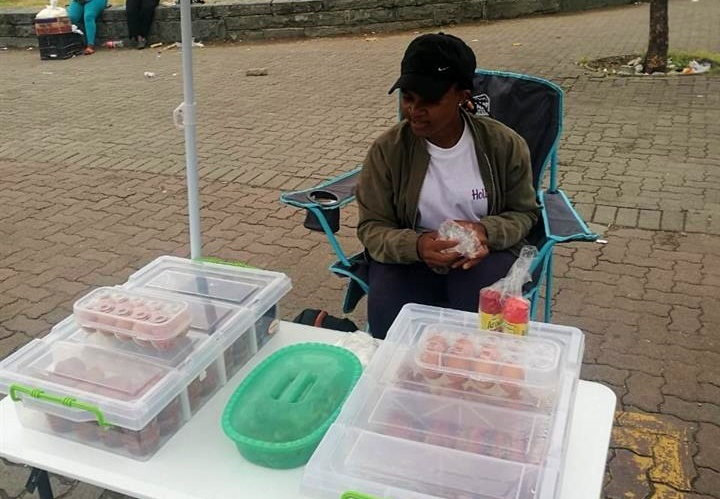 Sinalo Dada dropped out of university to sell bunny chows to support her family.
Supplied

A dedicated student dropped out of the University of Fort Hare's law programme in her third year due to a lack of financial support and has been selling bunny-chows in the streets of Qonce to support her family.

Sinalo Dada, 29, from Tolofiyeni Village, outside Qonce, was the only hope for her family to get out of poverty.

She quit her studies in East London and returned home before the end of 2019, after the National Student Financial Aid Scheme (NSFAS) did not approve her application for a study loan.

Without food, she found it extremely difficult to focus on finishing her four-year Bachelor of Law degree.

Dada can now be found at the busy Market Square, on the corner of Cambridge and Ayliff Streets in Qonce, selling bread quarters filled with fried chips, patties, eggs, lettuce, cheese and polony.

On a good day she makes R800. But after buying stock for her business, she is left with little to keep the lights on at home and buy food for her epileptic father Mxolisi Dada, 63, and part-time domestic worker mother Thobeka Sibango, 52.

Her dreams of becoming a lawyer are on hold until she finds a way to raise R44 374 for tuition and R37 500 to pay for student accommodation.

Speaking to News24, Dada said: "It was really difficult for me in 2019, because I was starving at the student residence. One Sunday, I was too weak to study, so I called one of my lecturers asking for food. He came with his wife and drove me to a local store and bought groceries." Dada said she decided to drop out because she could not continue asking for handouts from peers and lecturers.

The situation back home is not good because my mom works part time cleaning people's houses. She doesn't make enough money. My father is epileptic and unfit to be employed because his condition has affected the functioning of his brain. He is not mentally fit.

Fort Hare has been grappling with a long-standing problem of processing student loan applications on time.

The university conducts preliminary screening of student applications on its campus sites before forwarding them to NSFAS in Cape Town for approval.

"NSFAS and the university are working together to resolve the issue of funding allocation for students, and the case of Ms Dada. At the time of publication of this story on News24, we have not been able to conclude the specific details involving the case of Ms Dada. The university will need to establish what the reasons are for the rejection of the student's funding application by NSFAS," said Roodt. Sinalo Dada dropped out of the University of Fort Hare's law programme due to a lack of financial support.
Supplied Supplied

Dada is the only surviving child of Mxolisi and Thobeka. The couple's second daughter Asenathi died in 2009 after she was struck by lightning while she was in Grade 12 at Mzontsundu High School at Quzini Village, outside Qonce.

NSFAS spokesperson Papama Mpupa promised to respond, but had failed to do so by deadline. Her response will be added once received.

DispatchLive reported on Thursday that NSFAS received incorrect registration templates from the University of Fort Hare this year, which contributed to the chaos surrounding the disbursements of student funding.