Three men arrested in Thokoza for shooting at crowd 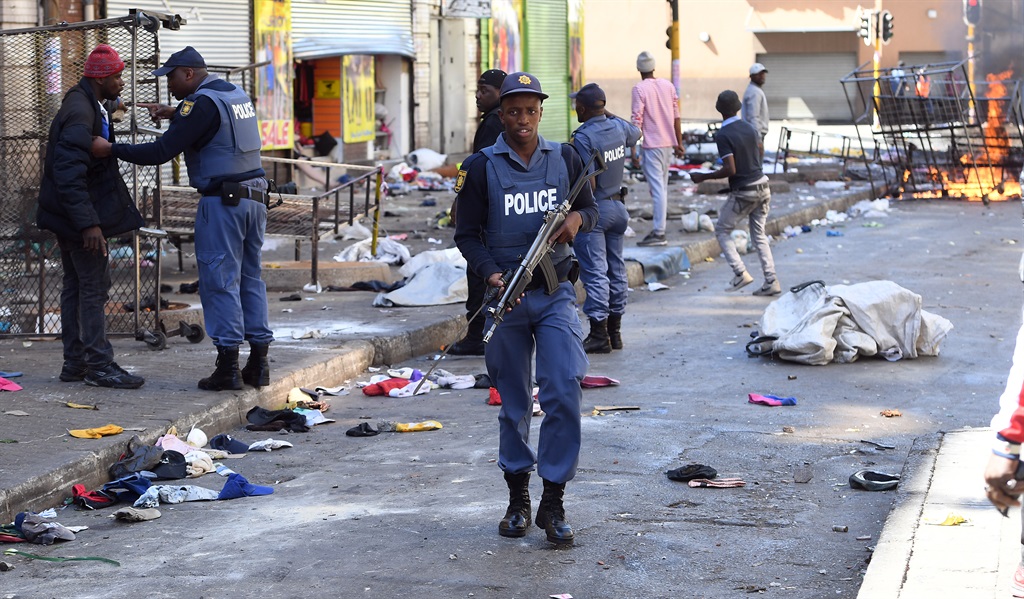 Police patrol parts of Johannesburg which continue to be under siege from looters targeting foreign owned shops. (Felix Dlangamandla, Netwerk24)

Police have arrested three men after they allegedly opened fire on a large crowd of demonstrators in Thokoza, east of Johannesburg, on Wednesday, as the township was gripped by a wave of xenophobic violence.

The three men, aged between 27 and 40, were arrested by members of the police's flying squad unit.

Police spokesperson Captain Vuyisile Mvelase said flying squad members were part of the police contingent deployed in Thokoza to deal with rampant looting of shops in the area.

"They were patrolling the area when they heard gunshots being fired. They then went to the area where the shots were fired and found cartridges on the ground.

"They then received information that people who had allegedly opened fire at a crowd of protesters were driving in two separate white sedans," said Mvelase.

Police managed to track down the two vehicles - a white Nissan Tida and a white Honda Jazz.

"Inside the vehicles, police found two unlicensed firearms with ammunition, and arrested the suspects.

"The suspects told police that they were from Somalia and two of them claimed that they owned a shop in Thokoza. The two men claimed to be siblings, while the third suspect said he was their friend," said Mvelase.

The men are expected to appear in court on charges of possession of unlicensed firearms and ammunition.

It's unclear what the motive was.

Meanwhile, the situation in the township and in nearby Katlehong remained tense in the afternoon as SAPS and metro police battled with groups of looters targeting shops in the area.

In one instance, a female police officer opened fire to disperse a large mob of people who were looting a shop owned by foreign nationals.

Among the shops targeted was one opposite the Thokoza police station.

In other parts of Thokoza, some residents attempted to set a truck alight, but police dispersed them by firing rubber bullets at them.

Some looters were caught red-handed inside shops, while others ran away with the stolen goods.

Many businesses in the area, including fuel stations, remained closed for much of the day.

Elsewhere in the area, police were stationed at a local shopping centre where a large crowd attempted to loot several stores, including a Shoprite outlet.

Schools were closed earlier in the day after fake reports claimed that men were driving around the area kidnapping pupils.

It was also claimed that a school had been set alight.

Parents could be seen rushing to schools in the area to fetch their children.

The Gauteng Education Department subsequently dismissed the reports as fake news and called for calm in parts of Ekurhuleni.

In a statement, the department said: "It must be noted that there are circulating social media posts suggesting that Lungisani Primary School was torched this morning, the department strongly refutes all these allegations. We want to reiterate that no school was burned today.

We live in a world where facts and fiction get blurred
In times of uncertainty you need journalism you can trust. For only R75 per month, you have access to a world of in-depth analyses, investigative journalism, top opinions and a range of features. Journalism strengthens democracy. Invest in the future today.
Subscribe to News24
Related Links
Tshwane protests 'over' as City, taxi drivers reach agreement, condemn xenophobia
Two South Africans, one Zimbabwean woman among 5 killed during violent Gauteng unrest
Fake, old or not from SA: Don't believe '99%' of the viral Xenophobic messages, police warn
Next on News24
LIVE | Covid-19 in SA: Death toll at 21 289, with 778 571 confirmed cases