Thumbs up! New thumb-marking protocol for upcoming elections to prevent spread of Covid-19 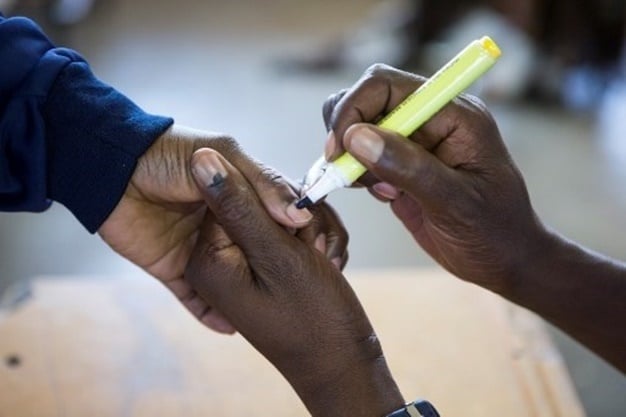 A voter gets his finger inked at a polling station.
Guillem Sartorio, AFP

To prevent the spread of Covid-19 on voting day, the traditional indelible ink marker pens will be replaced with a liquid that will be applied through the use of disposal buds, according to the Western Cape Electoral Commission of SA (IEC).

Voters will also be advised to bring along their own pens to mark their ballot papers, provincial electoral officer Michael Hendrickse said at a media information session on Tuesday.

Other protocols, which the IEC introduced for the 2020 by-elections, will be continued in the upcoming municipal elections, including strict social distancing outside and inside voting stations, mandatory mask-wearing and hand-sanitising upon entry.

The municipal elections are scheduled for 1 November; 96 parties are contesting in the province and 53 of them vying for a seat in the City of Cape Town.

Hendrickse said the IEC was monitoring areas that were identified as hotspots for possible conflict or other disruptions.

"We have a meeting in the run-up to the elections [with the police] every week, where we are being advised on the areas that we are monitoring for various reasons - for example, the recent issues of taxi-related violence, gang-related violence and also service delivery protests - that may occur."

Connectivity stability is also among the key challenges the IEC faces, Hendrickse said.

"When we don't have a stable network, that will impact on us. But our voter management devices are capable of working offline as well," he said. The devices replace the "zip-zip" machines that have been used since 1998.

READ | Voting during a pandemic: MPs call on all to adhere to health protocols in 15 by-elections

Blackouts remain a concern although Hendrickse said that Eskom indicated that no loadshedding was expected in the immediate future.

"It's not just having lighting in a voting station. The whole ward is dark and that can affect people participating…  Voter turnout is always an issue when it comes to local government elections – [this] is generally [seen] worldwide."

Service delivery protests and disputes could be another hurdle, he added.

"People, rightly, will use the elections as an opportunity to highlight their particular grievances around service delivery. They have the right to protest, obviously, but we want to ensure that those protests do not interfere with the rights of individuals...to actually vote."

He added that the IEC in the province was exploring the option of pop-up vaccination sites at voting stations.

"It's under no obligation – it's a choice whether they want to be [vaccinated]. But we found that if you take the vaccination to the voter [as with the voter registration drive] you give them the opportunity because not everybody can travel to a particular vaccination site," he said.

But I must stress: It is not a requirement for you to be vaccinated to vote.

Lucky Sunday for 3 Daily Lotto players
Full list of lottery results
Lockdown For
DAYS
HRS
MINS
Voting Booth
President Ramaphosa has punted the idea of mandatory Covid-19 vaccinations for South Africans. This is:
Please select an option Oops! Something went wrong, please try again later.
The right thing to do. We desperately need more South Africans vaccinated to prevent further mutations and restore normality in our lives.
71% - 9233 votes
A risky strategy. Compulsory vaccinations may have unintended consequences and damage our rollout campaign.
29% - 3703 votes
Previous Results
Podcasts
PODCAST | The Story: The Omicron variant and what we know so far