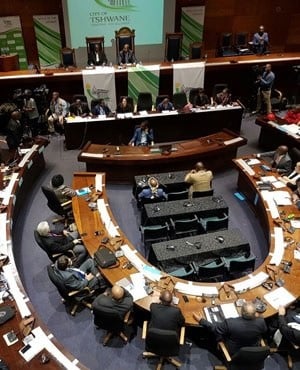 A special sitting of the Tshwane Council has spent much of Tuesday behind closed doors deliberating on Mayor Stevens Mokgalapa’s request to rescind the appointment of James Murphy as Acting City Manager.

In July, the City of Tshwane announced that it would be parting ways with its embattled city manager Moeketsi Mosola, following a separation agreement that was reached in another closed sitting of the council.

Murphy was appointed as the acting City Manager after Mosola vacated his office at the end of July.

However, Mosola did not vacate his office at the end of the month, nor has he, to date signed the separation agreement.

News24 previously reported that the City Manager was granted special leave and would remain in his position until August 30 2019.

While it is unclear why Mokgalapa wants to reverse the decision to appoint Murphy as acting City Manager as the matter and a report is being deliberated on behind closed doors, the ANC in Tshwane believes this is an attempt to have Mosola regain control.

"At the heart of the intention to rescind appointment of Mr. James Murphy as an acting City Manager is the 'big elephant' Dr Moeketsi Mosola to continue with his 'corruption patronage systems' and the black DA caucus is largely in that mix," the ANC said in a statement.

The ANC also accused Mosola of appointing Lorraine Tredaux as the acting City Manager, despite Council's resolution to appoint Murphy.

"We also would like to state it on record that due to this illegality, the decision by Dr. Moeketsi Mosola to appoint Ms Lorraine Tredaux as an acting City Manager is also illegal and not a Council resolution.

"The ANC is not going to agree with any attempt by the DA to install Dr. Moeketsi Mosola's puppet or for him to 'indirectly rule from the grave' and continue with his 'corrupt patronage systems' to unlawfully take money out of the City of Tshwane like he did with the Glad Africa irregular contract, to the tune of R500 million in less than a year in the 2017/8 financial year.

"From where we stand, there is absolutely no reason why Mr James Murphy who is the legally appointed acting City Manager shouldn't go on an execute a task assigned to him lawfully by Council.

"The ANC remains convinced that the decision taken during the Council meeting of 25 July 2019 to separate with the embattled City Manager Dr. Moeketsi Mosola was correct and we also think that Mr. James Murphy should act as City Manager as decided by Council on that faithful day."

ALSO READ: Accounting for GladAfrica: Will Tshwane city manager get away with it?

The ANC referred to the 2018 allegations of tender irregularity that led to engineering company Glad Africa securing a R12bn contract with the City of Tshwane, to provide project management support to the City.

The Auditor-General has since declared that the tender was irregular, leading to the contract being cancelled earlier this year.

Mosola was at the centre of the scandal as he awarded the tender.

We live in a world where facts and fiction get blurred
In times of uncertainty you need journalism you can trust. For only R75 per month, you have access to a world of in-depth analyses, investigative journalism, top opinions and a range of features. Journalism strengthens democracy. Invest in the future today.
Subscribe to News24
Related Links
Maile 'not yet' placing DA-led metros Tshwane and Johannesburg under administration
Tshwane's 'unlawful' reappointment of airport managers threatens to ground Wonderboom
ANC mulling court action against Tshwane council over 'tainted' water
Next on News24
LIVE | Covid-19 in SA: Death toll at 21 439, with 785 139 confirmed cases