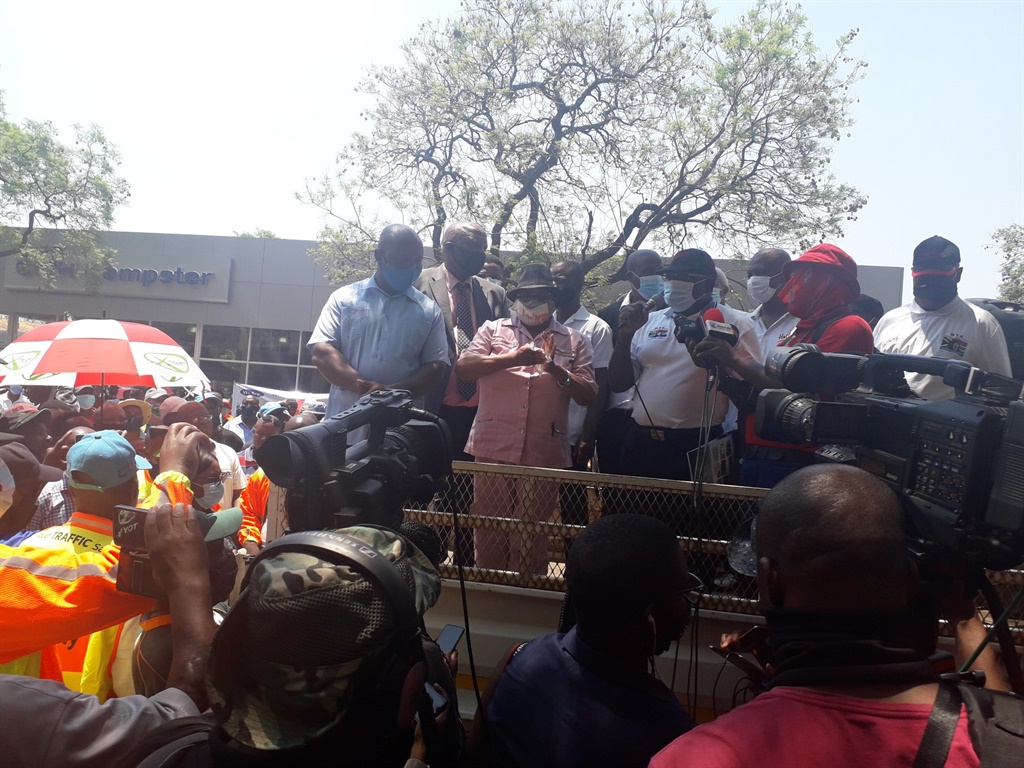 Deputy Transport Minister Dikeledi Magadzi was booed off stage by striking members of the National Taxi Alliance in Pretoria on Wednesday.

Magadzi was accepting a memorandum of demands from the NTA leadership on behalf of Minister Fikile Mbalula, when she was booed.

While accepting the memorandum, Magadzi who was on top of an open truck, together with the NTA leadership, and was cheered and even praised by some on the ground.

Some clapped their hands and whistled as she promised to respond to their demands.

They even called her a "hero" who was willing to listen to their demands.

She called on them to observe social distancing, as they were crowded and standing too close to each other, and also asked them to sanitise their hands.

They then booed her, with some telling her that, when ANC members were protesting in Bloemfontein on Friday, they were never told about social distancing.

"Why us? You started right, and now you are insulting us. We are adults and we know what we are doing. Your duty is to accept our memorandum and not to teach us about the coronavirus," a man from the crowd near the media shouted at Magadzi.

They then drowned her out with their loud voices, forcing the deputy minister to get off the truck, before being ushered by police and bodyguards to her offices.

Addressing members outside the Department of Transport offices, NTA president Francis Masitsa said they want what has been promised to them by Mbalula.

'We want our money'

"Mbalula, we want our money, if not we shall meet somewhere. If Mbalula wants us to disrespect him, we will do so. South Africa is a democratic country, not some monarchy.

"There are laws in line with the Constitution that govern this country. We take instructions from no one, least of all from the minister. We are prepared to engage with Mbalula. However, the incompetency in this department is of the highest order," said Masitsa.

Masitsa has also denied allegations that NTA members assaulted a City of Tshwane bus driver and later hijacked the vehicle earlier in the morning.

NTA general-secretary Alpheus Mlalazi claimed that Mbalula was biased towards, and favoured, Santaco and was deliberately ignoring them.

"Your (Mbalula) public speeches to force the (national taxi) lekgotla resolution on us, challenged your inability of understanding the rules governing the taxi industry. That lekgotla was a meeting by Mbalula and his friends. Those resolutions don't have an impact on us as NTA.

"Mbalula, respect NTA as an independent body, recognise NTA as a critical stakeholder in the taxi industry and public transport sector. We bought our cars, we didn't receive them for free. We are not funded by government. We work hard for our money. You must immediately publish the taxi industry subsidy as promised," Mlalazi said.

Among their demands, NTA has given Mbalula an ultimatum to respond to their written grievances contained in letters dated 26 August and 30 September.

The association said it was also aggrieved by Mbalula's intransigence in affording it a right enshrined in Section 18 of the Bill of Rights - freedom of association.

They want Mbalula to release the Covid-19 relief fund he had earlier promised for the benefit of deserving taxi drivers and taxi operators.

We live in a world where facts and fiction get blurred
In times of uncertainty you need journalism you can trust. For only R75 per month, you have access to a world of in-depth analyses, investigative journalism, top opinions and a range of features. Journalism strengthens democracy. Invest in the future today.
Subscribe to News24
Related Links
WATCH | N1 from Soweto gridlocked as striking taxi drivers block freeway
Taxi strike: Mbalula in heated confrontation in Tshwane, will not budge on proposed grant amount
EXPLAINER | Thousands stranded: Why taxis are striking across Gauteng
Next on News24
LIVE | Covid-19 in SA: Death toll at 21 477 as cases rise to 787 702