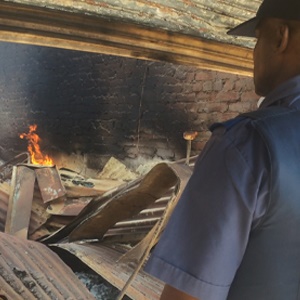 The death toll in Gauteng's widespread violence has risen to seven after police confirmed the discovery of two bodies, which were burned beyond recognition, in Alexandra, Johannesburg.

The two bodies were found inside shops torched by looters during xenophobic violence.

Makhubele said he was on his way to the scene to gather further information and told News24 bodies were found inside shops where people were collecting scrap metal.

"I can confirm two bodies were found in the rubble by a person who was looking for scrap. I am on my way there and will get more information when I get there."

The discovery of the bodies comes after two people were shot and killed on Tuesday night in the area around London Road, provincial police spokesperson Colonel Lungelo Dlamini said.

He added the shootings were not linked to xenophobic attacks.

"A motorist who was driving a vehicle without a registration number fired randomly at people who were on the street. One person died at the scene and the other in hospital. Two cases of murder are being investigated," Dlamini said.

He added no arrests have been made.

Earlier, Dlamini said the police had identified three of the five victims of recent violent attacks in central Johannesburg earlier this week.

He told News24 the two men who were killed in Brixton and Sophiatown on Tuesday were South Africans, while the security guard killed in Hillbrow on Monday was a Zimbabwean woman.

Dlamini said the nationalities of the two men killed in Hillbrow and Jeppestown on Monday and Tuesday were still unknown.

All five victims killed during the unrest were shot, he added.

Since the unrest spread from Tshwane to Johannesburg and Ekurhuleni on Sunday, 289 people have been arrested for looting and public violence.

Foreign nationals have been the main target in the unrest, with dozens of shops looted and burned, although South African-owned shops have also been broken into and looted.

"Last night in Ekurhuleni, 100 people were arrested when the police responded to several incidents of public violence and looting,” Dlamini said in a statement.

"Fifty-four of these suspects were surrounded by the police in Thokoza and Katlehong while they were inside two businesses stealing furniture and groceries. Others were arrested for public violence in Buhle Park, Germiston and Elsburg."

Since the arrests, there have also been a stark decline in public violence and looting in Johannesburg and Tshwane on Wednesday, Dlamini added.

On Wednesday, News24 reported the unrest in the Pretoria CBD was finally over, after the City of Tshwane and taxi operators reached an agreement.

While the taxi drivers were demonstrating in the CBD last Wednesday, after one of their own was shot and killed after accosting an alleged drug dealer, both the City and taxi associations distanced operators from the violence and looting during the protests.