By Saturday evening, the number of coronavirus infections in SA reached 1 187.
Getty Images

UK-based company Penlon is seemingly reluctant to help a group of South African businessmen, doctors and engineers reproduce a potentially life-saving mechanical ventilator it first produced nearly 40 years ago, because it was "marketing" the machines.

Penlon told News24 its immediate focus was the UK market, where it is one of two companies contracted to produce 30 000 ventilators, according to The Guardian.

Efforts to find an alternative solution to produce or procure ventilators is a critical feature of South African government’s immediate focus and a key focus area of one of several work streams set up by the department of trade and industry in response to the local novel coronavirus (Covid-19) outbreak.

READ | Battle stations: A team of top experts is being assembled to map the spread of Covid-19 in SA

The group, led by businessman Justin Corbett, has been in direct contact with people who are part of these work streams and News24 understands, their initiative was supported by key stakeholders.

As the number of South Africans to have contracted the novel coronavirus continues to rise sharply, the number of people who may soon need ventilators, also increases.

Corbett’s team identified the Penlon Nuffield 200 as a perfect device to attempt to reproduce, as it was devoid of electronics, did not require electricity to work and would be considerably cheaper to build than more sophisticated ventilators.

Marius Fourie, the managing director of Draeger South Africa – a subsidiary of Draeger in Germany, one of the leading manufacturers of ventilators – told News24 this week that there was undoubtedly a global shortage of ventilators and that supply chains were focused on the current epicentre of the pandemic – Europe.

He was also sceptical of efforts to set up a new production line for ventilators in the short time frame, saying it was practically not possible.

"We are all trying our best to give everyone a fair chance. It’s also unfair to now try and jump the queue. Africa is, unfortunately, at the back of the line right now," Fourie said.

An appeal on humanitarian grounds

According to email correspondence seen by News24, Corbett reached out to Penlon on Monday, asking for urgent assistance for the 'South Africa Emergency Ventilator Project'.

"Our group that is composed of doctors, engineers, industrialists and government. We have identified the Nuffield 200 vent as the most ideal ventilator to introduce into the market. Clearly the opportunity to procure thousands of these units from your esteemed company immediately is not realistic," Corbett wrote.

"We have chosen to start reverse engineering some old N200 units that we have, with the view to establishing a large scale modular manufacturing setup with the ultimate aim to produce these units in significant numbers in the next week or so," his email continues.

"We are appealing to your esteemed company on humanitarian grounds to urgently make all your production drawings and quality documents available to us so that we can fast track this development."

Penlon chief executive Guru Krishnamoorthy responded on Tuesday: "We are currently marketing Nuffield ventilators and hence transferring all drawings etc would be difficult." 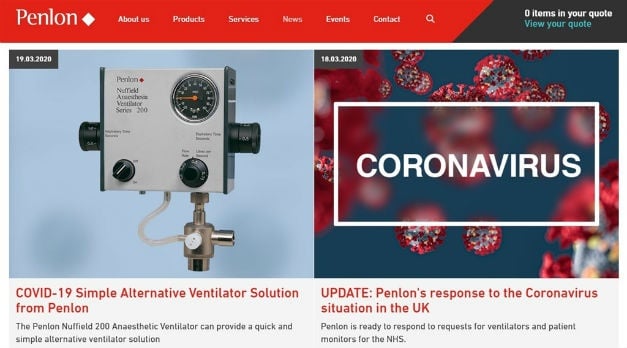 A screenshot of Penlon's website showing how it promotes the Nuffield 200 as a "simple alternative ventilator solution".

He also put Corbett in touch with people who dealt with sourcing components in case Corbett planned on refurbishing old units.

Corbett responded to Krishnamoorthy the following day, saying "motivated by humanitarian reasons I am willing to beg you to reconsider your decision".

He did not receive a response.

Corbett, in earlier emails, said the units they hoped to produce would be credited to Penlon, and if excess manufacturing capability existed, it would be made available to Penlon.

Corbett said the product was nearly 40 years old, and any patents would long have expired. UK patents, similar to the US, are valid for a period of 20 years.

Penlon told News24 it would be "wrong to suggest that Penlon sees the Nuffield 200 as a profit stream within its accounts" and that Krishnamoorthy’s response "is more appropriately viewed through the lens of a small company doing its utmost to scale up production to meet a pressing need".

"In reality very few of this old product would ever be sold. That is not the reason for the company’s response to Mr Corbett. Far from being more concerned with profits and marketing than saving lives, Penlon is actually deeply engaged in the challenge to produce ventilators for the UK based on another Penlon system," Penlon said in a statement.

News24 could not find other ventilator systems among the products advertised on Penlon’s website, other than the Nuffield 200.

The Guardian this week reported that Penlon’s Nuffield 200 was one of two devices manufactured in the UK, together with a portable ventilator made by the Smiths Group, that would be produced in large quantities to meet the demand for British healthcare systems.

Reuters reported on 21 March that Smiths would be making its PARAPC Plus portable ventilator available to other manufacturers to produce as "part of a coordinated attempt to tackle a shortage of life-saving equipment".

SA’s healthcare system has only around 3 000 critical care hospital beds available … and it is not enough | @SarahPeace6 #Covid19InSAhttps://t.co/jRTKwYvYrQ pic.twitter.com/C43FHHAHhL

According to Reuters, Smiths medical unit was providing intellectual property and advice to other companies to make the PARAPAC units, while at the same time it was ramping up its own production at its factory in Luton, north of London.

Penlon told News24 that because of its work to meet demand in the UK, "it does not have the resources available to dig out technical drawings of an old product".

"Penlon is very open to engaging as soon as the immediate priority for the UK has been addressed and the resources are released. Penlon is doing all it can to save lives," the statement concluded.

On 19 March, Penlon posted a news update on its website that billed the Nuffield 200 as a "quick and simple alternative ventilator solution" amid the Covid-19 outbreak and advised what other components would be needed to use the device effectively.

'Only 4 000 ventilators in the private sector'

According to one private businessman with knowledge of high-level government discussions, South Africa has an estimated 4 000 ventilators in the private sector, and around half that number available in the public sector.

They said multiple solutions to the ventilator shortage were being explored, but that Corbett’s solution had "seemed the most promising".

Early projections that informed President Cyril Ramaphosa’s decision to place the country in a state of national disaster, showed that if government response was slow or inadequate, anywhere between 100 000 people to 4.5 million could be infected by Covid-19.

A 21-day national lockdown that commenced on Friday is aimed at reducing the number of infections, which as of Friday morning totalled 1 170 with one recorded death, and aimed at mitigating a sudden onslaught of patients in need of critical care at South African hospitals.

By Saturday evening, the number of infections were 1 187.

To stay abreast of News24's rolling coverage on the Covid-19 outbreak, follow this link to our dedicated coronavirus site.

We live in a world where facts and fiction get blurred
In times of uncertainty you need journalism you can trust. For only R75 per month, you have access to a world of in-depth analyses, investigative journalism, top opinions and a range of features. Journalism strengthens democracy. Invest in the future today.
Subscribe to News24
Related Links
PODCAST | THE STORY: Covid-19 claims its first victim in South Africa - here's what we know
Silence in Johannesburg: 21 pics capturing how a virus forced a boisterous and brash city indoors
LIVE | Coronavirus infections rise to 1 187, SA's flu vaccines are understocked
Next on News24
LIVE | President Cyril Ramaphosa set to address the nation on Covid-19 at 20:00

2 bag the Daily Lotto jackpot!
Full list of lottery results
Lockdown For
DAYS
HRS
MINS
Voting Booth
The EFF has voted with the DA to ensure they now govern Johannesburg, Tshwane and Ekurhuleni. Was this:
Please select an option Oops! Something went wrong, please try again later.
A brilliant strategic move by the DA not to make formal coalition agreements
24% - 1846 votes
A brilliant strategic move by the EFF to force the DA to negotiate with them
16% - 1241 votes
A recipe for disaster and five more years of unstable local government
60% - 4583 votes
Previous Results
Podcasts
PODCAST | The Story: New era in South African politics dawns - leaving ANC to lick its wounds