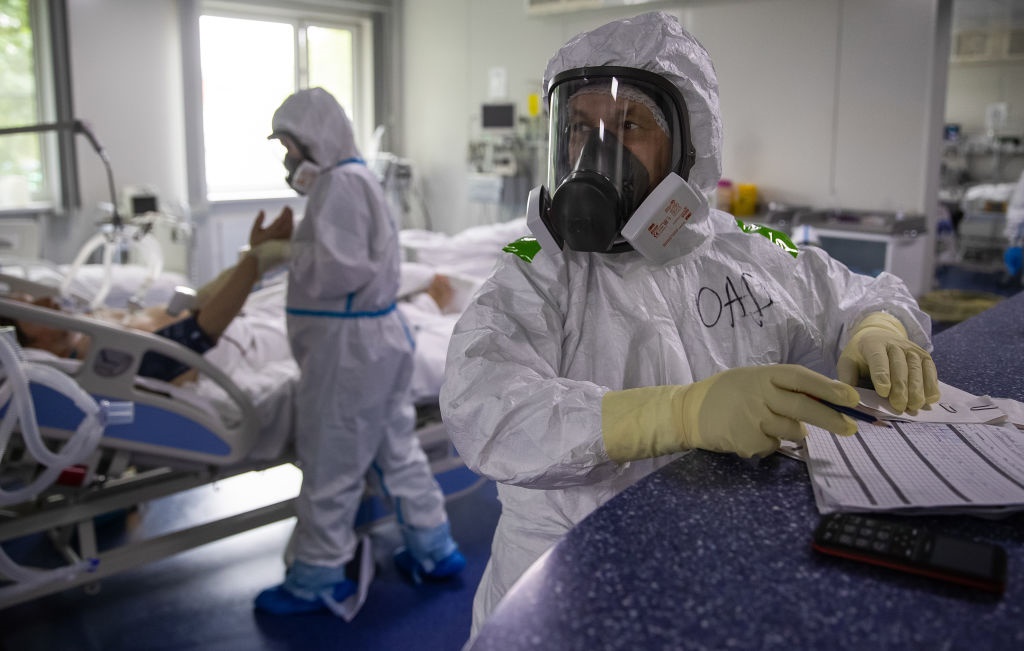 Labour unions including Cosatu representatives, as well as local and international advocacy groups, are calling for a Cape Town Covid-19 trial to be stopped, citing concerns about the study’s lack of transparency and community engagement.

The groups also demand that the trial’s investigators provide volunteer participants — health workers and other types of hospital employees such as security guards and administrative clerks — are given  protective gear.

In May, the Cape Town-based clinical research organisation, TASK, began a clinical trial to see if a common TB shot — the Bacille Calmette-Guérin (BCG) vaccine normally given to newborns — could help protect hospital workers from developing serious Covid-19. The 500-person study is one of 10 such trials underway globally.

There is currently no evidence showing that BCG offers protection against Covid-19, the World Health Organisation (WHO) says. But some researchers believe the vaccine holds the possibility to help our bodies fight off a range of illnesses other than TB — they hope that trials such as the South African one will hold the key to understanding more about this potential.

But now organisations such as South Africa’s Treatment Action Campaign, unions and the Vaccine Advocacy Resource Group (Varg) are calling for the trial to be suspended saying researchers have not provided satisfactory information on how community consultation was done around the study. Lingering concerns also remain, the groups say, about a lack of personal protective gear (PPE) such as masks and gloves given to hospital workers in the study.

Activists demand that the trial must be re-reviewed by the regulatory bodies that cleared it to begin enrolling volunteers, including the South African Health Products Regulatory Authority (Sahpra) before it can resume, according to a statement released on Friday night.

A similar review, organisations argue, must also be done by the independent research ethics committee at the Cape Town firm, Pharma-Ethics, which provided initial ethical clearance for the study.

READ | Private hospitals will take Covid-19 patients from public sector, even at a financial loss

“We are in full support of all research that is ethical, truly community-owned and accountable to the communities it purports to be in service to,” said the statement, which was also signed by the Kenyan chapter of the international Stop TB Partnership network. South African Health Minister, Zweli Mkhize, is a Stop TB Partnership board member.

The statement continues: “Each day that this trial is allowed to proceed without these critical checks and balances sets the broader accountable research agenda backwards and compromises the goodwill, the trust and the confidence that trial participants have in research not only for this trial but for trials to come.”

TASK had not responded to requests for comment on the latest concerns at the time of publication.

TASK has maintained that it consulted with the local TB activist group, TB Proof. Speaking to Bhekisisa earlier this week, TASK scientist, Caryn Upton, said the firm had brought TB Proof — an organisation advocating for protection for health workers from occupational TB — on board to consult on the trial and “also in terms of fulfilling the community engagement and [volunteer] recruitment”.

But in Friday’s statement, organisations say that TASK told TB Proof not to engage broader civil society further in discussions about the trial.

Groups also say TB Proof could not answer key questions on issues related to ethics as well as the composition of an oversight community advisory board.

In response to questions from Bheksisa, TB Proof clarified that it was told not to communicate with civil society on behalf of the trial.

“TASK requested TB Proof not to engage on behalf of the Trial Consortium at the civil society consultation that took place on 11 June and to limit answers directly related to TB Proof’s contributions and community engagement.”

"Many of the questions posed in this letter addressed to TASK, but also sent to TB Proof, concerned trial processes and procedures and information about enrolled participants. These questions should be directed to the trial consortium and relevant ethics committees."

The TB non-profit also expressed concern about the allegations levelled at it and the broader trial, saying these are not an accurate reflection of the engagements to date.

There are no international standards on community engagement, but the most recent 2006 guidelines from the South African national health department advise clinical trials to consider establishing a community advisory board. These bodies are composed of people from the community in which the trial is being held, for instance, religious or traditional leaders or trial participants.

Today, most major HIV and TB clinical trials in South Africa have bodies such as these that help ensure communication between trial organisers and communities, via, for example, regular community meetings.

Previously, TB Proof told Bhekisisa that information about the trial was circulated on several WhatsApp groups and social media platforms reaching around 2 000 healthcare workers collectively and it held a 27 May meeting with members of the department of science and innovation, Sahpra and civil society.

The TB non-profit also said it had discussed the trial with the Covid-19 People’s Coalition, an alliance of 300 NGOs, as well as during a 13 May South African National Aids Council (Sanac) TB task team meeting.

TB Proof, Varg and other organisations held a subsequent 11 June call to address the latest concerns about the trial. During this call — a recording of which has been publicly released —

Sanac members said they were surprised to learn that TB Proof had counted merely raising the issue at a meeting as “consultation”.

"[To] later on to learn that a meeting that was called not for a purpose of discussing the trial, but the continuous work of the TB task team is now referred to as part of the consultation that … is not correct,” Sanac Civil Society Forum chairperson Steve Letsike can be heard saying on the call.

In response to Bhekisisa questions, TB Proof said: “There appears to be disagreement among organisations regarding what constitutes 'engagement'."

They also noted that the 13 May Sanac meeting was “only one of several steps TB Proof undertook to engage other organisations and health workers in this trial” and that they do not consider their interactions with Sanac during the meeting as formal engagement about the trial.

Ntando Yola, a founding member of the Vaccine Advocacy Resource Group, expressed concern on the call that this was part of a problematic pattern where information about the trial was shared on a conference call and then that was meant to equate to community engagement.

He went on to say: “This is a constant issue, be it with donors or with researchers, who then will have a meeting and say we have consulted with people or at least we’ve consulted with committees.”

Demands to stop the trial come little more than a week after advocacy organisations, including VARG, issued a statement saying that all Covid-19 clinical studies, including the TASK study, should ensure participants have access to free personal protective equipment (PPE), such as masks and gloves.

Currently, PPE is not provided to any hospital workers in the TASK trial as part of this standard of care. Instead, they rely on the Western Cape health department, which has experienced shortages of masks since South Africa’s coronavirus outbreak started in March.

Upton previously told Bhekisisa that the trial could not afford to provide PPE to participants and that no other similar trial internationally was giving volunteers this type of gear. But she said if TASK received additional funding to provide PPE it would. The trial has approached the South African Medical Research Council for additional funding to allow it to enroll more participants.

TB Proof says that in response to concerns about the lack of PPE, the trial has undertaken to seek additional ethical guidance on whether it should provide this kind of equipment.

The TB organisation described civil society calls to suspend the trial as "deeply concerning" during "a time of unprecedented emergency" in a media statement.

“This trial investigates an urgent question on whether the BCG vaccine can help to protect health workers on the frontline from falling ill and dying of Covid-19 and TB. If BCG is effective, they deserve to receive a rapid answer. If BCG is not effective, this is also an urgent answer, in order to preserve the global supply of BCG to protect children against severe forms of TB.”

Meanwhile, organisations such as the Treatment Action Campaign remain adamant the trial cannot proceed until it undergoes more thorough reviews.

“We must ensure that, should this trial go ahead after review,” they write in Friday’s statement, “it can truly be called ethical, accountable and community-owned and shaped by a comprehensive consultative process that is led by the community that the trial purports to serve: healthcare workers”.

This story was produced by the Bhekisisa Centre for Health Journalism. Subscribe to the newsletter.
We live in a world where facts and fiction get blurred
In times of uncertainty you need journalism you can trust. For 14 free days, you can have access to a world of in-depth analyses, investigative journalism, top opinions and a range of features. Journalism strengthens democracy. Invest in the future today. Thereafter you will be billed R75 per month. You can cancel anytime and if you cancel within 14 days you won't be billed.
Subscribe to News24
Related Links
OPINION: Covid-19 is a chance to talk about death
Fresh Covid-19 concerns send parts of Beijing into lockdown
Western Cape neighbourhood watches to resume, but restricted to 20 patrollers
Next on News24
LIVE | Covid-19 in SA: 6 375 new cases

R440k for one Daily Lotto winner!
Full list of lottery results
Voting Booth
Have you and your family been counted in Census 2022?
Please select an option Oops! Something went wrong, please try again later.
Yes
48% - 792 votes
No
52% - 871 votes
Previous Results
Podcasts
PODCAST | The Story: What is behind Khayelitsha's recent mass shootings?