UPDATE | Puppy will 'make it' after teen bodybuilder broke its leg 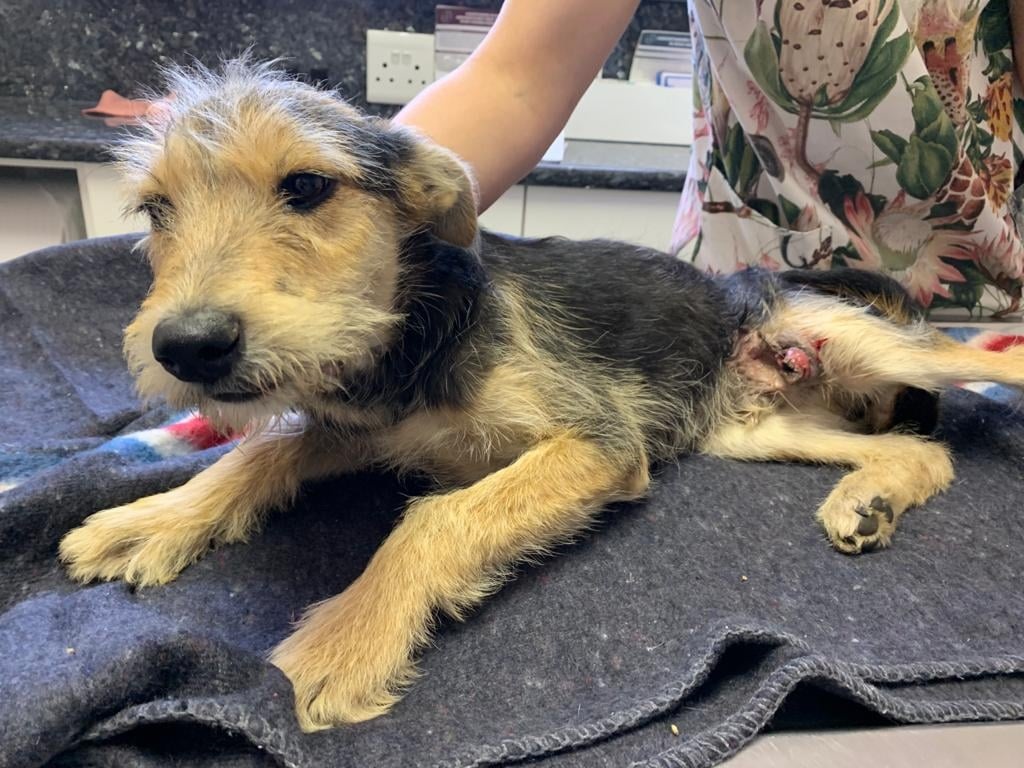 Rover, whose leg was broken on Sunday night.
Supplied

The puppy that had its leg broken in Bloemfontein on Sunday night, allegedly by a teenage bodybuilder, will "make it" after it underwent surgery on Monday.

"He is still in a lot of pain and is receiving medication. But he will make it," Matthee said.

News24 earlier reported that a 17-year-old bodybuilder allegedly broke the dog's leg to "test his strength" in the Bayswater area on Sunday night after 23:00.

"What we saw shook us," the Bloemfontein SPCA said on its Facebook page. "We found a puppy lying in a pool of blood and hardly able to move. We struggled to get to the dog as the 17-year-old tried to fight us off."

The boy told Matthee that he was a bodybuilder who used supplements and wanted to test his strength.

"He saw on social media how people lifted heavy stuff to see what their breaking limits are. We still wanted to know what had happened to the dog, so we asked him again. He said that he wanted to see what he can lift and how strong he was. So he started by lifting heavy metals and breaking a broom stick, but it was not enough. He then googled how strong bones were and what amount of force can break [them]. He then called his dog and started to press on the dog's leg."

The teen proceeded to break the dog's leg until the bone pierced through its skin. Police arrested him after he initially refused to give SPCA officials access to Rover.

"We have opened a case of animal abuse against the teenager. We are now awaiting feedback from the police," Matthee said.

According to Matthee, the discovery was traumatic.

"We got a call that a dog was crying. So we expected to find a dog that got stuck somewhere or got impaled by a palisade fence. When we got to the house the gates were wide open so we assumed the owners let us in to assist.

"But when we got there we saw the dog lying in a pool of blood. It was shocking to see that. I have never seen anything like it."

Matthee said the teenager was "hysterical" and panicking amid the dog's cries.

"I think he was frightened because he immediately tried to keep us away from the dog. He wanted to physically assault us."

Since news of the incident became known, the SPCA in Bloemfontein has been inundated with calls from people who want to adopt Rover.

"We will follow the normal SPCA processes to have Rover adopted as soon as he has stabilised. Once he can walk normally again [and] the veterinarian gives the thumbs-up, he will be given a new home."

The SPCA is yet to pay for Rover's surgery and has appealed to the public to help cover the costs, which are in excess of R8 000.

Donations can be made by SMSing the word "Bloemspca" to 42646 (SMSes cost R30) or by visiting www.bloemfonteinspca.co.za.

We live in a world where facts and fiction get blurred
In times of uncertainty you need journalism you can trust. For only R75 per month, you have access to a world of in-depth analyses, investigative journalism, top opinions and a range of features. Journalism strengthens democracy. Invest in the future today.
Subscribe to News24
Related Links
Bodybuilder boy from Bloemfontein breaks puppy's leg to 'test his strength'
SPCA team saves 3 dogs from drain in Cape Town
SPCA saves dogs, cats, tortoise, hadeda and a dassie
Next on News24
LIVE | Covid-19 in SA: Cases rise by 2 273