Ladismith is a small town situated in the Eden region of the Western Cape. But for many, it is nothing close to a biblical paradise. Poverty, decay and unemployment are rife in this small community along the Swartberg mountains in the western Klein Karoo.

It is where 36-year-old Afrikaans rocker Willim Welsyn grew up and it is a place he still holds close to his heart. It's also where he met 63-year-old Bert Lintvelt, who he refers to as a "Klein Karoo cowboy".

Bert visited a friend of his in the town and liked the place so much he decided to stay, says Willim. And when Willim's older sister, Zazzie Barnard van Rooyen, moved to the Netherlands with her husband, they asked Bert to look after their house.

"But see, this is the kind of guy Bert is - they would come back for a visit and then Bert had built them a swimming pool, like, from scratch. And that lawn of theirs is maintained to perfection, it looks like a green on a golf course."

Bert was so impressed with Willim's music that he decided he wanted to make him a guitar. "I'd heard a lot about Willim Welsyn. The first time I saw him perform with some of his friends, my jaw dropped to the floor.

"I know I can do anything with my hands. That night I decided I'm going to build this man a real guitar. But then a lot of time passed before the plan crossed my mind again. I wanted to make a guitar and I happened to be making braai grids at the time, so I thought, why not make a braai grid shaped like a guitar?"

So, in 2018, Bert presented Willim with a unique birthday gift: a guitar-shaped braai grid. The picture that started it all - rocker Willim Welsyn with the first Blitzkriek Braaikaaster.
Supplied PHOTO: Gerhard Grobler

"It was such a one-of-a-kind gift! I googled it and couldn't find anything like it. So I put a picture of it on Facebook and all of a sudden people wanted to place orders - everybody wanted one."

Without consulting Bert, Willim and Zazzie took 10 orders. Fed up with working behind his computer screen, Bert accepted the challenge, stepped up to the anvil and moved into the garage. After sleepless nights, he poured his blood, sweat and tears into sculpting those first 10 mild steel Blitzkriek Braaikaasters. These were all individually numbered.

But then Bert told Willim that this thing must never rust, it must shine. And it was through the test of metal and a will of iron that the blacksmith finally found his format: stainless steel.

"What do you buy your dad or uncle for their birthday - another pair of socks? At last, here is something unique," says Willim. "The only problem is that these grids are so beautiful, people don't want to braai on them. So I have a prerequisite, if you buy one, you HAVE to braai on it..." Bert became obsessed with the tuning and retuning of the Blitzkriek Braaikaaster. Every single Braaikaaster that left Bert's hands exponentially increased the demand and pressure for more.

As a craftsman, his trade was a lonely one. He needed apprentices.

"I was unemployed," says Werner, "and one day I came and asked Bert for a job, and he took me to his garage and explained a little about the work he does. Then he asked if I could do the polishing, and I managed to master it. Next, I started working with a grinder."

Werner managed to master many of the skills, such as welding, and earlier this year Bert asked him if he knew of someone else who could help them out.

Novi was expecting to do normal housework, not a "man's work".

"I had no idea what I was going to do," she says. "But I enjoy it because I can now work with the grinder and I can weld a little. It's fun!" Together, the three have built more than 100 stainless steel Blitzkriek Braaikaasters. All of this, with only two grinders, one drill, one vice and one welding machine.

Some of these grids have ended up in the hands of some famous people, such as legendary Rolling Stones guitarist Keith Richards and Springbok World Cup winner Eben Etzebeth, according to Willim.

And there are Braaikaasters in homes all over the world: Australia, the Netherlands, the UK, Mozambique, Switzerland, Russia, and the US. "Imagine what would be possible with an expanded production line of raw materials, tools, employees and job security," says Willim.

"Right now, Bert and his team can't keep up with the demand. At this point, Bert owns two grinders, a drill and a welding machine.

"So we want to expand this operation by giving them tools and resources to make more of these fantastic grids faster. That's why I decided to launch a crowdfunding campaign on Heritage Day to get them the stuff they need: more tools and more people, without compromising on quality. We need steel, lots of welding rods, jigs, sandpaper, and another vice, among other things.

"If you donate, you could also stand a chance of winning the 100th Braaikaaster.

"We have mastered the research and design of this proudly South African Braaikaaster and now we want to take it to the next level. We want to start building new guitar-grid designs and accessories: The Stratobraaikaaster, the Blomkaaster, the Babybraai, the Braai2D2 and more."

Willim could think of no better day than Heritage day to launch his campaign to help the manufacturers of the "coolest braai grid in the world".

"To think that one picture started all of this. It has given Bert a new lease on life and it has created employment opportunities. They have a new purpose. And I want to tell their story so that people can see how special all of this is." Bert at work in his garage.
Supplied PHOTO: Willim Welsyn 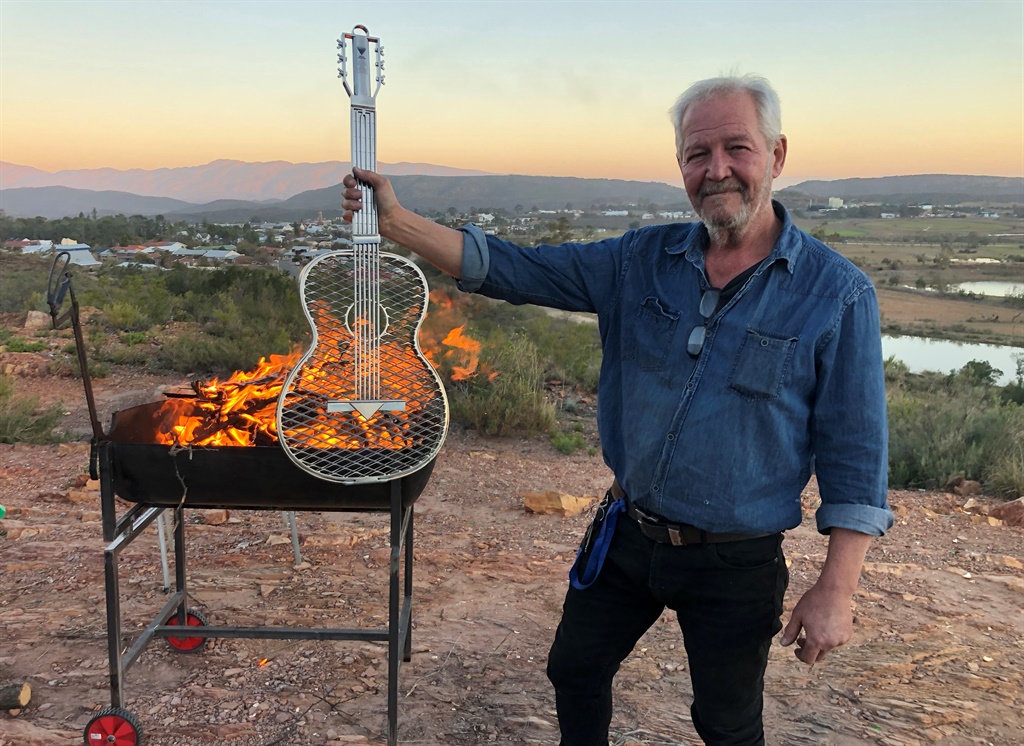 Bert says he, Boetie and Novi have become like a family. But he is almost moved to tears when he describes the poverty in the area.

"These are good people. They don't have electricity, so they have to cook on a fire. We all cook on fire, but it's fancy because we braai. But it's all they have. If you look at the state of their clothes, the shoes they wear... You can't save the whole community, but in some [communities] you can make a difference. And it's wonderful, the beautiful people you find here. People with the heart and the will to work.

"So yes, if we can get something off the ground to uplift people too, that'll be wonderful."

We live in a world where facts and fiction get blurred
In times of uncertainty you need journalism you can trust. For only R75 per month, you have access to a world of in-depth analyses, investigative journalism, top opinions and a range of features. Journalism strengthens democracy. Invest in the future today.
Subscribe to News24
Related Links
Let's show the world and do the Jerusalema dance challenge this Heritage Day - Ramaphosa
Maimane and Philander join forces to distribute food, starting with wors
Coronavirus: Pietermaritzburg youth donate groceries to street hawkers as lockdown bites
Next on News24
LIVE | UK confirms first 2 cases of Omicron variant

2 bag the Daily Lotto jackpot!
Full list of lottery results
Lockdown For
DAYS
HRS
MINS
Voting Booth
The EFF has voted with the DA to ensure they now govern Johannesburg, Tshwane and Ekurhuleni. Was this:
Please select an option Oops! Something went wrong, please try again later.
A brilliant strategic move by the DA not to make formal coalition agreements
25% - 1643 votes
A brilliant strategic move by the EFF to force the DA to negotiate with them
16% - 1088 votes
A recipe for disaster and five more years of unstable local government
59% - 3968 votes
Previous Results
Podcasts
PODCAST | The Story: New era in South African politics dawns - leaving ANC to lick its wounds