WATCH: Hijackings, shootings and robberies: 7 road crimes you should see 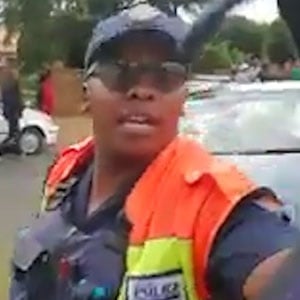 One of the officers who approached the Daveyton resident. (Screengrab)

WATCH: Quick-thinking motorist leaves hijackers empty-handed - The video, which was shared by anti-crime advocate Yusuf Abramjee on Twitter, shows a white Chevrolet sedan pulling up across the road from a vehicle pulling out of its driveway. Suspects are seen getting out of the Chevrolet and head toward the motorist.

WATCH: Durban metro cop loses her cool with motorist - A video of an altercation between a metro police officer and a motorist on Dr Pixley Kaseme Street in Durban has gone viral on social media.

WATCH: Durban woman found alive after hijacking, kidnapping drama - Following a frantic search, authorities have found a Durban woman who was hijacked and abducted in Morningside.

WATCH: Police threaten to slap man for filming pulled over Lamborghini - A resident of Daveyton on the East Rand was threatened by Ekurhuleni metro police after he stopped to film footage of a green Lamborghini that had been pulled over by officers.

We live in a world where facts and fiction get blurred
In times of uncertainty you need journalism you can trust. For only R75 per month, you have access to a world of in-depth analyses, investigative journalism, top opinions and a range of features. Journalism strengthens democracy. Invest in the future today.
Subscribe to News24
Related Links
B-Secure van hijacked in Prestbury
Woman tells of killing hijacker
WATCH: Police hunt for hijackers after woman attacked at petrol station in Ennerdale
Next on News24
LIVE | SA death toll at 54 620, as the number of new cases now at 1 590 370