WATCH | This will affect everyone, says activist as protests against Shell's seismic survey plans intensify

South Africans are intensifying protests against oil company Shell and are taking to the streets and beaches to protest against seismic tests on the Wild Coast in the Eastern Cape.

Environmental organisations and activists are fighting Shell in and outside court - on Sunday, groups of protesters carrying placards gathered at a beach in Plettenberg Bay.

Organiser Judy Anderson said a daily protest walk along the beaches was in the pipeline to make holidaymakers aware of the impact of the seismic survey.

"We are hoping more people will join so we can conscientise as many as possible, more so holidaymakers and anyone enjoying the waterfront, surfing, scuba diving and beach walks as they are an interested and affected party. Residents of Plettenberg Bay held a protest at the beach against Shell's seismic survey in the Eastern Cape's Wild Coast. (Photo: Supplied)

"Countless people rely on the ocean and each and everyone is affected by this. The ocean is a food source and is used for spiritual guidance too," she added.

"If Shell's plan succeeds, seismic surveys will take place from Plettenberg Bay to Gqeberha. I can't imagine an oil rig outside Beacon Island Hotel … fracking has been going on for years, having this close to home in the pristine and beautiful Wild Coast is terrifying."

Anderson said Shell was "clutching at straws" trying to convince communities it would not harm the ocean through fossil fuel exploration.

In Johannesburg, activists took to Shell's headquarters in Bryanston.

They later moved to a Shell petrol station, blocking the entrance. Another protest was scheduled to take place on Sunday in London outside South Africa House in Trafalgar Square. Groups of people have since held protests in major cities such as Cape Town and eThekwini in KwaZulu-Natal.

Seismic surveys involve using airguns to send pulses of sound into water. As these sound waves hit the seafloor, they are reflected back and special equipment is used to read the information to map out the seafloor and detect where oil or gas reserves are. 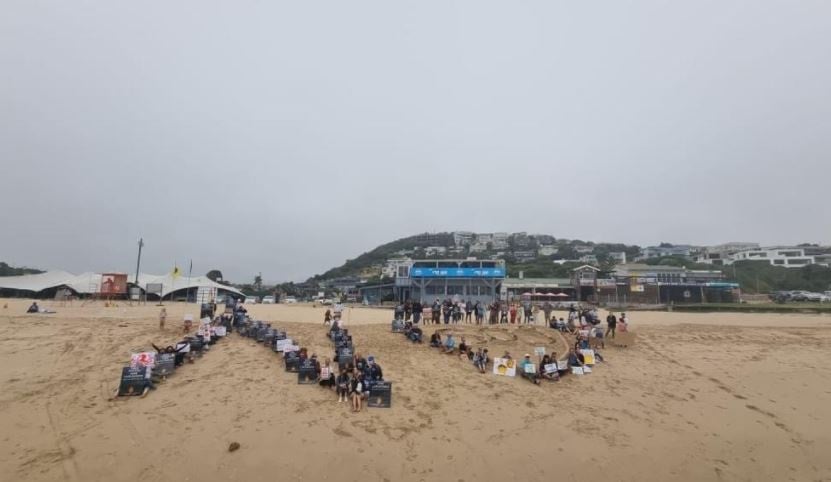 There have been changes to the law since Shell was granted the exploration permit in 2014.

Activists said the changes brought the validity of the permit into question.

Following the dismissal of an application in the Eastern Cape division of the Makhanda High Court this week to stop Shell from commencing with the seismic survey, a second urgent application was filed by a collective of environmental organisations, local tribal leaders and fishermen in Port St Johns to stop Shell.

The oil giant maintained the exploration go-ahead it received in 2014 was still valid.