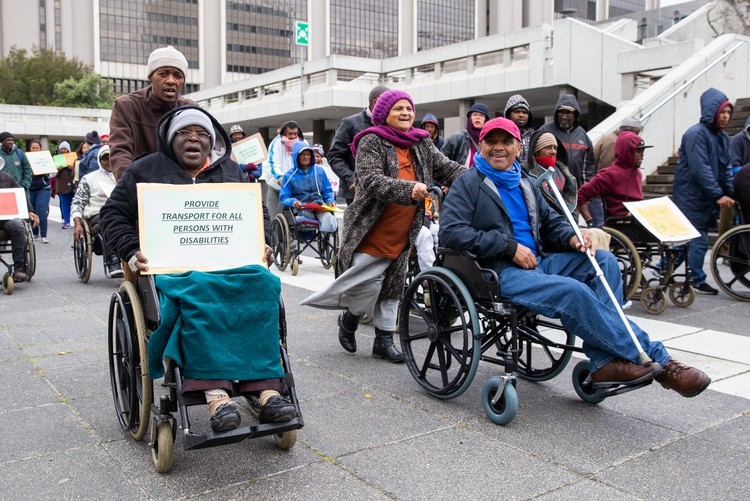 People living with disability marched from Artscape on the Foreshore to the Cape Town Civic Centre, demanding a better service from Dial-A-Ride transport and that the service extend to informal settlements. (Photo: Ashraf Hendricks)

"We want to travel like everyone else", read a placard at a protest by about 50 people living with disabilities who marched from Artscape on the Foreshore to the Cape Town Civic Centre on Wednesday. "We are humans," read another placard. They were demanding a better service from Dial-A-Ride transport.

The march, organised by the Cape Town Association for the Physically Disabled, drew people from Nyanga, Gugulethu, Khayelitsha, Philippi and Dunoon, GroundUp reported.

In April 2016, users of the Dial-A-Ride service protested over the availability, cost and safety of the service and against the use of MyCiTi branding on the vehicles.

The City has been providing the Dial-a-Ride (DAR) service to residents with special needs since 1999. DAR is subsidised by the Western Cape Government and the City. It is used by people with disabilities to get to schools, work and hospitals.

"To remain on the waiting list for years is unfair while Dial-a-Ride buses are driving around with one or two people inside," read the memorandum of demands.

The protesters want more buses; caregivers to be allowed to accompany them; the drivers to be given training on how to deal with people with disabilities; and the service to be extended to people living in informal settlements.

Mandilakhe Mlungwana of the Cape Town Association for the Physically Disabled, based in Gugulethu, said as social workers they have been receiving complaints from clients about Dial-a-Ride.

"Their buses do not want to go into informal settlements and they refuse to take someone with their carers even though most of the people need to be accompanied.

"Most of the clients depend only on social grants and are struggling to afford the fees that they have to pay," said Mlungwana.

Among the protesters was 66-year-old Joshua Matsidiso from Dunoon. He says he has been on the waiting list since 2011.

"I applied and got a letter four months later saying that they can't accommodate me because [they] were full and [they had] put me on the waiting list. Till today I am still on that waiting list.

"I have given up on calling and checking on what is going on because it is the same story all the time. I need their help because I stay alone and have to spend my pension money paying people to transport me. That is money that I could have spent on food," he said.

Matsidiso says he has to wheel himself to the clinic, which is about 5km from his house.

"If it is raining like today, I have to pay someone R20 to go and fetch my medication or hire a car for R200, because taxis do not stop for us," said Matsidiso.

Thozi Mciki, who is 52, says he has to hire two cars when going to Groote Schuur Hospital. Mciki has a large, special electric wheelchair, which travels in one car. He cannot bend his legs so he has to lie down in another car. He has been on the DAR waiting list since October 2017.

Ronald Kingma, manager for the Transport and Urban Development Authority, received the memorandum, which gave the City until October 22 to respond.

Mayoral committee member for transport and urban development Brett Herron told GroundUp that the service currently transports 350 regular users and 2 270 ad hoc passengers. It has a fleet of 24 vehicles retro-fitted for wheelchairs.

"As from 1 July 2016, the City only allows caregivers/travel assistants on the DAR service if an occupational therapist has found that their assistance is necessary. Unfortunately, we can make no exceptions," said Herron.

We live in a world where facts and fiction get blurred
In times of uncertainty you need journalism you can trust. For only R75 per month, you have access to a world of in-depth analyses, investigative journalism, top opinions and a range of features. Journalism strengthens democracy. Invest in the future today.
Subscribe to News24
Related Links
WATCH: People with disabilities march for jobs in Tshwane
Local leaders experience life in a wheelchair
Why no wheelchair parking at banks?
Next on News24
LIVE | SA on track to receive second batch of J&J Covid-19 vaccine on Saturday, govt confirms