Will it be enough? Inside South Africa’s plan to ramp up coronavirus testing 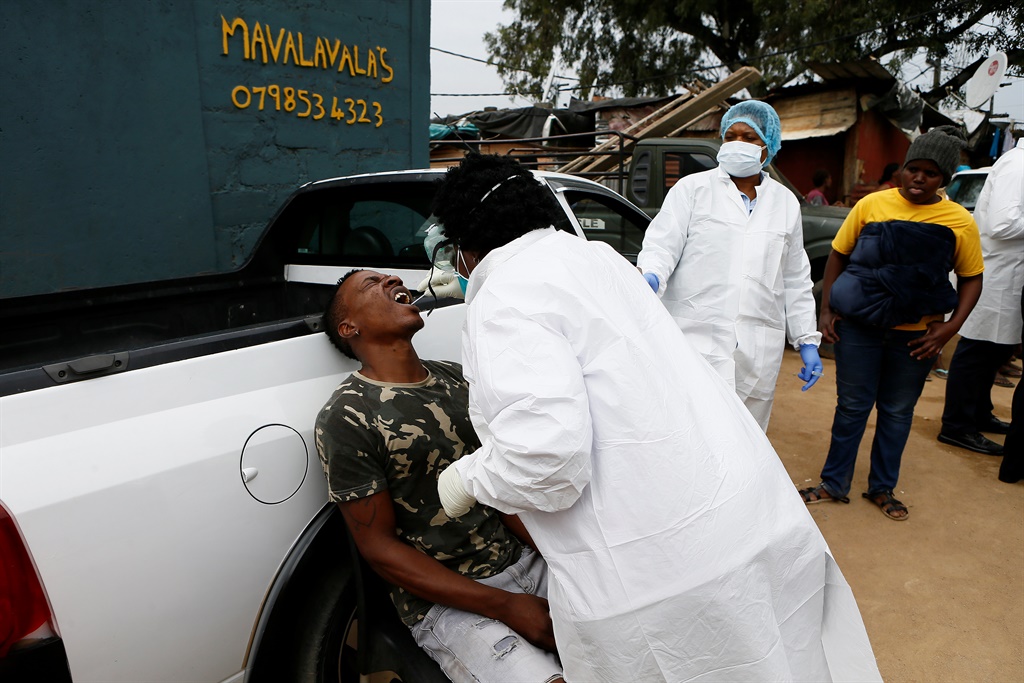 The National Health Laboratory Service (NHLS) has only managed to do about 6 000 tests since the first coronavirus case was reported about a month ago, which is slightly higher than the number they claim to be able to do in a day.

What test does South Africa currently use?

South Africa detects the coronavirus, known as SARS-CoV-2, by using a technique called a polymerase chain reaction, or PCR. A health worker uses a swab (it looks like a giant earbud) to collect a sample taken from a person's throat and/or nose, which is then placed in a type of fluid and sent to the lab. The sample is fed into a PCR machine that makes thousands of copies of the virus' genes - if it is present in the patient's sample - until there is enough of the virus to detect.

According to National Institute for Communicable Diseases (NICD) guidelines, if someone tests positive, this will be confirmed with another test. If that diagnostic comes back negative, then the test will be repeated to verify the result. This kind of repeat testing means it can take up to four days to definitively detect Covid-19. While waiting for the result, the person needs to self-quarantine.

The use of PCR to test for SARS-CoV-2, an approach that is used in South Africa at present, is recommended by the World Health Organisation.

How many PCR tests can South Africa run per day and are we on track?

South Africa is currently able to do 5 000 tests per day through our National Health Laboratory Service (NHLS), its CEO, Kamy Chetty, said in a press release at the end of March.

The idea was to increase that to 15 000 per day starting in April and eventually process 36 000 tests daily by the end of the month, said Chetty.

Right now, the country is not conducting close to 5 000 tests per day in public labs - and private labs are conducting more than 4 000 every day.

Private labs have done about 80% of all tests in the country.

Here s how we have done the calculations:

A total of 44 292 tests was done by Wednesday, according to the NICD. Only around 6 000 of those have been done by public laboratories under the NHLS, Health Minister Zweli Mkhize said during a briefing on Wednesday evening.

That means the NHLS has only managed to do about 6 000 tests since the first case was reported about a month ago, which is slightly higher than the number they claim to be able to do in a day. Over the past week, public labs have increased testing to around 570 per day.

On Wednesday, Mkhize said at a press briefing: "This [the total number of tests and low number of tests conducted at the NHLS] is way too few considering the size of our population and other important factors such as inequality, poverty and the underlying disease burden we have."

Will PCR tests alone allow us to diagnose enough people?

The short answer is no.

First, the global demand for PCR tests makes it challenging for South Africa to ensure it has enough of the chemicals needed to conduct the tests - all countries need these.

It is therefore better for the country to not put all its eggs in one basket: procuring a wider range of test technologies will increase its chances of getting hold of them.

But there are also other reasons.

Firstly, PCR tests are expensive - in the private sector, for instance, a test can cost anything between R900 and R 1400 - and they are time consuming to do. At a Thursday press briefing, Mkhize said: "We want to conduct hundreds of thousands of tests."

Although the NICD says the test takes 48 hours to produce, at the moment test results can take up to four days. Because of this, results are produced too slowly to ramp up testing significantly within a short period of time - against the background of a fast-moving epidemic.

The slow pace at which results are produced also makes it difficult to use PCR tests to map the Covid-19 outbreak in South Africa so that researchers know exactly where the virus is spreading and are then able to send out contact tracers to hot spots as fast as possible.

"Speed is of the essence, it's important that we are able to reach out to those who are infected as fast as possible," Mkhize told journalists Thursday. "Knowing where and how this disease spreads is crucial. This will enable us to stay as far ahead of the virus as we can."

In order not to run out of PCR tests, and to help labs keep up with the high demand for testing, South Africa has stringent testing criteria. Many people who might be infected with SARS-CoV-2, for instance, those without any or with only a few symptoms, therefore do not qualify for testing.

PCR tests also require specialised equipment that is hard to move around: PCR machines are about the size of large photocopiers and require trained technicians to operate them, which limits testing only to laboratories that have these machines and staff on hand. And, when health workers collect samples from people's noses and throats, they are exposed to the risk of infection.

Lastly, while PCR tests produce few false positives (so they are really good at detecting the coronavirus), false negatives (results that incorrectly indicate that someone is clear of the virus), are sometimes a problem.

PCR tests are therefore great at detecting the virus in patients with acute infection - in other words, those who have clear symptoms - but not so great at picking up the virus in those with mild symptoms and who are in the early or late stages of infection when there is not enough of the virus present in someone's system for the test to detect.

Will South Africa use any other coronavirus tests?

There are plans underway to start using another, much faster, PCR test to diagnose Covid-19 cases using GeneXpert machines.

South Africa's national laboratory service has more than 180 of these GeneXpert machines already on hand as they are already used for tuberculosis testing.

These testing machines come in two different size options, a large one for laboratory settings and a much smaller version for clinics. The tests are considerably easier to use in the new mobile testing vans set up for Covid-19, which will be going to rural communities.

"The advantage, according to the supplier, is that tests can be processed in 45 minutes, and the smaller machines can be placed in mobile vehicles, which makes it ideal for community testing.

"It's a pity that this new test kit was not available sooner, as it would have made a huge difference to how testing gets done. We are nevertheless pleased that it will be ready shortly," Chetty said in a statement.

On Wednesday, during a briefing, Mkhize said he was hopeful these tests would be rolled out by the end of next week. But, he added, the exact timeframe was dependent on when the new coronavirus tests are validated by the NHLS, or in other words tested to make sure they worked in the South African context.

Once the GeneXpert tests have been rolled out, Mkhize said, capacity will increase to 30 000 tests per day.

A new form of testing, called a rapid antibody test, is currently being investigated as another option for use in the country.

When will the new tests arrive?

So far, the health department has not given an exact date when the new tests will arrive.

This timeline will be dependent on how quickly the tests can be approved and validated by the relevant bodies.

All diagnostic tests, being imported, need to be approved by the South African Health Products Regulatory Authority (SAHPRA) first.

While, ordinarily, this may take some time, the SAHPRA will be speeding up the process for licensing medical devices, such as these test kits, to respond to the Covid-19 pandemic timorously.

In order to make sure that tests still meet the necessary standards despite the fast-paced decision-making, each rapid antibody test kit company will need to have approval from another regulatory body recognised by the SAHPRA. This includes kits being used in Australia, Europe, Canada, Brazil, Japan, and the US.

The US Food and Drug Administration has already approved the use of GeneXperts to diagnose Covid-19 cases, which is why the NICD has recommended them. But, they still need to go through the SAHPRA's validation process before the test can be used.

A potential cause for delay with the arrival of any new tests is that they will have to be imported and, at this time, air travel is severely restricted globally. These test manufacturers are largely based in China and Germany. Should the kits be approved and the companies have enough stock, there would still need to be a plane available to deliver them.

We live in a world where facts and fiction get blurred
In times of uncertainty you need journalism you can trust. For only R75 per month, you have access to a world of in-depth analyses, investigative journalism, top opinions and a range of features. Journalism strengthens democracy. Invest in the future today.
Subscribe to News24
Related Links
Covid-19 testing: Only a fraction of Mkhize’s 60 mobile units are ready
OPINION: Four reasons to be hopeful about South Africa’s coronavirus testing plan
Mass coronavirus screening and testing programme to be rolled out - Ramaphosa
Next on News24
LIVE | Covid-19: SA ponders vaccine mandate as world grapples with Omicron