Will they stay or will they go? Army's time in Cape Town running out

It was touted as a potential silver bullet - armed soldiers bringing gangsterism to its knees after months of bloodshed as gunmen ran amok on the Cape Flats.

But with a few days remaining, the reality of gangsters this week running fearlessly in the volatile streets of Manenberg as shots fly, was evidence that the much-anticipated deployment might have been a waste of money, argued Roegchanda Pascoe.

"Nothing has changed," Pascoe, the chairperson of the Manenberg Safety Forum, said.

"The same fear people felt in July when the army was deployed is what is felt today. This whole exercise was just a political ploy - a plaster that didn't fix anything."

Manenberg, about 17km outside of Cape Town, was the army's first stop after they hit the ground on July 18. The 1 320 soldiers were to provide support to the police as they focused on Cape Town's gang-ridden areas at a cost of R23.3m.

The two-month deployment will come to an end on Monday.

The police, though, have said more than a thousand arrests were made as part of Operation Lockdown, which saw forces embark on raids, foot patrols, chopper drops, vehicle checkpoints and roadblocks in 10 identified areas on the Cape Flats - Manenberg, Bishop Lavis, Mitchells Plain, Delft, Elsies River, Nyanga, Khayelitsha, Mfuleni, Philippi and Kraaifontein.

These policed areas at the time recorded the highest number of attempted murders.

But in its final week on the ground, Pascoe said, Manenberg had been more volatile than ever.

"Manenberg is a red zone. The ambulances can't come here [without a police escort]. The deployment cost a good couple of millions, but it's been ineffective. More people are dying."

She believed Operation Lockdown should have been implemented literally.

'Parade not the solution'

"The identified areas should have been locked down - no one in or out. Search every house, including that of the pastors and imams. You would be surprised at what you would find," Pascoe said.

A soldier keeps an eye on a roadblock in Manenberg. (Tammy Petersen)

"Search the women carrying washing baskets hiding guns and bullets. No one should be exempt.

"This parade we saw was not the solution. It won't stop anything."

Western Cape Premier Alan Winde has requested that the deployment should be extended for at least six months as the affected areas have seen little in the way of a decrease in violent crime.

He said there was no doubt the police did not have enough resources to fight the crime battle alone, and appealed to the president (Cyril Ramaphosa) to allow the provincial government to be more involved should the extension be approved.

On Wednesday, Police Minister Bheki Cele's spokesperson, Lirandzu Themba, told News24 a decision had not yet been taken to extend the deployment.

The various security agencies would have to "assess the situation on the ground", and whether there was a need for this, she said.

"Should the deployment be extended, presidential minutes will then be prepared and Parliament will be informed accordingly."

Many arrests, but areas not stabilised

Francina Lukas, the acting chairperson of the provincial community policing board, said while an impressive number of suspects were apprehended, the deployment did not do what was hoped: bring down the murder rate.

"The main objective was to stabilise the specific areas, but we didn't see much stabilisation," Lukas added.

The board supported the call for the deployment to be extended and the soldiers to remain in a "supporting capacity".

"I don't think the army can ever do the police's job. Theirs is to protect our borders and the country. The police must be allowed the space to fulfil their function, but we must recognise that they can't win this war on crime alone," she argued.

Lukas believed neighbourhood watches needed to be properly trained and be seen as the police's partners in crime prevention. 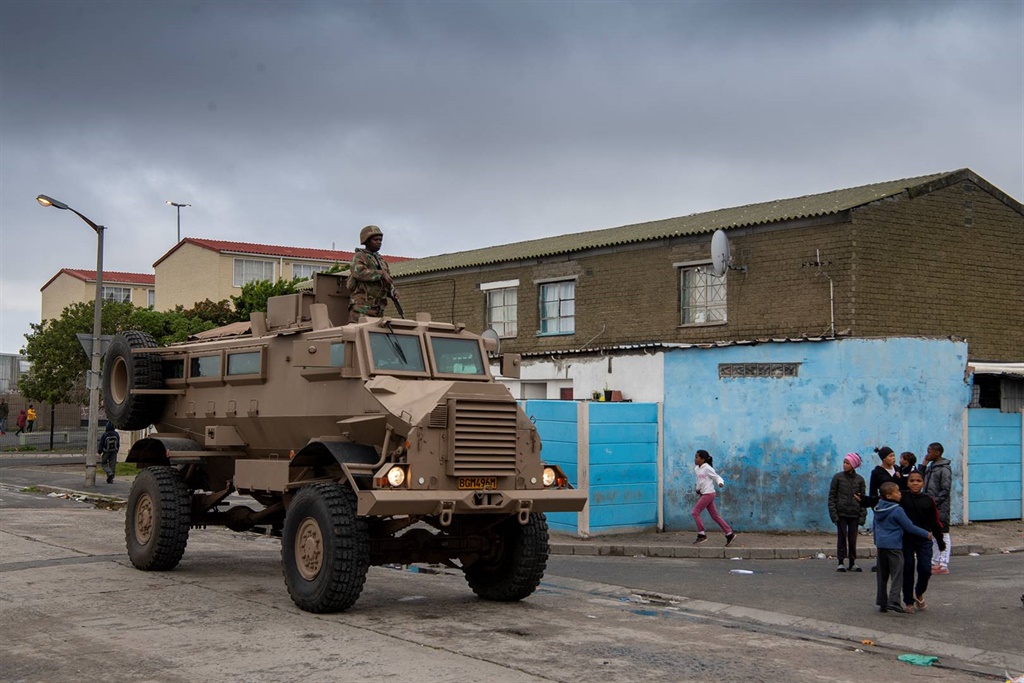 On the streets of Manenberg. (Jaco Marais, Netwerk24)

"There needs to be closer co-operation because they are the people who live in the communities, who have the intelligence and knowledge of who the criminals are and where they hide out."

'I hope they stay, but they need to change strategy'

City of Cape Town mayoral committee member for safety and security JP Smith said while he, too, supported the call for the army to remain in the identified areas, the way in which they were deployed "didn't fully utilise its skills and resources".

"We need [the SANDF] as a peacekeeping force, while the SAPS do investigations, arrests and charges. The army should be there when the police aren't," he added.

"I hope the army carries on, but change strategy and work independently."

According to Smith, the "big failure" of the operation was the lack of crime intelligence, which he called a "glaring deficiency".

"It's like throwing bricks and cement but building without a plan."

He criticised the police's information management, dismissing its current harvesting of crime intelligence as inadequate.

Smith said while the City was grateful for the defence force's intervention, the strategy needed to be re-examined and tweaked.

"They can't just keep the peace. They actually have to prevent the violence."

SANDF spokesperson Siphiwe Dlamini told News24 on Friday that, as things stand, the deployment ends on Monday the 16th, as per the deployment papers.

Should there be a need for the troops to stay, that decision will only be made after an assessment is concluded by both the police and the SANDF, and a recommendation sent to the political principals, for them to take the matter forward, he said.

*Due to a national moratorium, crime statistics unique to certain locations cannot be released outside the annual release of the financial year crime stats.

We live in a world where facts and fiction get blurred
In times of uncertainty you need journalism you can trust. For 14 free days, you can have access to a world of in-depth analyses, investigative journalism, top opinions and a range of features. Journalism strengthens democracy. Invest in the future today. Thereafter you will be billed R75 per month. You can cancel anytime and if you cancel within 14 days you won't be billed.
Subscribe to News24
Related Links
'Still a massive hill to climb' - Winde's reasons for wanting army to stay extra 6 months
ANALYSIS: Soldiers won't stem gang violence because the army is in a sorry state
Next on News24
BREAKING NEWS LIVE | Two decomposed bodies found in grave in Cape Town nature reserve