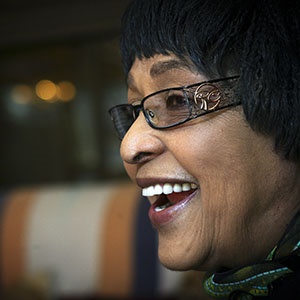 The body of struggle icon Mama Winnie Madikizela-Mandela has left her Orlando West home for the very last time.

The coffin, which was covered by a South African flag, left the house in a black hearse at around 08:30 on Saturday.

Madikizela-Mandela died at the Milpark hospital after a long illness on April 2. She was 81.

The ANC held a vigil for her on Friday night.

A private service was held at the home at around 06:00 and the body was viewed for the last time.

The procession then headed to Orlando Stadium where the main funeral service was taking place.

After the service, the procession is expected to go to the Fourways Memorial Park, where she will be laid to rest.

Some of the family members were transported to the stadium in white buses and President Cyril Ramaphosa's motorcade followed shortly after.

We live in a world where facts and fiction get blurred
In times of uncertainty you need journalism you can trust. For only R75 per month, you have access to a world of in-depth analyses, investigative journalism, top opinions and a range of features. Journalism strengthens democracy. Invest in the future today.
Subscribe to News24
Related Links
Mama Winnie didn’t die... she multiplied in us - supporters
South Africa says farewell to Mama Winnie
3 presidents to pay their respects to Mama Winnie
Next on News24
LIVE | SA's Covid-19 death toll at 50 647, with 1 520 206 confirmed cases

Here are your Lotto and Lotto Plus results
Full list of lottery results
Lockdown For
DAYS
HRS
MINS
Voting Booth
When a Covid-19 vaccine for under 16's becomes available, will you be taking your children to get it?
Please select an option Oops! Something went wrong, please try again later.
Yes, immediately!
38% - 4097 votes
I'll wait to see how others respond
26% - 2787 votes
No, I don't think they need it
36% - 3933 votes
Previous Results
Podcasts
PODCAST | MISSING MATTHEW EPISODE 3: Decades of false starts add to a family's despair