Your weather update: A hot Monday in store for most of SA It will be a hot Monday across most parts of the country with the temperature scaling 30°C in most cities, according to the South African Weather Service.

Gauteng will be fine and hot becoming partly cloudy in the north from the afternoon. The expected UVB sunburn index is high.

You can expect it to be cloudy and warm to hot in Mpumalanga, with isolated showers and thundershowers, except in the extreme west.

Limpopo will be partly cloudy and hot to very hot with isolated showers and thundershowers over the central parts.

The North West will be fine to hot.

The Free State will be fine and hot, but warm in the extreme east.

The Northern Cape will be cool along the coast, otherwise fine and warm to hot in the north. The wind along the coast will be moderate south-easterly, becoming fresh to strong in the afternoon.

It will be partly cloudy in the morning with fog patches in places along the west coast of the Western Cape. Otherwise, it will be fine and cool but warm to hot in places over the interior. The wind along the coast will be fresh to strong westerly to south-westerly but light and variable north of Cape Point in the morning. The expected UVB sunburn index is extreme.

In the western half of the Eastern Cape, it will be cloudy in the northeast at first, otherwise fine and warm but hot over the interior. It will become cloudy in the south from the evening.

The wind along the coast will be light to moderate north-westerly, becoming moderate to fresh south-westerly by mid-morning, but strong in the east from the afternoon.

The eastern half of the Eastern Cape will be cloudy in the south of the escarpment at first with isolated early morning showers and rain. Otherwise, it will be fine and warm to hot becoming partly cloudy from the afternoon. The wind along the coast will be light westerly, becoming moderate south-easterly by late morning, but moderate south-westerly in the south by evening.

KwaZulu-Natal will be partly cloudy in the west where it will be hot, otherwise cloudy and cool to warm with isolated showers and thundershowers. The wind along the coast will be moderate southerly to south-easterly, but easterly to north-easterly in the south, spreading to the north by the afternoon. The expected UVB sunburn index is moderate. 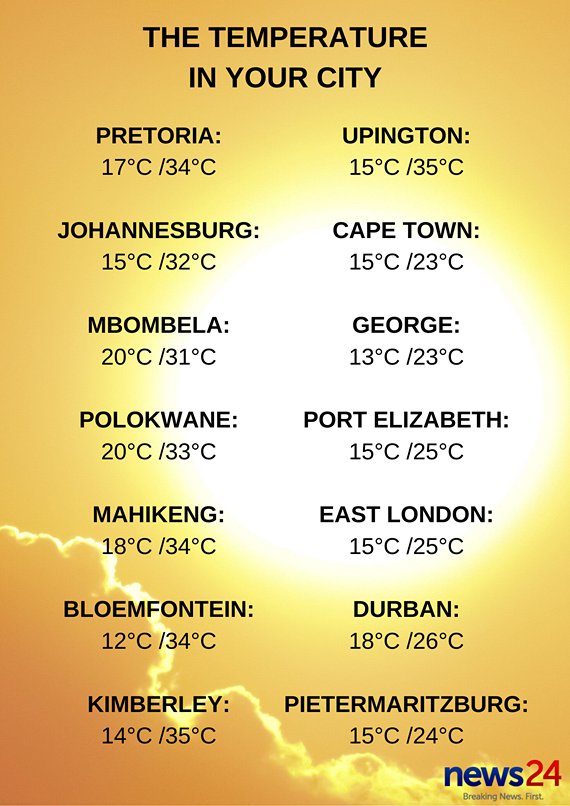 We live in a world where facts and fiction get blurred
In times of uncertainty you need journalism you can trust. For only R75 per month, you have access to a world of in-depth analyses, investigative journalism, top opinions and a range of features. Journalism strengthens democracy. Invest in the future today.
Subscribe to News24
Related Links
PICS | Tornado spotted in Ulundi as severe storm rips through KZN
More thunderstorms expected in KZN, as another tornado hits the province
Tornado strikes Utrecht amid warning of severe thunderstorms in KZN
Next on News24
LIVE | Covid-19 in SA: Death toll at 20 968, with 769 759 confirmed cases