Scott Ramsat
Share
We were dwarfed by a baobab tree in the Northern Tuli Game Reserve of south-eastern Botswana. I stretched out my arms against the trunk, then walked slowly around it and measured the circumference, which came to about 20 metres.

“This one is just a baby,” my guide and instructor Okwa Sarefo laughed. Age and size, it turns out, is decidedly relative in the African bush.

“Baobab trees are the oldest living things in Africa” Okwa told us. “Some really big specimens with circumferences of 40 metres could be over 3 000 years old.” The EcoTraining camp on the banks of the remote Matloutse River offers a variety of hands-on nature training courses. I’d joined up to what is essentially a crash course in zoology, botany, herpetology, ecology and wilderness philosophy, all rolled into one.

I’d come here to better understand Africa’s natural heritage, to learn about things large and small, from dung beetles to baobabs. In the process, I inadvertently unlearned a few things that I had been taught in city classrooms. Needless to say, after a few days, I’d been impressed – and sometimes overwhelmed – by Okwa’s knowledge. A member of the Bayei water-bushmen tribe in the Okavango Delta, he’s been living and working in Botswana’s wilderness his whole life.

As a young boy he went to school, but his real education, he said, was the natural world of the Delta; hunting, fishing, wandering and admiring his wild neighbourhood.

He learned to read and write quickly, and at age 12 he started poling a mokoro through the myriad channels, dodging hippos and crocodiles, and developing an uncanny sense of direction. By age 20 he was guiding foreign tourists deep into the wildest areas.

Today, at age 38, he’s a veteran of the bush, and knows almost everything (by his own admission, you can never know everything about Africa’s natural world). But he does know every bird, every tree, every mammal, every reptile, and almost every insect…and he knows how they all fit together.

And he’s seen it all. Charged by elephant? Many times. Tossed out of a canoe by a hippo? A couple of times. Witnessed a leopard pulling an impala out of a python’s mouth? Once. Ever had to shoot an animal? Never.

Okwa hardly ever carries a rifle. His understanding of animals is innate, and his identity is tied into the land, the sky, the trees and the animals.

“I grew up in the bush, I live in the bush, and I will die in the bush. This is my home. I can’t be anywhere else. I tried working in an office for a few years. I hated it. I am happiest here among the wild animals.”

As we learned from Okwa, everything here is intricate and complex, from a simple blade of grass to a large bull elephant. And everything is connected to everything else.

“Tell me,” Okwa asked our group of students as we spotted some dung beetles rolling some elephant dung along the road, “what’s the role of these insects in the bushveld? Besides cleaning up the dung of course.”

Dung beetles, it turns out, are important dispersal agents, collecting manure into a ball, laying their eggs inside, and rolling the ball into a hole in the ground where the larvae of the beetle can hatch. In the process, the seeds of grass and trees in the dung are also buried.

I had never considered that an ancient, regal baobab tree could have originated from the breeding habits of a poo-loving beetle four thousand years ago. But there you have it – they’re connected in some way.

“Without a dung beetle, perhaps this baobab tree would never have grown here?” Okwa said. “But without water, without oxygen, without soil and without sunshine, nothing of what you see here would exist. Everything is in relationship to everything else. Nothing survives without the help of other things. Even man.” 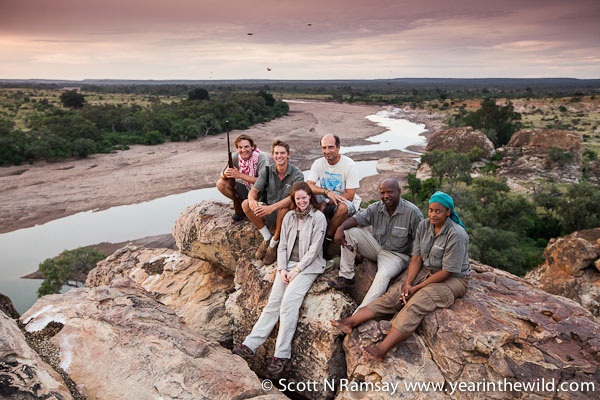 This was the big lesson. For sure, on the Ecotraining course you’ll learn how to identify the birds, grasses, reptiles, mammals and trees.

But what struck me most about Okwa was the lessons the African bushveld could teach people of the “modern” world. Confronted with the complex splendor of the African bushveld, most foreign people – or those with “modern” educations – are flummoxed and inspired by the immensity of life on display. How do you explain it all?

Consider the numbers: there are thousands of plant and animal species, all interacting with each other continuously, each one finding its niche, co-operating with each-other, being eaten by something or eating something, or being born, growing or dying. The possible permutations of interactions are immense, and certainly beyond statistical modeling.

And here’s the thing: it all works! Year after year, century after century, millennia after millennia, Africa’s natural ecosystem supports itself, and keeps sprouting new species, of which we are a relatively recent addition.

Everything is in balance, and everything is harmonious. And guess what? There isn’t a professor, scientist (or industrialist) for three hundred kilometres in all directions.

Confronted by the African bushveld, we may realize that despite our remarkable achievements, humans are not the only impressive life forces.

That title also belongs to any number of other living things: the baobab tree, the elephant, the crack of lightning, the flooding river, the black mamba and the roaring lion.

Or what about the humble dung beetle? In the process of doing all his dirty work, he happens to sow the seed of the mighty baobab tree.

For more info visit on the eco training courses visit Ecotraining.co.za or Mashatu.

We live in a world where facts and fiction get blurred
In times of uncertainty you need journalism you can trust. For only R75 per month, you have access to a world of in-depth analyses, investigative journalism, top opinions and a range of features. Journalism strengthens democracy. Invest in the future today.
Subscribe to News24
Related Links
Kgalagadi and the threat of fracking
Botswana's Mashatu Reserve in 7 striking images
Next on News24
Wild(ish) animals who think they're human