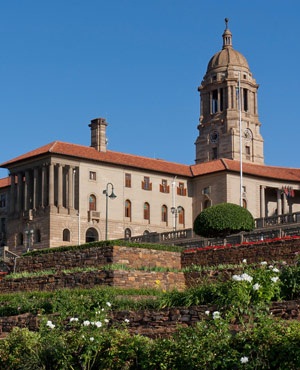 (File)
Shutterstock [http://www.shutterstock.com]
Cape Town - Preparations are underway for the Presidential Inauguration taking place on Saturday, 24 May 2014 in the Nelson Mandela Amphitheatre at the Union Buildings.

Government announced on its website the following travel arrangements and road closures for the momentous event and encouraged all South Africans to attend if possible.

Twenty-six heads of State and 11 Prime Ministers and/or Vice-Presidents are expected to attend the proceedings. The event will kick off with invited guests and members of the public arriving at the Nelson Mandela Amphitheatre at the Union Buildings and the Southern Lawns from 08:00 on Saturday morning.

No private vehicle access to the Union Buildings or the area immediately surrounding the venue will be allowed, but Park and Ride facilities will be available.

Tshwane Metro Police will effect road closures in and around the Union Buildings precinct even though the event is taking place on a weekend and motorists are kindly requested to adhere to the arrangements made for this day.

The Park and Ride facility for invited guests and VIPs will be at Rietondale Park on Soutpansberg Road - and it will be open from o5:00.

Guests who will be transported from Rietondale Park are expected to be seated in the Nelson Mandela Amphitheatre at the Union Buildings by 08:30.

The Park and Ride for members of the public will be at the Tshwane Events Centre - and it will operate from 06:00.

A number of road closures, detailed below, will be in operation around the Union Buildings and Bryntirion. Residents in streets affected by these closures will be asked to present their municipal accounts – or certified copies thereof – at the traffic control points.

Residents living in affected streets are asked to choose the shortest route or closest entry and exit points for access because Stanza Bopape Street and Government Avenue will be a traffic-free zone.

Normal bus routes and public transport routes will be diverted as well on 24 May 2014.

Traffic control points will be set up at the following intersections:

Construction on the Bus Rapid Transit project will continue.Tshwane Bus Service will operate about 80 buses between the Tshwane Events Centre (Tshwabec) on Stanza Bopape Street in the west of the city from 06:00 on May 24.

These buses will transport members of the public to the Southern Lawns of the Union Buildings.

Members of the public attending the occasion are advised that the following items are forbidden at the event:

- Alcohol or drugs
- Firearms or weapons
- Bottles or cans.

The Department of Arts and Culture will, in the course of the next few days, host a detailed briefing on the cultural programme for May 24, which will feature a morning session with a diverse range of performances spanning DJs, hip-hop and salsa acts, Afrikaans pop, jazz ensembles, Sotho and Tswana dance.

All South Africans were encouraged to attend in the announcement, with those who cannot attend advised to follow proceedings on television and radio, or at 47 public viewing areas in the provinces."

We live in a world where facts and fiction get blurred
In times of uncertainty you need journalism you can trust. For only R75 per month, you have access to a world of in-depth analyses, investigative journalism, top opinions and a range of features. Journalism strengthens democracy. Invest in the future today.
Subscribe to News24
Related Links
The long walk to the Union Buildings
Next on News24
'Dire' state of Robben Island under the spotlight

Lucky Sunday for 3 Daily Lotto players
Full list of lottery results
Lockdown For
DAYS
HRS
MINS
Voting Booth
Facebook is facing a fresh crisis after a former employee turned whistle-blower leaked internal company research. Do you still use Facebook?
Please select an option Oops! Something went wrong, please try again later.
Yes, the benefits outweigh the risk for me
32% - 2285 votes
No, I have deleted it
38% - 2693 votes
Yes, but I am considering deleting it
30% - 2183 votes
Previous Results
Podcasts
PODCAST | Ballot Box: Why Facebook is not doing enough against election misinformation