Airline 'bumping' of travellers falls to lowest rate ever, after passenger dragged off plane 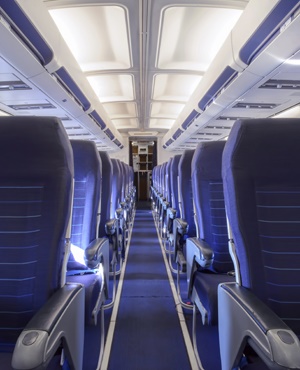 Airlines bumped passengers off flights at the lowest rate on record last year after United Airlines was pilloried when a passenger was dragged off a full plane.

The Transportation Department said on Thursday, 08 February, that airlines bumped about one passenger in every 29 000 in 2017, roughly half the rate of the year before.

The figures don't count passengers who accept travel vouchers or other offers to voluntarily give up their seat on an oversold flight. Using those offers, airlines have been steadily reducing bumping rates for several years, but the trend gained momentum after the April incident in which airport security officers dragged a 69-year-old man off a United Express plane in Chicago.

Meanwhile, there were 117 long delays in December during which passengers were trapped in planes on the ground, unable to reach an airport terminal. A few planes were stuck up to seven hours. Most occurred in Atlanta and involved Delta flights — Atlanta is Delta's biggest hub.

The government says 96 domestic flights were stuck on the ground at least three hours, including 77 during a power outage that shut down the Atlanta airport on 17 December. There were 14 others that occurred at the same airport during a snowstorm on 8 December.

Another 21 long delays involved international flights, with 19 during the Atlanta power failure.

Airlines can be fined if a domestic flight is stuck on the ground for over three hours or an international flight for more than four hours. The Transportation Department says it was investigating all the long delays.

United vaulted to the top of the government's latest ratings for on-time flights, which cover December. Delta and Alaska Airlines were next, respectively.

JetBlue Airways had the worst record, with one in four December flights arriving late. The government counts a flight as on-time if it arrives no more than 14 minutes behind schedule.

The rate of forcing passengers off oversold flights was the lowest since the Transportation Department started keeping records in 1995, beating the previous record set in 2016.

Airlines now are faster to bribe passengers on oversold flights to give up their seats, usually by offering travel vouchers. Last year, 341 703 passengers volunteered their seats while airlines forced off or bumped 23 223.

After the United Express fiasco, United, Delta, American and others changed policies to reduce the need to bump passengers. Some gave airport agents authority to offer bigger bonuses for giving up a seat.

Southwest Airlines accounted for about one-third of bumped passengers — 8 279 in all — but Spirit Airlines had the highest bumping rate, at one in every 12 000 passengers.

We live in a world where facts and fiction get blurred
In times of uncertainty you need journalism you can trust. For only R75 per month, you have access to a world of in-depth analyses, investigative journalism, top opinions and a range of features. Journalism strengthens democracy. Invest in the future today.
Subscribe to News24
Related Links
United Airlines raises limit on payments to bumped flyers to $10k
Naked passenger forces plane back to Anchorage
Plane full of plumbers makes u-turn due to broken toilet
Next on News24
WATCH: Travel the world from your phone with these short videos