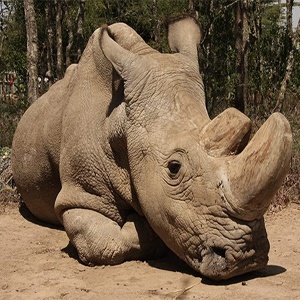 Cape Town - Sudan, the last male northern white rhino has died in Kenya at the age of 45, after suffering with age-related infections for a number of months.

The rhino - often referred to as the lone bachelor - had become a symbol of efforts to save his subspecies from extinction. When Sudan was born in 1973 in the wild in Shambe, South Sudan, there were about 700 of his kind left in existence.

Sudan was being treated for age-related complications that led to degenerative changes in muscles and bones combined with extensive skin wounds.  His condition worsened significantly in the last 24 hours, he was unable to stand up and was suffering a great deal.

The veterinary team from the Dvur Králové Zoo, Ol Pejeta and Kenya Wildlife Service made the decision to euthanize him.

Unfortunately, Sudan’s death leaves just two female northern white rhinos on the planet; his daughter Najin and her daughter Fatu, who remain at Ol Pejeta. The only hope for the preservation of this subspecies now lies in developing in vitro fertilisation (IVF) techniques using eggs from the two remaining females, stored northern white rhino semen from males and surrogate southern white rhino females.

“We on Ol Pejeta are all saddened by Sudan’s death. He was a great ambassador for his species and will be remembered for the work he did to raise awareness globally of the plight facing not only rhinos, but also the many thousands of other species facing extinction as a result of unsustainable human activity. One day, his demise will hopefully be seen as a seminal moment for conservationists world wide,” said Richard Vigne, Ol Pejeta’s CEO.

Ironically, Sudan's death comes as hundreds of scientists and government envoys gather in Colombia at a biodiversity crisis summit for a global appraisal of mass species extinction.

Sudan’s death is another sad chapter in the story of the northern white rhinos - but there is still some hope left that science can help save the subspecies. Ol Pejeta Conservancy and Dvur Králové Zoo are now partnering with IZW Berlin, Avantea Cremona, Embrio Plus / Alta Genetics ZA and the Kenya Wildlife Service to research into IVF technology that will help to ensure that one day in the future, northern white rhinos will once again roam freely in their natural habitat.

Sudan was deeply loved by all at Ol Pejeta especially his caregivers who spent every day with him and developed close relationships with him. The conservancy says hundreds of thousands of people from all over the world had inspirational encounters with Sudan and his work as a conservation ambassador is unparalleled.

As a means to remember Sudan and his amazing life the conservancy has made a global call for his death not to be in vain, asking those who shared some part of his amazing life to post in his memory using the hashtags #RememberingSudan #SudanForever and #MeandSundan on social media. See some of the images and posts shared below. Click here for more info on how to get involved.

2 Daily Lotto players win the prize
Full list of lottery results
Lockdown For
DAYS
HRS
MINS
Voting Booth
How has the delay in schools' opening impacted your life?
Please select an option Oops! Something went wrong, please try again later.
It's a disaster! We're struggling to manage work and kids at home
41% - 1606 votes
It's a struggle, but we learnt lessons from last year's closures
19% - 756 votes
It's a relief, this second wave is bad and kids need to be at home
40% - 1552 votes
Previous Results
Podcasts
PODCAST | MISSING MATTHEW EPISODE 3: Decades of false starts add to a family's despair