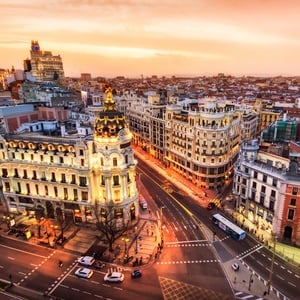 Say hola to these attractions on your next Spanish trip. (Photo: iStock)

Many South Africans are escaping winter, trading it in for a European summer by the coast of Italy or Greece. But summer just got a whole lot hotter in Europe with a heat wave sweeping the continent this week and into the coming weekend.

Highs of 40°C + have been recorded in parts of Italy and Spain and 38°C+ in Germany, France, Belgium and even Switzerland! Add some humidity to that and you've got yourself one toasty climate.

The hottest temperatures of the year is expected still this weekend in the cities of Madrid, Milan, Prague, Munich, and Zurich, says Accuweather. The experts at Accuweather notes that the wave is a result of a storm system stalling over the Atlantic Ocean and some high pressure felt over central and eastern Europe - this same system is also pulling hot air from Africa's side across Europe.

READ: 5 Countries in one week? It's possible in Eastern Europe

What cities are doing to keep cool

Travel and Leisure reports that Paris has installed over 1000 new drinking fountains and that charities are handing out cold bottled water to the homeless. 'Cooling stations' will also be erected in certain parts of the city during the hottest hours of the day.

READ: Local stays, safety and budget influential factors for US and Euro travellers looking to take a summer break

The city has also extended the opening hours of public pools.

When it comes to other cities we can only suggest you eat lots of gelato in Rome and Milan, indulge in iced freddo coffees in Athens, drink many cold Moritz beers in Barcelona and Madrid and gulp down cold bottled Evian water in Geneva.

Or find a historic fountain like the Trevi Fountain and go for an impromptu (though probably illegal) splash!

We live in a world where facts and fiction get blurred
In times of uncertainty you need journalism you can trust. For only R75 per month, you have access to a world of in-depth analyses, investigative journalism, top opinions and a range of features. Journalism strengthens democracy. Invest in the future today.
Subscribe to News24
Related Links
Local stays, safety and budget influential factors for US and Euro travellers looking to take a...
Explore Australia more with this free stop-over booking hack
The saints come marching in: The wooden churches of Poland
Next on News24
WATCH: Travel the world from your phone with these short videos