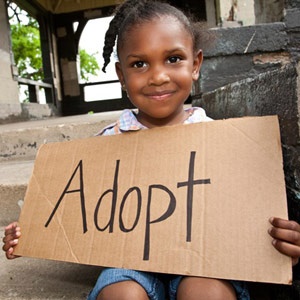 There were 2.8 million orphans in the country in 2017, according to statistics analysed by South African Child Gauge 2018. (iStock, file)

"When I started travelling with him, people would ask me where his mother is. And it made me wonder: is it not normal for a father and son to travel, just the two of them?" says Aloy Gowne, one of South Africa's few single black male adoptive fathers.

Four years after welcoming his son into his life, he's no longer bothered by these comments.

Gowne describes himself as someone who has always been very fond of children, and says it's been in his nature to look out for those younger than him since he was a boy himself.

He never lost this nurturing instinct and frequently worked at various shelters. He could not bear the sight of the poor children, who would do absolutely anything to receive some affection.

It was during his time spent working at a shelter that he realised that he might not be able to help every single abandoned child, but he would be able to help at least one. And so he decided to look into the possibility of adopting a child.

Gowne is among only a handful of black, single men who have chosen to adopt in South Africa. But according to Sue Krawitz, director and founder of child protection organisation Impilo, that is starting to change.

"Single black men are also slowly coming forward. It's not very common, and I think it's quite difficult for them sometimes in their communities, but there are a few trickling through now."

ProCare, the adoption agency Gowne used, confirms the majority of adoptions they facilitate are still for couples.

After all of the formalities and necessary screenings for the adoption process were successfully done, ProCare considered Gowne an ideal candidate.

As soon as this became apparent to him, he began preparing for the big day when he would meet his son, who was just nine months old at the time.

"Fortunately, I had already started looking for specials on Takealot, I guess, for baby stuff. I got a cot, a mattress and a book that was recommended. I also started getting information from the family he was staying with - the foster family - on the things that he liked; the type of food that he likes, his medications and the type of soap he uses. So I started getting the things that he used at the time, just so that there is no shock to the system when he comes home."

His family and circle of friends embraced his decision to adopt and they have accepted Oratile into their lives. Sadly this is not often the case with all adoptive parents when they propose the idea to their immediate family.

Loots says a major obstacle for many people when it comes to adoption, is the idea that we are going to raise our own "little me". But, she adds, life is not always fair and we don't all end up meeting that special person or getting married, and that shouldn't prevent us from being able to fulfil our desire to raise children.

Gowne says raising his son over the past few years has been an amazing experience for him, and that he has learned so much about himself.

Krawitz says an estimated 3 500 children are abandoned in the country every year, although the figure is unofficial and only includes survivors.

"We must remember that a big percentage of children in South Africa are basically raised by single parents, so it can be done."

We live in a world where facts and fiction get blurred
In times of uncertainty you need journalism you can trust. For 14 free days, you can have access to a world of in-depth analyses, investigative journalism, top opinions and a range of features. Journalism strengthens democracy. Invest in the future today. Thereafter you will be billed R75 per month. You can cancel anytime and if you cancel within 14 days you won't be billed.
Subscribe to News24
Related Links
PICS: 90-year-old meets daughter for first time after putting her up for adoption as a baby
Next on News24
WATCH | Cyril Ramaphosa delivers keynote address at Mam' Winnie's 86th birthday celebration