A Vaalwater predator park owner was distraught to discover four of his beloved big cats were poisoned in the early hours of Friday morning.

Justin Fernandes posted an emotional video on his personal Facebook page showing how he discovered three poisoned lions and a tiger at their Jugomaro Predator Park in Limpopo.

Describing it as the worst nightmare of his life, Fernandes can be seen repeatedly wiping away his tears.

Speaking to camera, Fernandes said they were alerted to trouble at 02:00am on Friday morning when one of their wolves started "barking". While walking around the park, Fernandes saw one of their lions, Elvis biting on the gate.

"I thought his jaw was actually stuck in the gate. We got the got they keys and moved him away. As I moved him away, we saw there was something wrong with this cat."

He said one of the other lions, Kai, was already dead.

"While I was busy with Elvis, I heard Taariq and Hercules starting to throw up and we just couldn't get a vet in time to save these cats," he said.

His father, Goosey Fernandes, who spoke to News24 on Friday afternoon said the family kept the big cats in Krugersdorp for two and a half years before they were moved to a farm he purchased in Limpopo.

He told News24 that perpetrators poisoned his baby golden tiger, a white lion and two of his brown lions.

Kai, Taariq, Elvis and Hercules were all bottle-raised by the family since birth. 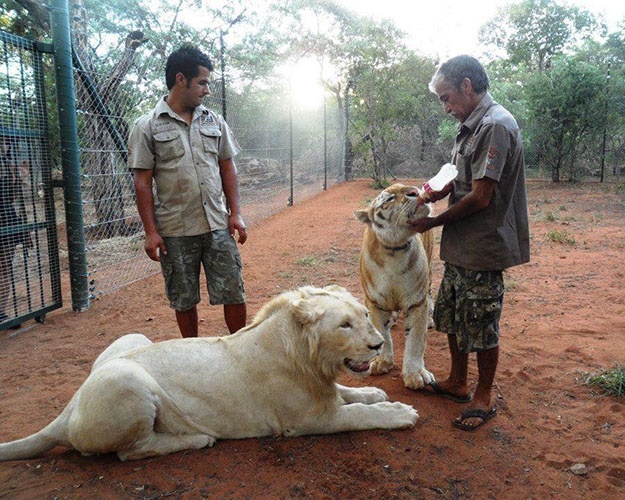 It was believed that the lions were fed liver laced with the poison Temik, more commonly known as "Two-Step".

According to Health24, one teaspoon of the substance, which is more poisonous than arsenic, is enough to kill a grown rhino.

When asked how the family was doing, Goosey simply replied: "Very bad."

Goosey said his son Justin was loading the lions and tiger in a cold room for them to be buried on Sunday.

Limpopo police condemned the resurfacing of "incidents of illegal poaching of protected species".

Lieutenant-Colonel Moatshe Ngoepe said officers found meat at the scene which may have been laced with a poisonous substance.

"The police investigations including the forensic ones will determine the exact cause of death to these animals. The suspects in this matter are unknown and there is no arrest." Justin and Goosey Fernandes relax on a couch with a lion from the park. (Image: Jugomaro Predator Park)

We live in a world where facts and fiction get blurred
In times of uncertainty you need journalism you can trust. For 14 free days, you can have access to a world of in-depth analyses, investigative journalism, top opinions and a range of features. Journalism strengthens democracy. Invest in the future today. Thereafter you will be billed R75 per month. You can cancel anytime and if you cancel within 14 days you won't be billed.
Subscribe to News24
Next on News24
PODCAST | The Story: Teen who murdered his mother gets 25 years behind bars