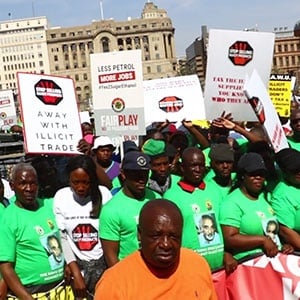 The Food and Allied Workers Union (FAWU) led a march to the offices of the National Treasury in Pretoria on Tuesday.

Rampant tax evasion in the tobacco sector, which threatens jobs and deprives Treasury of much-needed revenue, were among their key grievances.

"Our mandate is to protect the jobs of South African workers because they are the fuel of our economy," Katishi Masemola, FAWU general secretary said.

"We know that the illicit trade of tobacco is a huge problem that continues to cripple the development of our economy."

Participating in the well-attended march were sugar and chicken industry representatives, who demanded that the government address illicit trade and dumping in general.

At the end of the march, a National Treasury representative signed their list of demands and committed that the department would respond within 14 days, as requested.

We live in a world where facts and fiction get blurred
In times of uncertainty you need journalism you can trust. For only R75 per month, you have access to a world of in-depth analyses, investigative journalism, top opinions and a range of features. Journalism strengthens democracy. Invest in the future today.
Subscribe to News24
Related Links
City police make illegal tobacco haul
Malema, Mazzotti and Pauw spat - R1m 'crime proceeds' loan claim surfaces
Next on News24
WATCH | Quick take with Karyn Maughan: Jacob Zuma fails to bar Downer from prosecuting him