WATCH: Land can't belong to the people and the state at the same time - ACDP leader 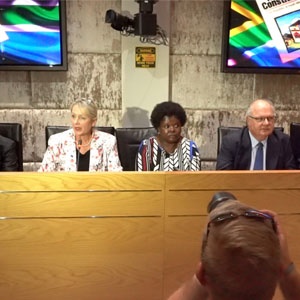 The state and the people cannot own the land at the same time, ACDP leader Kenneth Meshoe says.

Meshoe and four other opposition parties spoke at a press conference in Parliament on Thursday after the Joint Constitutional Review Committee adopted a report recommending that the Constitution be amended to allow expropriation without compensation.

It also recommends that a new committee be tasked with drafting the actual wording of the amendment, which would require a two-thirds majority to pass in the National Assembly when ready.

Opposition parties, including the DA, Cope, ACDP, IFP and FF Plus opposed the amendment for several reasons.

Meshoe said the public was being misled.

"Land cannot belong to the state and to individual black people at the same time," he said referring to the EFF's stance that the state own all land.

The ANC currently opposes the EFF's stance, saying property ownership should still function as it would in a mixed economy.

DA MP Thandeka Mbabama said: "Today, in a convenient coalition, the ANC and EFF voted to take away land rights from South Africans.

"The vote allows government the perfect cover to avoid having to explain their rank failure over the past decades to take land reform seriously," she said.

The opposition parties said they were not against land reform, but believed the processes followed regarding the amendment had been "merely a formality".

The report is expected to be debated in the National Assembly on November 29.